Lies I told about my dog 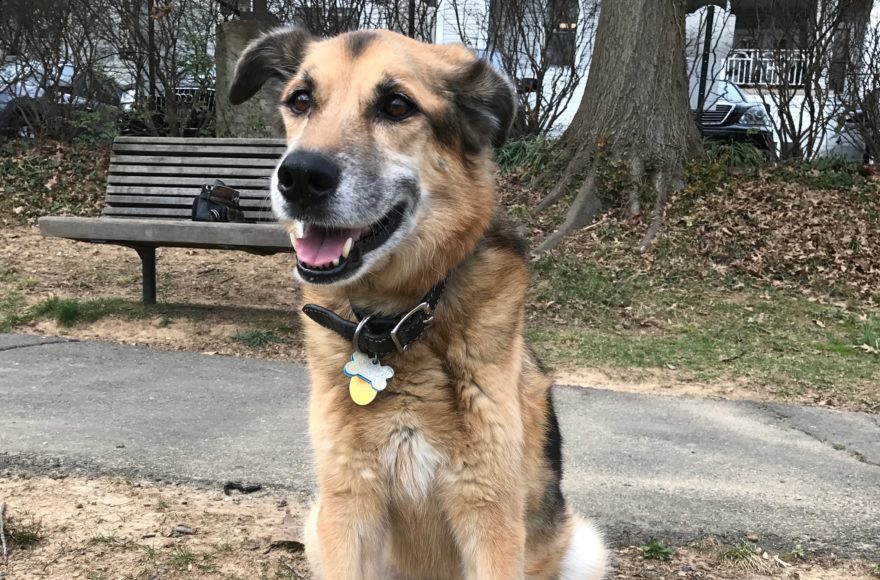 The author’s dog, Zevy, who died of cancer this week. (Ron Kampeas)
Advertisement

(JTA) — I lied a lot about my dog, Zevy, who died the night before last of cancer, squeezed with his final strength under our bed, his favorite resting place.

Here are some of the lies I told.

We fell into a love trap devised by clever Israelis.

Ten or so years ago CHAI, an Israeli animal welfare group, brought close to 40 dogs to the Washington, D.C., area and deployed them in groups of about 10 to four local synagogues.

My first lie was the impression I conveyed when telling friends about how we got Zevy: that on that cloudy Sunday in mid-November 2006, the temple conspired with CHAI and manipulated us — innocent, naive parents — into getting a dog.

So the temple notified us that the CHAI dogs would be in place, and I told my wife, “They’re going to have dogs outside the school, let’s drop the boys off together, and it’ll be fun to play with the dogs. We won’t get one.”

But my older son, who didn’t lie, said this as we drove to Sunday school: “Daddy said you’d want one when you saw them.”

I did say that as a means of getting the boys to scramble into the car 15 minutes earlier than usual, and she did – want one, that is, Zevy especially, because he was not hoppy, or yappy, or eager. He carefully, silently explored the humans, and when she stopped to talk to him, he gave my wife his paw.

Zevy was my wife’s dog.

This was clear from the outset. Walking together, he would occasionally stop just to press up against her, an act not so much of possession or fealty but, I think, of overflowing gratitude. Maybe three days after his arrival, I came downstairs and I found them rolling around on the floor together. Her arms were wrapped around his neck, her head was pressed against his. He seemed to think this was a good idea.

Zevy was a war refugee.

Not so much my lie, but CHAI’s. The dogs, they said, were left behind by Israelis who fled south during the 2006 Lebanon War, and then never reclaimed them when they returned.

My wife spun this into something more elaborate: Zevy, she said, fled cruel Hezbollah fighters in Lebanon and crossed the border into Israel. I tried explaining to her how unlikely this was in one of the most mined strips of land on the planet, but never mind.

I’m Israeli, and the country is awash in strays, in war and in peace. Maybe Zevy was indeed a war orphan. The likelier story is that CHAI was seizing on a headline-making crisis to raise awareness in the U.S. Jewish community of its mission, and selected 39 of its most photogenic strays and put them on a plane. (Zevy was a 2007 CHAI Calendar dog.) I’m fine with this.

Zevy was a shepherd mix.

Hence the name accorded to him by CHAI: German Shepherds are called “zeev,” or wolf, in Israel.

But this is a polite way of saying Zevy was a mutt. A handsome mutt, with the large brown eyes of an empath and ears that perked up when he heard me removing a leash from its hook, or when he saw from his perch at the living room window my wife’s car pull into the rear of the house. A mutt with a rich warm coat of tan and black. But a mutt.

This story is true, so why do I need to lie?

Our routine for a number of years was this: I would walk the boys to the school bus stop with Zevy, and then I would drive him to my mother-in-law’s house, just over a mile away through some of the busiest traffic in Arlington, Virginia. I would park there, walk to the metro and go to work.

The boys would take the school bus to their grandmother’s house and arrive at about 4 p.m. My wife or I would come home at 5 or thereabouts, and Zevy would be first into the car, with a bound and a leap, and we’d head home, back through that mile of heavy traffic.

Once I got off work early, so I picked up the boys, then 8 and 10, directly from school for slices of pizza. Past 4 p.m., I got a frantic call from my mother-in-law: Zevy was gone, escaped from the backyard. I piled the boys in the van and was driving from the pizza parlor to her house when I got another call, from the vet, whose offices are just across the street from our house. A man had seen a stray wandering frantically in traffic and pulled him in. She had Zevy in her office.

Zevy had noticed the boys hadn’t come – he knew precisely when they were supposed to arrive – and made it through a mile of rush hour traffic to our house to find them, to make sure they were OK.

His job, as he saw it, was to watch out for them, to make sure they were in the right place at the right time. He figured out how to tell time to do this. He took extraordinary risks to do this. I don’t know why he saw this as his job, but he did. And he did it constantly and effectively: Once my mother-in-law fell, on the first floor of her house, and he ran upstairs, found her caretaker cleaning a room and whined until she followed him downstairs.

OK, again, not my lie, but one I’m borrowing from the dry cleaner across the street who insists his dog speaks Vietnamese. The dry cleaner says “talk” in Vietnamese and the dog barks. His wife rolls her eyes. The dry cleaner’s dog also grabs laundry sacks once they’re full, with his teeth, and pulls them into the rear of the shop for processing.

Why do we make up stories about talking dogs when all we need to say is that they rescue us?

For 10-15 years (Zevy was 11) our dogs give us unmediated love. In the same span, my two sons transitioned from thinking I was a demigod to contradicting everything I say when they’re not ignoring me.

I understand this transition, I tortured my parents with it, I know it circles around. It doesn’t make it easier.

Friends grow apart. In the early 21st century, we’ve figured out a way to create the illusion that they don’t through Facebook profile photos that are always a little out of date and a little too well lit, through likes and bespoke icons and electronic happy birthday greetings and status updates.

But we do. We meet in person and we’re crankier, more distant, agitated by the figure across from us battered around the edges, stirring up memories of opportunities lost, passions abated.

They do. My wife and sons sought Zevy’s attentions, and he delivered them, in licks and in companionship.

I never did, except to call him over to feed him bits of cartilage I chewed off chicken bones for him — once he obeyed my command to sit, our most visceral transaction.

Yet a couple of years ago Zevy understood I wanted his companionship, even though I didn’t know this.

He would pad down the stairs mid-morning and spend time at my feet as I wrote and made calls, and then pad back upstairs. He was never a hop-on-the-couch dog until he was, resting his head on my lap for a period, and then hopping back down.

This is not a lie.

My dog changed me. He’s gone. I am bereft.