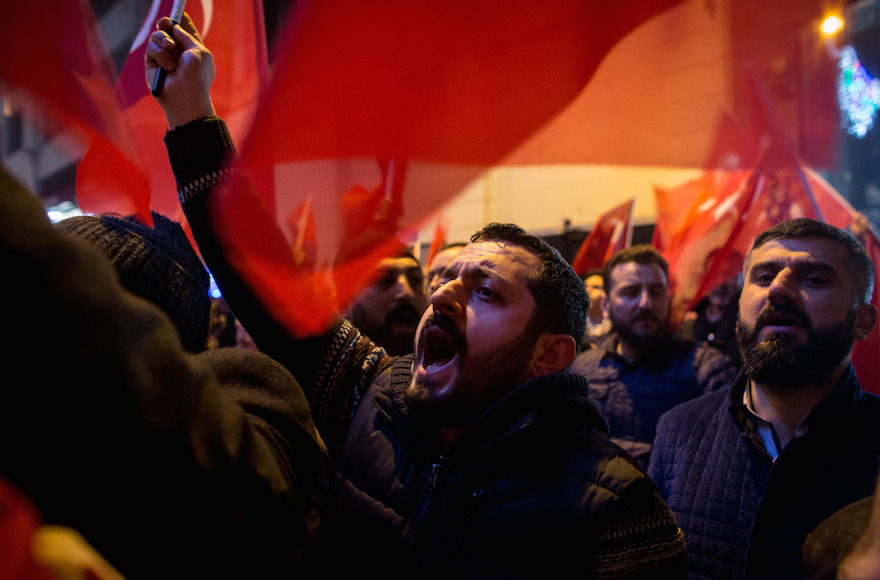 Protesters outside the Dutch Consulate in Istanbul, March 12, 2017, after the Turkish foreign minister was refused entry into the Netherlands. (Chris McGrath/Getty Images)
Advertisement

ROTTERDAM, Netherlands (JTA) — The thousands of people who gathered outside the Turkish consulate of this port city on Saturday patiently waited for hours, chatting with friends and relatives.

Waving Turkish flags, they had gathered on a chilly evening to listen to a Cabinet minister from Turkey arguing in favor of a government-led referendum next month in that country. The referendum would give even greater powers to President Recep Tayyip Erdogan, whose critics already say rules the country with an iron grip.

Erdogan is eyeing the 3 million Turkish nationals living in Europe who can cast their votes in Turkish embassies.

But the chummy atmosphere evaporated as word spread that Dutch police had arrested the minister, Fatma Betul Sayan Kaya. In reality, she was escorted out of the country to Germany on orders of the Dutch government. Ahead of Wednesday’s general elections in the Netherlands — immigration and Islam have become major issues in the heated campaign — the government vocally objected to Turkey’s campaigning on its soil.

Hundreds of young men began confronting police, hurling stones at them while shouting “Allahu akbar” – Arabic for “Allah is the greatest.” Some in the crowd then shouted “cancer Jews” in Dutch at the riot police, who used water cannons to disperse the crowd, according to witnesses. It was one of several incidents recently in the Netherlands where anti-Semitic slogans were shouted at demonstrations that had nothing to do with Jews.

Occurring as the far right prepares to make historical gains in the voting, the riots in Rotterdam, where five people were moderately injured, triggered the worst diplomatic crisis in years between Turkey and the European Union, and reopened a polarizing debate about the loyalty of some Dutch of Turkish descent.

But for Dutch Jews, the affair also underlined a growing concern over the defiance of a minority among local Muslims, whose anti-Semitic attitudes and actions are generating an anti-Muslim backlash in a once-tolerant society.

“We saw again that the word ‘Jew’ and ‘homo’ are curse words in these groups,” Esther Voet, the editor-in-chief of the Nieuw Israelietisch Weekblad, told JTA. “Those protesters have such hostility toward Jews that it just comes out.”

Voet also called the violent protesters in Rotterdam a “fifth column” in Dutch society, adding that she was “in some ways glad the riots exposed what many would rather deny.”

Across Western Europe, surveys consistently show a relatively high prevalence of anti-Semitic sentiment among Muslims, many of whom associate Jews with an establishment they feel is oppressive and hostile to their identity and faith.

But the use of slogans about Jews during violent confrontations that do not involve Jews is a recent development. And it is shocking to many European Jews because “it shows the centrality of anti-Semitism as a core identity value” among some Muslim immigrants and their descendants, according to Manfred Gerstenfeld, a scholar of anti-Semitism who has written extensively about the Netherlands.

In 2014, amid protests over Israel’s strikes against Hamas in Gaza, anti-Semitic hostility led dozens of French Arab rioters to besiege a Paris synagogue, which community members defended for long minutes in a savage street brawl as police scrambled to dispatch officers in time to prevent a bloodier scenario.

Yet despite several close calls – Dutch police in 2015 arrested several alleged Islamists suspected of plotting to blow up a synagogue in Amsterdam — the Netherlands in recent decades has seen neither major jihadist attacks nor deadly incidents of anti-Semitism of the kind that have occurred in France and neighboring Belgium since 2012.

In covering the Rotterdam rioting, the Dutch media largely ignored the anti-Semitic shouts, focusing instead on the far wider ramifications of what quickly evolved into a showdown featuring Turkey, the Netherlands and Germany.

After the incident with Kaya and the Dutch government’s refusal to admit into the country Turkish Foreign Minister Mevlut Cavusoglu, Erdogan accused both Germany and Holland of having a “Nazi heritage,” leading to condemnations of Turkey by other EU leaders and Jewish groups. Turkish protesters subsequently were allowed to gather outside the Dutch Embassy in Ankara, leading to its brief closure as the Dutch and Turkish governments exchanged threats of financial sanctions.

“All in all, a good show for Dutch Prime Minister Mark Rutte, who wants to flex muscles ahead of the election to avoid hemorrhaging votes to the far right,” said Maurice Hayut, a Morocco-born Jewish-Israeli filmmaker who lives in Amsterdam.

“Also a great show for Erdogan, who is portraying himself at home as the champion of the Turkish and Muslim causes against the hostile West,” added Hayut, who has made two documentaries about anti-Semitism and Islam in Europe.

Nonetheless, for the Dutch chief rabbi, Binyomin Jacobs, the anti-Semitism on display in Rotterdam raised the specter of violent attacks, like the recent attacks on synagogues in Paris.

“I hope I am wrong, but I wouldn’t be surprised if this happens also here,” Jacobs said when asked whether he believed that following the riots, Muslim radicals may turn violent against Jews.

Jacobs’ home in Amersfoort has been vandalized several times in recent years, and he has said that he would leave the Netherlands if not for his communal duties.

Against this backdrop, many Dutch Jews are joining other countrymen in supporting the Party for Freedom led by Geert Wilders, a stridently anti-Islam lawmaker who last year was convicted of inciting discrimination for promising during a 2014 speech to make sure the Netherlands has fewer Moroccans.

Wilders’ party, which opposes the construction of mosques and seeks to end immigration from Muslim countries, is currently the third largest in the Dutch parliament. However, with the elections at hand, the Party for Freedom is in a tight race with the ruling center-right People’s Party for Freedom and Democracy to become the largest.

Wilders’ popularity among Dutch Jews – a community in which many have bitter memories of the effects of xenophobic rhetoric — is lower than among the general population. But it is nonetheless significant.

In a poll of more than 1,300 Dutch Jews conducted earlier this month, Wilders’ party finished third with 10 percent of the vote. According to polls, it is poised to receive 15 percent of the general vote. Among Jews, 17 percent chose the People’s Party for Freedom and Democracy and 11 percent picked Labor.

By contrast, in a 2010 poll of Dutch Jews, only 2 percent of respondents said they supported Wilders.

Wilders’ electoral success with some Dutch Jews is helped by his professed love and commitment to Israel, a country where he lived for two years in the 1980s, and to what he calls “Judeo-Christian values” that he says are threatened by Islam. But it suffered over his party’s support in 2010 for a ban on the ritual slaughter of animals. The ban, passed by parliament, ultimately was scrapped by the Dutch Senate in 2012.

Ultimately, though, Wilders’ measure of popularity among Dutch Jews “owes to fear” rather than to his credentials within that community, according to Hayut, the filmmaker.

In France, too, the far-right National Front party under Marine Le Pen has made inroads into the Jewish community. In a poll from 2014 among 1,095 French Jews, her party enjoyed the support of 13.5 percent of respondents. She currently is the leading candidate in polls ahead of the first round of the presidential election next month with approximately 25 percent of all voters.

Le Pen has courted Jewish voters and worked to rehabilitate the racist image of the party founded by her father, Jean-Marie Le Pen, who has multiple convictions for Holocaust denial and inciting racial hatred against Jews. And while she lacks Wilders’ pro-Israel and philo-Semitic credentials, her message resonates with some Jews who hope she will shield their community from attacks by Muslims.

“When you are afraid, you look around to see who will protect you, especially in a community scarred by the Holocaust,” Hayut said. “And like the French Jewish community, the Dutch one is afraid of Muslims.”