The false choice between Zionism and feminism 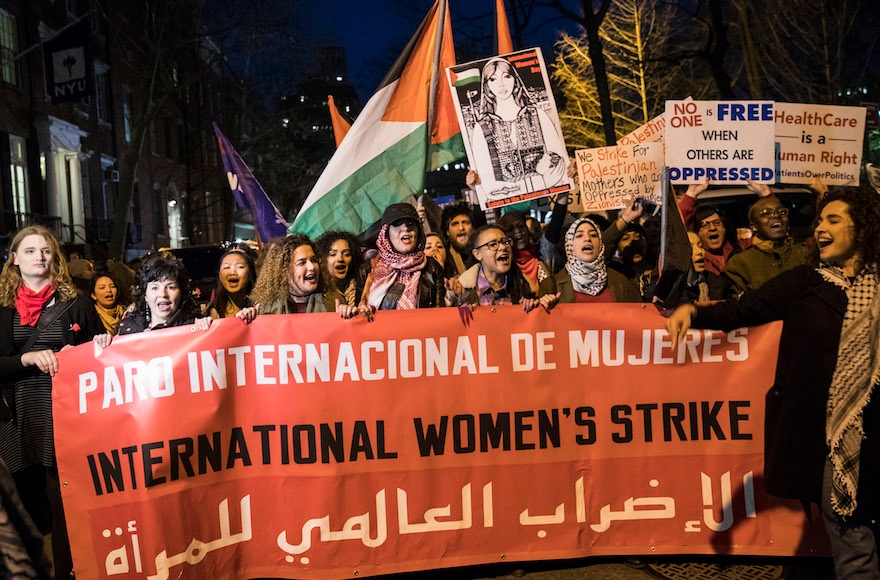 NEW YORK (JTA) — Two weeks ago the Palestinian-American activist Linda Sarsour started a fundraising campaign to help restore the graves at a St. Louis-area Jewish cemetery damaged by vandalism. The Jewish community there and across the country generally welcomed the effort — wildly successful, as it turned out — as a lovely moment in interfaith solidarity.

“It’s sad that it’s happening in the midst of tragedy, but it’s a beautiful gesture,” Rabbi Brigitte Rosenberg of the United Hebrew Congregation in St. Louis told the Forward.

Gratitude like Rosenberg’s largely drowned out the voices, mostly from the right, of those who charged that Sarsour’s efforts were a “cynical attempt” to distract critics from her support for the Boycott, Sanctions and Divestment movement that many Jewish groups see as nothing less than an effort to delegitimize and dismantle Israel.

A basic principle of coalition building – of civil society, in fact – is putting aside disagreements on specific issues to work together on the things you can agree on. In this case, Jews and Muslims have a mutual self-interest in standing up to bigotry, even if they disagree on some major issues.

If Sarsour accepts this principle, it’s not clear from her role as an architect of International Women’s Strike USA, the grassroots feminist movement that organized events around the world on International Women’s Day. In addition to calling for gender equality, an end to racial and sexual violence, and protection of reproductive rights, the group’s platform includes a plank “For an Antiracist and Anti-imperialist Feminism” that demands “the decolonization of Palestine.”

“We want to dismantle all walls, from prison walls to border walls, from Mexico to Palestine,” the platform continues.

(It is important to note that “Palestine” is mentioned twice in the brief platform; leaving aside Trump’s Mexico wall, no other country or people is specifically singled out as a cause to be embraced or a target for activism – not India or any one of 49 nations that don’t criminalize marital rape; not Pakistan, where just one-quarter of women are in the labor force; not Mali, where adult women’s literacy is only 29 percent.)

This week, Sarsour responded to a critic who asked why activists need to check their Zionism at the door when signing on to a feminist platform.

“I identify as a Zionist because I support Israel’s right to exist as a Jewish state,” Emily Shire wrote in The New York Times. “I am happy to debate Middle East politics or listen to critiques of Israeli policies. But why should criticism of Israel be key to feminism in 2017?”

Asked by The Nation to respond to Shire, Sarsour was unequivocal: If by Zionist you mean someone who doesn’t accept the platform’s singular focus on Israel, then no, you can be a Zionist or a feminist, but you can’t be both.

“It just doesn’t make any sense for someone to say, ‘Is there room for people who support the state of Israel and do not criticize it in the movement?’ There can’t be in feminism,” Sarsour said. “You either stand up for the rights of all women, including Palestinians, or none. There’s just no way around it.”

Sarsour can’t seem to imagine a movement in which activists might disagree on certain issues but can work together on others. In the name of intersectionality, she is willing to lose useful allies who cannot sign on to every plank of her platform.

In her remarks, Sarsour also alleged that Palestinian-American women hesitate to get involved in social justice causes because they fear becoming “an immediate target of the right wing and right-wing Zionists.” Indeed, she has often been accused of having ties to Hamas, on fairly wispy evidence.

But Sarsour also focuses on “right-wing Zionists” at the exclusion of all others. She doesn’t leave room for Israelis who might share her social justice agenda, not only when it comes to feminism but to Palestinian women as well. First she raises Palestine as literally the only global cause worth mentioning. Then she offers a false choice between supporting Israel and feminism.

Such thinking seems infectious. Writing about the Shire-Sarsour debate in New York magazine, Eric Levitz explained, “To a Palestinian woman in the West Bank, no issue may appear more central to her liberation than the end of the Israeli occupation. To a Zionist woman in Tel Aviv — whose family tree lost branches to Hitler and then to Hamas — no issue may seem less relevant to her interests. The feminist movement has no choice but to represent one woman, and not the other.”

Really? No choice? Because I can point to Israeli women who have lost family members in the Holocaust and to terrorism, and who care deeply about women’s – and all people’s – rights in both countries.

Like members of the Parents Circle, a group of Palestinian and Israeli families who have lost relatives to terror and violence but still work together on coexistence. Or the Coalition of Women for Peace, an Israeli feminist organization founded in 2000 following the outbreak of the second intifada. The women who belong are “committed to ending the occupation and creating a more just society, while enhancing women’s inclusion and participation in the public discourse,” according to its mission statement.

Or Women Wage Peace, who two years ago led a protest march from northern Israel to Jerusalem to demand that Israel restart the peace process with the Palestinians. WWP describes itself as above the political and religious divide, seeking to do something that Sarsour insists “doesn’t make any sense”: creating allies among people who disagree.

Members of all three groups might happily sign on to the Women’s Strike platform — or they might bristle at how the platform aims to alienate Israelis and their supporters by making Palestine its only specific nationalist cause.

The Women’s Strike platform is not just asking followers to “criticize” Israel, but to do so in terms insisted upon by Sarsour and the BDS movement: Israel as a colonialist and racist enterprise. There’s no mention of peace, only of a “de-colonization” of a Palestine whose borders are never specified — because, one suspects, the BDS movement cannot bring itself to recognize Israel’s right to exist. There is no room in the coalition for the Israeli — left, right or center — who wants women on both sides of the Israeli-Palestinian divide to enjoy full rights, but who believes with good reason that the platform’s framing of the conflict is a recipe for eternal violence.

According to the Women’s Strike platform, “We celebrate the diversity of the many social groups that have come together for the International Women’s Strike. We come from many political traditions but are united around the following common principles.”

Like the Black Lives Matter platform issued last year, however, the Women’s Strike version seems engineered to specifically exclude one social group: supporters of Israel who do not buy into a one-sided condemnation of Israel, who believe it doesn’t deserve to be singled out among all the conflicts in which men and women have been oppressed, marginalized or exploited — and who don’t accept that the only solution worthy of discussion is the one that leaves no room for a Jewish state.