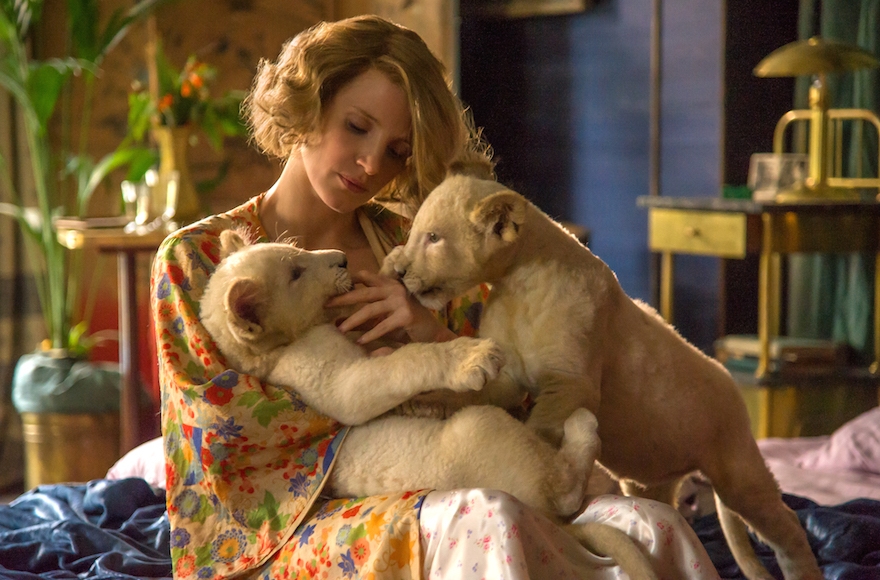 There’s Maya, the fictional CIA agent in “Zero Dark Thirty,” whose work led Seal Team Six to Osama bin Laden; Melissa Lewis, the heroic mission commander who refuses to abandon a teammate in “The Martian,” and Elizabeth Sloan, the accept-no-prisoners Washington lobbyist who takes on the gun industry in “Miss Sloan.”

“I look for characters that challenge the status quo,” Chastain, who snagged a Golden Globe for her work in “Zero Dark Thirty,” told JTA in a telephone interview. “I know not every woman is a strong woman. But I am definitely inspired by those characters who push against the box society has put them in.”

It’s no surprise, then, that she jumped at the opportunity to portray Antonina Zabinski in “The Zookeepers Wife.” It’s an emotionally moving film about World War II that tells the true story of a heroine and her husband, Jan, who put themselves — and their children — at great risk in order to save 300 Jews by hiding them at the Warsaw Zoo, which they ran.

Before the war, the zoo was considered one of the finest in Europe. People came from all over to walk its grounds, view the animals and perhaps catch a glimpse of the quirky Antonina on one of her daily bicycle rides around the facility, often with a menagerie of ostriches trailing behind.

But as the film chronicles, bombs leveled much of the zoo during the Nazi invasion of Poland in 1939, killing a substantial number of its animal residents. The Zabinskis were spared, and might have lived a relatively comfortable life during the occupation: A prewar colleague from Berlin, Lutz Heck (Daniel Brühl), was appointed the Reich’s chief zoologist. He protected the couple, in part because of his respect for their accomplishments in building a world-renowned zoo, and in part because of his not-so-hidden crush on Antonina.

Still, Heck had many of their best (and rarest) remaining species transferred to Berlin for breeding purposes, leaving the zoo relatively empty. It was a decision the Zabinskis took full advantage of — Jan (played by Johan Heldenbergh) used the empty cages to store arms for the resistance and eventually went off to fight with the partisans himself. They also hid a close personal friend, sculptress Magdalena Gross (Efrat Dor, an Israeli actress).

And then they decided to do more. They convinced Heck to let them raise pigs on the grounds, ostensibly to feed the troops. Also, they promised to gather the slop accumulating in the nearby Warsaw ghetto to feed the animals. To Heck, it seemed like a win-win — but, in fact, the Zabinskis and other members of the resistance smuggled families into the zoo by putting them in barrels and covering them with the garbage intended for the pigs. Then they were hidden in empty cages and in a network of tunnels. 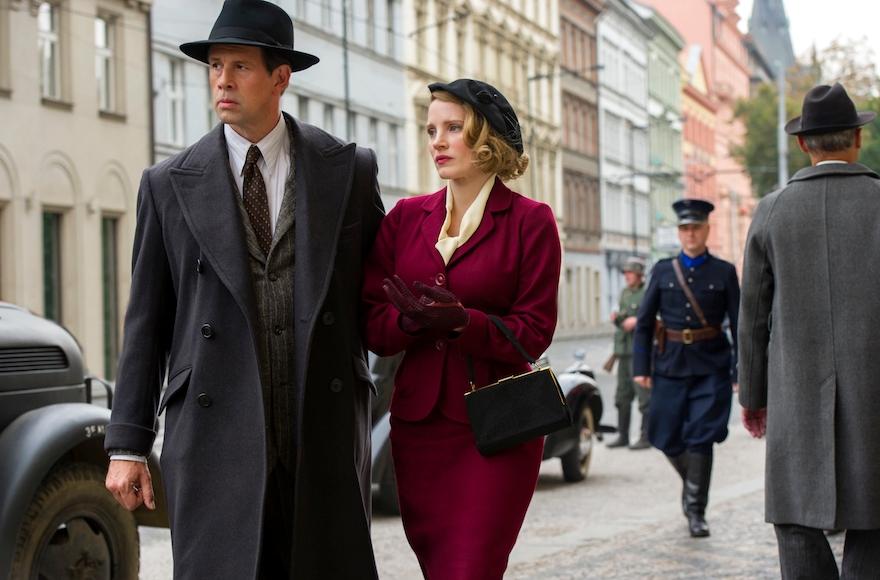 Nazi troops were a constant presence — a sneeze or a child’s cry at the wrong moment could lead to tragedy. In fact, there were several occasions when it seemed the jig was up, all of which heightens the tension in a taut, well-constructed film that follows the Zabinskis from prewar good times through the conflict and its ever-present danger and, ultimately, to the couple’s poignant reunion at the war’s end.

Thanks to the Zabinskis’ heroism, some 300 were hidden and ultimately transferred by the resistance to safety.

Over the course of the film, Chastain cascades through a range of emotions reflecting the many characters she subsumes — zoologist, wife, mother, spy and temptress to Heck — in a bravura performance that exudes confidence and strength.

I ask Chastain if she is strong in real life.

“I’m OK pushing against the constraints society expects me to be in,” she said.

Was she always that way, or did success embolden her?

“I think I’ve always been that way. I’d speak up when something wasn’t right or honorable.”

But Chastain quickly notes standing up to authority is often easier said than done.

“I could immediately say, ‘yes, I would have done [what the Zabinskis] did,’ but such an easy answer would diminish the strength they showed and sacrifice they made,” she said. “It doesn’t acknowledge that her kids could have been killed. I hope I’m never challenged the way she was. She put the welfare of the many over the welfare of the few and was willing to sacrifice everything to do the right thing.”

When offered the role, Chastain said she met with the director, Niki Caro, and immediately was impressed by the script.

“The story — it’s world history,” she said. “In American schools you don’t learn about women in history. It was an honor for me to portray this incredible female.”

“The Zookeeper’s Wife” is adapted from the book of the same name by Diane Ackerman that had relied upon Antonina’s diaries. It’s a tale of bravery and selflessness, especially since once Jan went off to war, Antonina was left to handle all the duties by herself.

The Zabinskis are enshrined in Yad Vashem’s Righteous Among the Nations. While Chastain did not visit the Holocaust center in Jerusalem, she still managed extensive research for the role.

“I read the book, of course, and visited the Warsaw Zoo,” she said. “I met with her daughter [Teresa], who was a baby in the film, and learned about the family from a personal point of view. I also went to Auschwitz. I’d read about it, of course, but had never been to a concentration camp.”

Her experiences made her realize how contemporary the film’s message is.

Chastain’s compassion for the underdog is well rooted. Though she doesn’t talk about it much, she was born to a single mom who at times had to shoplift food to feed a young Jessica and her sister. I gingerly broach the topic and ask how it impacted her career and life.

“I think growing up in a situation where money wasn’t necessary for happiness actually helped me,” she said. “I realized when pursuing an acting career, it’s not something you pursue for money. I pursued it realizing I could live without. I grew up without.

“I grew up without many things, and because of that, I have compassion for those who have less. I’m very happy paying taxes so people can go to school and have health care because I know what it’s like to have little.”