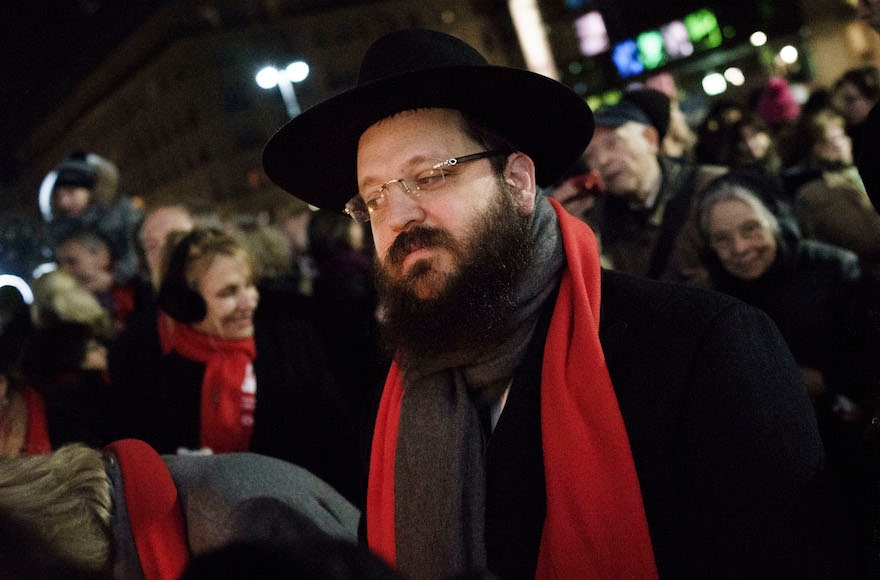 (JTA) — It’s literally become old hat: Sending a Jew wearing a kippah into the streets of a European city to see how non-Jews react. A so-called “anti-Semitism test,” it’s been done, ad nauseam.

So I was a bit surprised last week when I saw yet another article on the topic on the website of the German newspaper Die Zeit. Reporter Mariam Lau accompanied Berlin Chabad Rabbi Yehuda Teichtal, an official Orthodox rabbi for the community of Berlin, on a walk through a heavily Muslim neighborhood to see how people would react.

Predictably, the usually cheerful and upbeat Teichtal — who, as Lau noted, can’t help but look Jewish with his black hat, beard and long coat — drew many stares and at least one overt anti-Semitic comment as he walked down Sonnenallee, a boulevard that’s known to some locals as Arabic Street.

When I posted the article on Facebook, little did I expect a firestorm of reactions from opposing Jewish camps: Those who firmly believe Europe is a hotbed of Muslim anti-Semitism; those who think the danger is exaggerated for political purposes, and those who find such experiments to be non-scientific and therefore prove nothing.

Why was this “test” done now?

“The Central Council of Jews has been talking about ‘no-go areas’ or ‘problem districts’ for Jews in Berlin for quite a while,” wrote Lau, who took Teichtal for his 45-minute walk in Neukölln, a neighborhood that the headline of the article described as “the heart of Berlin’s Arab community.”

Another reason may be that the Muslim population in Germany is growing rapidly. At the close of 2015, approximately 4.4 million to 4.7 million Muslims were living in Germany.

And then there are the clicks that articles about anti-Semitism generate — it may be one reason why the editors translated the article into English. They know American Jews are worried about Europe, their fear fueled by a volatile mix of real news and right-populist incitement.

So there has been a rash of such experiments. Two years ago, the Berlin kippah walks took off following deadly attacks by Muslims against Jews in France, Belgium and Denmark. In early 2015, both the Daily Mail and Vice magazine filmed Jews walking through various neighborhoods of the German capital wearing skullcaps. Neither fellow reported anything untoward.

As for Teichtal’s recent walk, along with the stares, passers-by in one car rolled down their window and said something about the “Yahoud,” or Jew. That seemed to have been the most overt negative response. But he also reportedly drew some smiles in a part of town that rarely sees an evidently Orthodox Jew.

The reactions to the Zeit article on my Facebook wall were swift and vehement.

One friend noted that the real news was buried: Police stats show that most of Berlin’s 170 reported anti-Semitic crimes in 2016 were perpetrated by neo-Nazis. (The article also said that the Berlin Anti-Semitism Research and Information Center recorded many more incidents, but did not say anything about the perpetrators.)

While most commenters agreed that the article played with stereotypes about Muslims, others insisted that the even worse danger to Jews was other Jews who refuse to see the truth.

One friend took issue with Teichtal’s advice regarding a 6-year-old child who was teased in school for being Jewish.

“Do nothing at all? I don’t agree,” wrote a Facebook friend in Germany whose child once was called a “dirty Jew” at school. The incident was reported to the principal and “was even taken up by the ethics teacher as an example of how not to treat your classmates.”

A tense walk through Neukölln may prove a good jumping-off point for discussing pressing — and real — worries. But such a black-and-white test proves little in a complicated and ever-changing reality.

After all, as Lau herself noted, just north of Sonnenalle is a hip Israeli cafe — “actually more of an apartment-cum-shop with a record store” — that declares its identity with bold Hebrew lettering.

Its owner, Doron Eisenberg, told Lau that he’s never had any trouble with his Muslim neighbors or with anti-Semitism. And he’s been there much longer than 45 minutes.