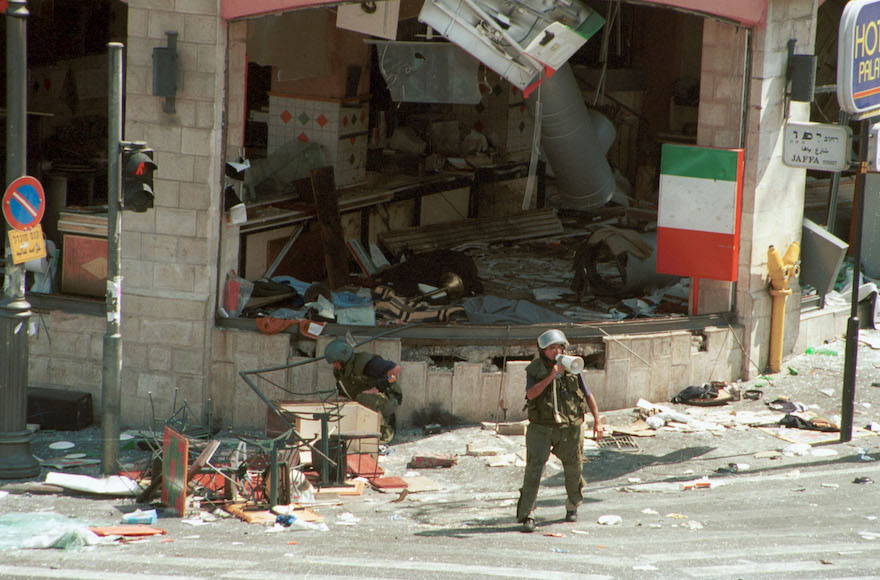 Israeli soldiers checking for explosives at the site of a Palestinian suicide bombing that killed 15 people in Jerusalem, August 9, 2001. (Courtney Kealy/Getty Images)
Advertisement

(JTA) — The United States charged a Jordanian woman who was part of the prisoner exchange for kidnapped Israeli soldier Gilad Shalit in a Jerusalem suicide bombing that killed 15, including two Americans.

On Tuesday, the Justice Department unsealed the charge against Ahlam Aref Ahmad Al-Tamimi, who is in her mid-30s and and also is known as Khalti and Halati, for conspiring to use a weapon of mass destruction against American citizens.

Al-Tamimi is accused of being involved in the suicide bombing at a Sbarro pizza restaurant that left 122 injured, including four Americans. The charge had been sealed since July 2013.

In 2003, she pleaded guilty in an Israeli court to multiple counts of murder and was sentenced to life in prison, but was released and returned to Jordan in 2011 as part of the controversial deal to free Shalit in which Israel exchanged 1,027 prisoners. The Justice Department is seeking her extradition to stand trial; Jordan forbids the extradition of its nationals.

According to the U.S. affidavit, Al-Tamimi traveled with the suicide bomber, led the bomber to a crowded area and provided instructions on how to detonate the weapon. She had agreed to carry out attacks on behalf of Hamas’ military wing, the affidavit said.

The FBI said it had placed Al-Tamimi on its Most Wanted Terrorist List.

“The charges unsealed today serve as a reminder that when terrorists target Americans anywhere in the world, we will never forget — and we will continue to seek to ensure that they are held accountable,” McCord said in the statement.

U.S. Attorney Channing Phillips for the District of Columbia said the U.S. had not forgotten the victims of the 2001 bombing.

“We will continue to remain vigilant until Ahlam Aref Ahmad Al-Tamimi is brought to justice,” Phillips said.