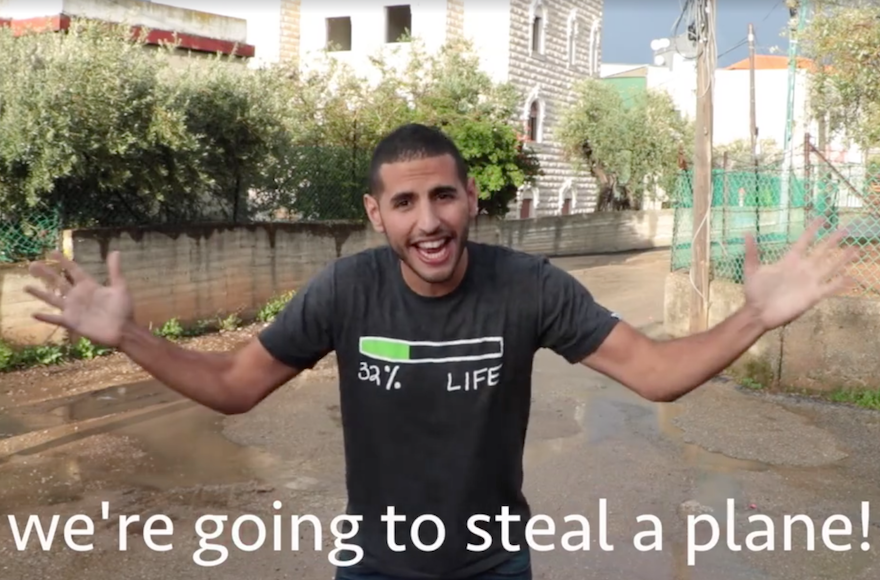 TEL AVIV (JTA) — Arab Israeli Facebook star Nuseir Yassin wants you to help him “steal a plane.” It’s for a good cause.

In a video Thursday, he laid out a plan to get Turkish Airlines to fly food to Somalia, where over 6 million people need are at risk of starvation. Joined by Ben Stiller and a social media dream team, he urged his more than 600,000 followers to promote the hashtag #TurkishAirlinesHelpSomalia.

“We’re going to steal a plane — all of us, the people of the internet,” he said. “To get the airline’s attention, we’re using a hashtag like this one.”

The roughly one-minute video was the 341st Yassin has posted to his Nas Daily Facebook page in as many days. Within several hours, it had been shared well over 100,000 times.

A Harvard University graduate from the town of Arraba in Israel’s Lower Galilee, Yassin last year quit his well-paying job as a computer engineer at PayPal in New York to start making the videos, which he films and uploads from around the world. The motivation was simple, he explained in video No. 339: “Look, I’m just a 25-year-old hairy kid who wants to live the best possible life and put it on Facebook in one-minute videos. That’s it.”

In his videos, Yassin wears a grey T-shirt emblazoned with a gauge that is 32 percent full, explaining that he has already used up that fraction of his life.

Yassin told JTA he had never before been part of a social media campaign for a cause, but the urgency of the drought in Somalia lent itself to the Internet action.

“There are two forms of media now. There’s the traditional media that Donald Trump hates, and there are people like us,” he said, referring to social media influencers. “We reach tens of millions of people, which is insane. One of our videos on social media can have the same impact as a story on CNN, and fast.”

Somalia recently declared its worsening drought a national disaster amid fears of a full-blown famine. The United Nations has warned that half the country’s population is under threat, and at least 360,000 children are severely malnourished, which means they will die within weeks unless they receive food. A similar crisis in 2011 killed nearly 260,000 people, more than half of them before the famine was even declared.

If you have 2 minutes and 20 seconds check this out. #TurkishAirlinesHelpSomalia pic.twitter.com/r0u3xh5spG

Yet Yassin’s video was characteristically even keeled and optimistic, a tone that has been central to his brand and allowed him to win both Jewish and Arab fans. While living at his family’s house in Israel for the past few months, he has posted videos about the West Bank, playing backgammon for peace, and how safe — though expensive — Israel is. He also invited all of his Facebook viewers to visit his house (dozens showed up) and a haredi Orthodox Jewish friend to tour his hometown, and documented both experiences.

Yassin said he makes no money from his Facebook page but earns a few thousand dollars a month by filming one-minute video advertisements, consulting and holding workshops.

Next week, he plans to fly Greece to film workers from IsraAid, an Israeli disaster relief organization, as they distribute food to Syrian refugees. After that, he might go to Rwanda. But he said Nas Daily is not really about humanitarian work or even solving the problems of his native country.

“I’m apolitical,” he said. “I started this just to live my life. When it stops being fun, that will be the end.”