US urges UN to withdraw report accusing Israel of apartheid 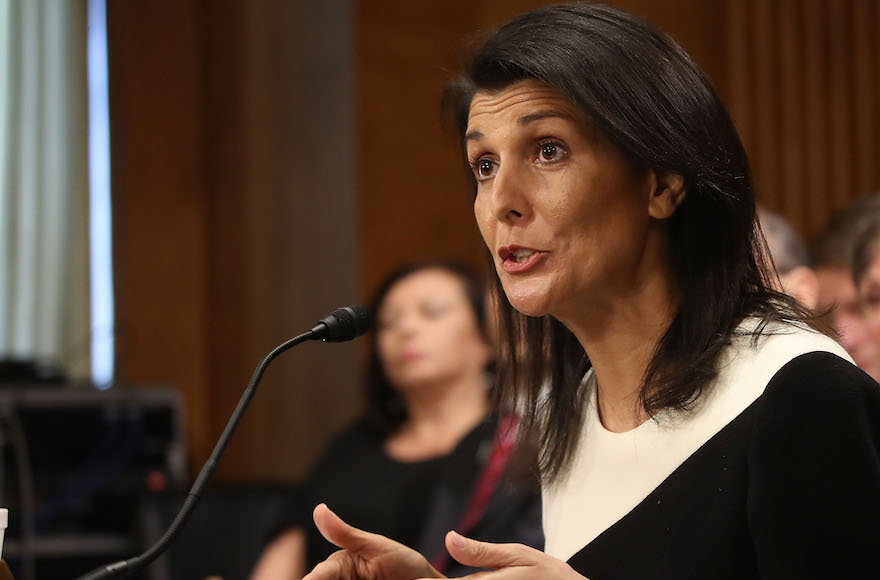 (JTA) — The United States called on the United Nations to withdraw a report that accused Israel of committing apartheid against the Palestinians.

The U.N. Economic and Social Commission for Western Asia — an agency based in Beirut, Lebanon, and comprised of 18 Arab member states, including what is identified as the State of Palestine — released the report Wednesday. In its conclusion, the report says it “establishes, on the basis of scholarly inquiry and overwhelming evidence, that Israel is guilty of the crime of apartheid.”

Nikki Haley, the U.S. envoy to the United Nations, slammed the report.

“The United States is outraged by the report,” Haley said in a statement. “The United Nations Secretariat was right to distance itself from this report, but it must go further and withdraw the report altogether.”

“The attempt to smear and falsely label the only true democracy in the Middle East by creating a false analogy is despicable and constitutes a blatant lie,” Danon said in a statement.

A U.N. spokesman said the report was published without consulting the international body’s Secretariat and “does not reflect the views of the secretary-general,” Antonio Guterres.

The report was prepared by Richard Falk, a former U.N. special rapporteur on Palestinian human rights who has compared Israel’s treatment of the Palestinians to the actions of the Nazis, and Virginia Tilley, a professor of political science at Southern Illinois University.

The Conference of Presidents of Major American Jewish Organizations called on Guterres to directly reject the report.

“This latest outrage perpetrated against Israel by a UN body must not be allowed to stand,” said a statement quoting the Presidents Conference chairman, Stephen Greenberg, and executive vice president, Malcolm Hoenlein. “Secretary General Guterres should unambiguously reject the ESCWA report and undertake to prevent similar unwarranted attacks in the future.”