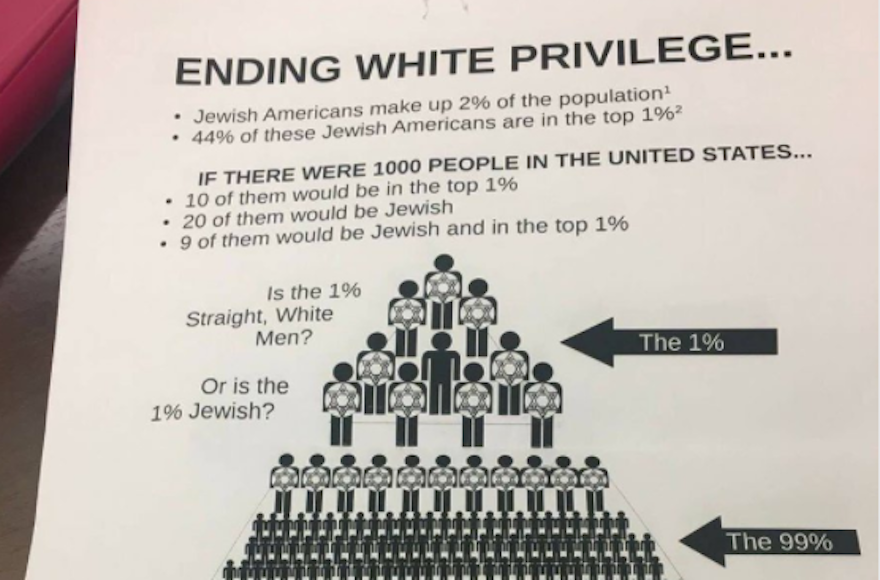 (JTA) — Fliers claiming that “Jewish privilege” is the key to social injustice in the United States were found on the campus of the University of Illinois at Chicago.

The fliers, found Tuesday and Wednesday in different locations, claim in bold letters that “Ending white privilege starts with ending Jewish privilege.” Citing survey data, the fliers then claim that 44 percent of Jewish Americans are in the “one percent,” or the top economic percentile in the United States.

Metro Chicago Hillel, which serves UIC, asked the university to investigate the fliers and convened a meeting Wednesday with the school’s dean of students. On Wednesday, the university released a statement condemning the flier and announcing that the administration will investigate.

“Today, anti-Semitic posters were found on campus that defame, insult and negatively portray Jewish members of our campus community,” the statement said. “Such actions do not reflect the values we hold as a community. Acts that invoke hatred or violence toward members of our community will not be tolerated on our campus.”

The 2009 Pew report recited in the flier, “Income Distribution Within U.S. Religious Groups,” shows that 46 percent of Jewish households have an annual income of $100,000 or more.  According to some estimates, household income must be at least $350,000 to qualify for the 1 percent.