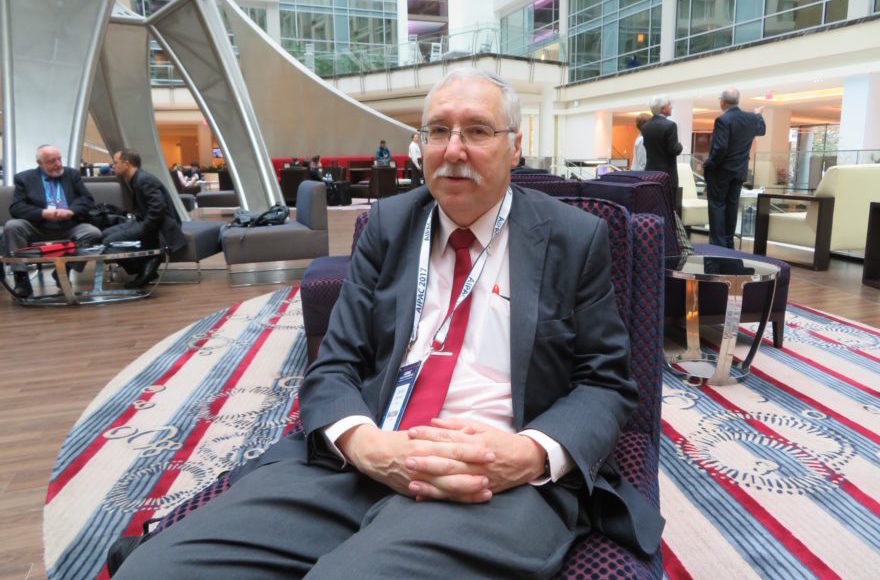 (JTA) — Despite the partisan sniping at this year’s AIPAC conference, one issue that garnered consensus among the lawmakers and lobbyists was the backing of bills targeting the Boycott, Divestment and Sanctions movement.

So it might have been jarring for some of the activists to be approached by an avuncular, kippah-clad fellow who lobbied against an anti-BDS bill — and even more jarring when they learned that their interlocutor was Gerald Steinberg, the founder of NGO Monitor, which targets the very groups advancing BDS.

It was an Israeli bill, adopted last month by the Knesset, that bans entry to foreigners who publicly call for boycotting the Jewish state or its settlements. The measure has already scored a hit, keeping out a prominent British pro-BDS activist.

Steinberg argued that the bill accomplishes little — Israel, like every country, already has broad discretion about whom to let into its borders.

Instead, he said, critics of Israel are using the bill as evidence of the Jewish state’s anti-democratic tendencies. Steinberg added that liberal allies of Israel in studies associations, who are seeking to block anti-Israel resolutions, are being undermined.

“The visa law doesn’t do anything, but it alienates the allies we have for these fights,” he said.

It may seem odd to hear Steinberg extol liberal allies — he and NGO Monitor have had a contentious if not adversarial relationship at times with the liberal end of the Zionist spectrum, particularly the New Israel Fund. (NIF will not fund “global” BDS activities against Israel, but will support groups that targets goods and services from settlements.)

But he suggested those fights are among family. Steinberg looked horrified when he recalled how Jennifer Gorovitz, an NIF vice president, was detained and questioned by Israeli authorities for 90 minutes upon arriving in the country in February.

“It would be useful for American Diaspora groups, including Reform and progressive groups, not just to whack back at Israelis, but to take time to educate” about the best ways of combating BDS, he said.

(In an earlier interview, Rabbi Rick Jacobs, the president of the Union for Reform Judaism, said his movement was doing just that, and made clear to Israeli Prime Minister Benjamin Netanyahu in their most recent meeting how critical it was to combat BDS to maintain support for the two-state solution. “Without a strong commitment on two states, it’s pretty hard to work on BDS,” said Jacobs.)

Steinberg, a political science professor at Bar-Ilan University, tried to reach out to the Israeli sponsors of the bill, but his appeals have fallen mostly on deaf ears. He said the sponsors were thinking domestically and trying to show their backers they were tough with Israel’s enemies.

So last week, he worked the AIPAC halls. He wouldn’t say with whom he met, but Steinberg made it clear that he believed some of the biggest movers and shakers in the American Jewish community could persuade Israeli right-wing politicians to stand down from provocations.

“I don’t think anyone involved in this legislation had any idea it was going in this direction,” he said.