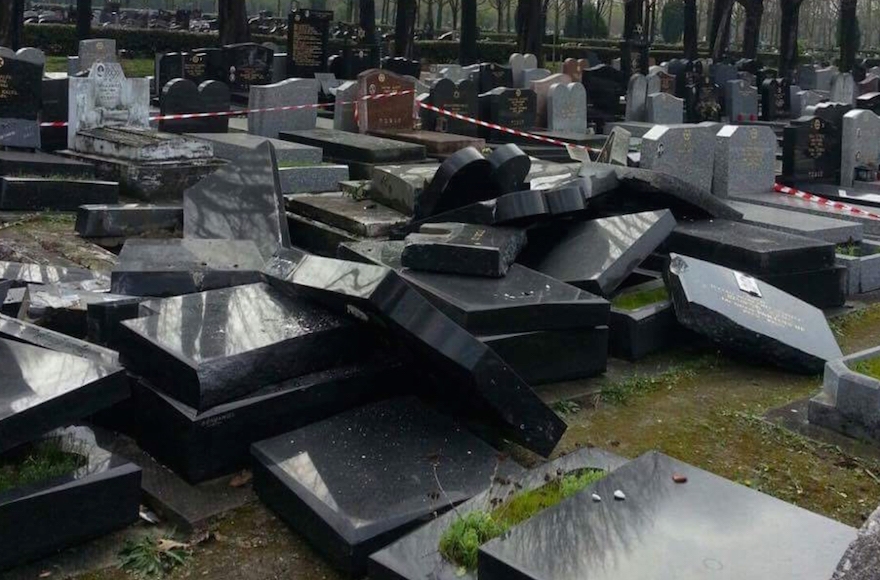 The aftermath of an incident on March 20, 2017 involving a municipal truck at the Jewish section of the Pantin cemetery near Paris. (Courtesy of JSSNews)
Advertisement

(JTA) — Five days after a municipal truck plowed through a Jewish cemetery near Paris in what authorities said was a freak accident, Isabelle Zenou arrived at the scene of the incident with a camera — and a theory.

The March 20 devastation of 13 gravestones in the suburb of Pantin was not an anti-Semitic attack, according to city officials, France’s CRIF umbrella of Jewish communities and even the country’s chief rabbi. The driver drove over 13 headstones after losing control of his vehicle, the chief rabbi said in a statement.

But Zenou, a communications professional from the Paris area, is among many French Jews who are not buying the explanation. She cited delays and alleged time discrepancies in official reports on the incidents, her failure to identify skid marks at the scene and a whirlwind of rumors over the incident.

“I don’t think we’re being told the whole truth,” said Zenou, whose photographs of the damaged stones were published in the Le Figaro newspaper and triggered much speculation about the case online and in the media. Jewish community leaders, meanwhile, accused her and other skeptics of peddling “crackpot conspiracy theories.”

The exact circumstances of the incident in Pantin are the subject of an ongoing police inquiry. Regardless of its findings, though, the incident is already underlining the distrust that many French Jews have in their authorities amid a polarizing presidential campaign, and in a country where many consider wearing a kippah too risky due to hundreds of anti-Semitic attacks recorded in France each year.

Several days after the Pantin incident, the French media reported that unidentified vandals destroyed 40 out of 50 headstones at a small Jewish synagogue near Lyon.

The incident in Lyon, which is undisputedly a deliberate attack, highlighted “the many questions about the incident in Pantin,” said Jonathan Simon-Sellem, a France-born journalist living in Israel. “What is clear is that the Pantin thing exposed a trust crisis between some French Jews, the leaders of their communities and the authorities.”

Initial reports about the incident, including by the La Voix Du Nord local paper, came five days after it happened. The paper and other publications said it took place at night, when the driver steered into the Jewish section of the cemetery to avoid hitting a couple visiting a relative’s grave.

In addition to social network posts by users like Zenou, the reports triggered a wave of rumors and speculation on several well-read French Jewish news sites, including Europe-Israel, JSSNews and the website of the far-right French Jewish Defense League.

The cemetery, the skeptics pointed out, is closed at night, making a collision with visitors unlikely even if the municipal truck was there after hours. In addition, Zenou maintained, “the cemetery paths are too small for a truck to drive on with enough speed to knock over a dozen massive headstones. Nothing adds up.”

Francoise Saadoun, who has four relatives buried in the cemetery, was among the dozens of French Jews who expressed their skepticism of the official version.

“I don’t believe in an accident for one second,” she wrote on Facebook. “The condition of the roads in the cemetery make it impossible.”

The fact that the first reaction by authorities to the incident came nearly a week after it happened did not add to the credibility of officials and community leaders.

“The authorities decided to make a deal to avoid rocking the boat during the elections campaign because news of another anti-Semitic incident will help the far right under Marine Le Pen,” Zenou said. “They covered it up.”

Simon-Sellem said the baseless allegations, which CRIF in a statement recently denied, condemned and labeled “crackpot conspiracy theories,” are unusual among mainstream members of a community that prides itself on its ability to unite under threat.

He pegged the mood to several factors: inconsistencies regarding the incident itself, compounded by a “growing distrust of authorities’ politicization of information on anti-Semitism” and anxiety over the popularity of Le Pen, the far-right presidential candidate, ahead of the elections this month.

Like many American Jews who criticized the Trump administration for being slow to condemn anti-Semitism, French Jews have recently seen a series of events that weakened their own faith in their authorities.

One such event was the March 30 publication of a government report that questioned the existence of a new anti-Semitism in which Jews are targeted over Israel’s actions. It also listed only far-right perpetrators of hate crimes against Jews without mentioning the more politically sensitive violence by Muslims against Jews, which one Jewish watchdog group believes accounts for most assaults.

The hate crime prosecution this year of a prominent Jewish historian who said that Muslims are culturally preconditioned to hate Jews further soured French Jews on the judiciary, although the historian, Georges Benssousan, ultimately was acquitted.

Many Jews also  resented that France’s oldest Jewish organizations, the LICRA human rights group, helped initiate Benssousan’s prosecution. That highlighted a political gap between rank-and-file members of the community and some members of its elite.

“All these factors joined together after the Pantin cemetery incident to open a very divisive debate about basic trust in the midst of the community in a way that didn’t exist in the past,” Simon-Sellem said.

It also prompted a harsh and unusual rebuke of the skeptics by Haim Korsia, the chief rabbi of France.

Korsia, whom many French Jews cherish for his hopeful and consoling speeches at times of crisis, delivered his scathing criticism of the speculation around the Pantin incident in an op-ed published March 29 in the Actualite Juive daily.

Calling the skeptics part of a “campaign of deceit,” the rabbi wrote that he understood their “initial reflex to assume a hateful attack.” But their “persistence in circulating rumors amid an atmosphere of fury, conspiracy theory and revenge,” Korsia added, “help neither our credulity as a community nor to generate support for our causes.”