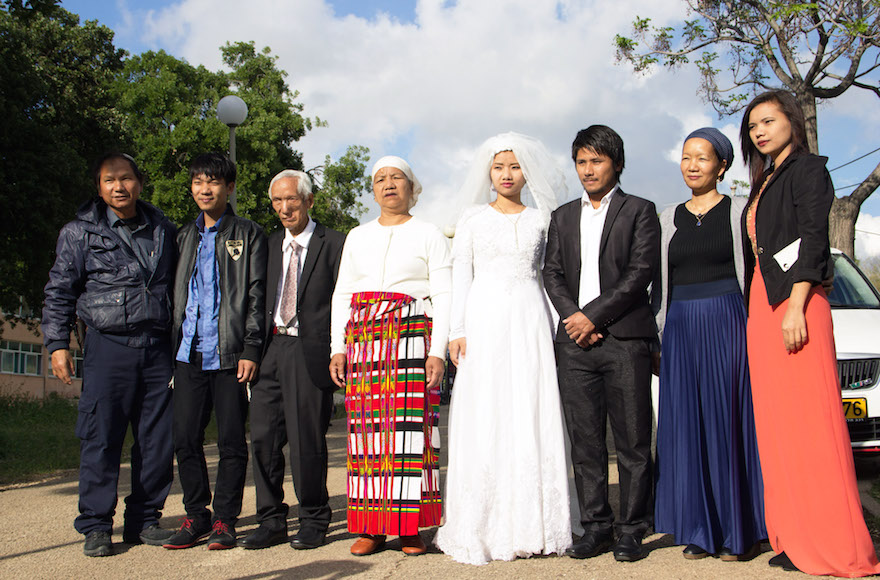 JERUSALEM (JTA) — Ten Indian-Jewish couples from the Bnei Menashe “lost tribe” were married in a Jewish ceremony at an absorption center in northern Israel.

The group wedding remarriage ceremony on Sunday in the Kfar Hasidim community was part of the couples’ formal conversion to Judaism. The couples, who immigrated from India, ranged in age from their 20s to their 70s.

The couples were among 102 new immigrants who emigrated from Mizoram in late February. Their aliyah was facilitated by the Shavei Israel organization, which tries to find lost Jews throughout the world.

“After realizing their dream of making Aliyah and returning to the Jewish people, the 10 Bnei Menashe couples now have an additional reason to celebrate,” Shavei Israel founder and chairman Michael Freund said in a statement. “They have now been remarried in a traditional Jewish wedding ceremony which symbolizes the new lives they are building here in the Jewish state.

The Bnei Menashe are believed to be descended from the biblical tribe of Manasseh, one of the Ten Lost Tribes exiled from the Land of Israel more than 2,700 years ago. In 2005, then-Sephardic Chief Rabbi Shlomo Amar endorsed the Bnei Menashe’s claim to Jewish ancestry, but required them to convert to Orthodox Judaism.

Some 3,000 Bnei Menashe have immigrated to Israel in recent years, with another 7,000 remaining in India.