Don Rickles, insult comedian and actor, is dead at 90 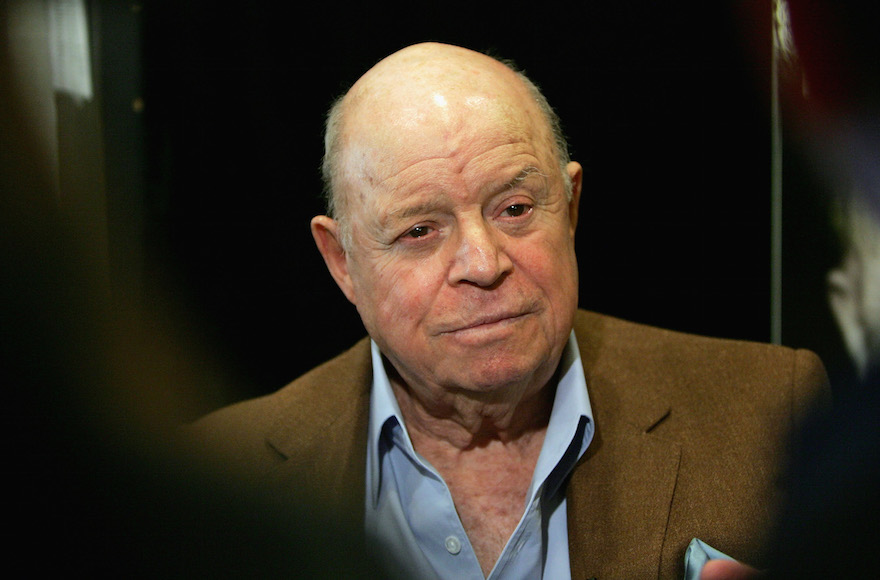 NEW YORK (JTA) — Don Rickles, the bullet-headed comedian and actor whose pioneering brand of insult comedy earned him the nickname “Mr. Warmth,” has died at 90.

Rickles died Thursday morning at his home in Los Angeles from kidney failure, according to his publicist. He would have turned 91 on May 8.

Bald and squat, Rickles would pace the stages of nightclubs and late night talk shows seeking out “victims” in the audience, riffing on their weight, ethnicity and dress, calling them “hockey puck,” but usually pulling back from the edge of causing any real offense by offering a wide smile and an intentionally unctuous declaration of universal fraternity. His targets included fellow comedian Jerry Lewis (“You annoy me”), Frank Sinatra (“Make yourself comfortable, Frank — hit somebody”) and an Asian man sitting in the front row of one of his shows (“There are 40 million Jews here in Los Angeles; how did you get such a good seat?”).

But Rickles also was a serious actor who trained at the famed American Academy of Dramatic Arts, and he had supporting roles in a number of memorable films including  “Kelly’s Heroes,” with Clint Eastwood; “Run Silent, Run Deep,” with Clark Gable and Burt Lancaster, and “Casino,” directed by Martin Scorsese and starring Robert DeNiro.

Younger audiences would recognize his voice as that of Mr. Potato Head in the Pixar film “Toy Story” and its sequels. He appeared in countless television shows.

An auxiliary member of the “Rat Pack,” a loose fraternity of entertainers led by Sinatra, Rickles kept on performing nearly to the end of his life and outlived most of the entertainers of his era.

Rickles was born and raised in Queens, New York. His father, Max, immigrated to the United States as a child from Kaunas, Lithuania. His mother, born in New York, also was the daughter of Jewish immigrants.

Rickles served in the U.S. Navy during World War II, and after his service honed his act at small and often seedy nightclubs.

“I had a tough time – I had no other jobs – so I reached out to comedy,” he said in an interview with the Jewish Standard of New Jersey in 2013. Sinatra spotted Rickles at a Miami club, and the famed singer helped make him a headliner in Las Vegas. Rickles first appeared on “The Tonight Show Starring Johnny Carson” in 1965, and would return as a guest at least 100 times.

In 2012, Jon Stewart presented Rickles with the “Johnny Carson Award For Comedic Excellence” at the Comedy Awards run by the Comedy Central cable network.

In his 2007 memoir, “Rickles’ Book,” he recalled a visit to his father’s grave on Long Island along with the cantor who would perform his wedding to Barbara Sklar.

“The cantor put on his white robe and prayer shawl,” Rickles recalled. “In the still of the morning, standing over my dear father’s grave, he sang the Hebrew prayer for the dead. He wailed; he sang with such tender feeling and heartfelt anguish that I felt the presence of God Almighty in every fiber of my being. Afterward, we recited the Kaddish, the Jewish mourners’ prayer, our words melting the morning fog to tears.

“Before we left, the cantor sang a prayer in Hebrew, inviting Dad to my wedding. Then he finished by saying, ‘May your soul be with us forever.’”

Barbara Rickles survives her husband, as does their daughter, Mindy. Their son, Larry, an Emmy Award-winning producer, died at 41 in 2011 of respiratory failure.

Rickles often tried to distinguish between the “character” he played on stage and his real-life persona.

“I don’t care if the average guy on the street really knows what I’m like, as long as he knows I’m not really a mean, vicious guy,” he said. “My friends and family know what I’m really like. That’s what’s important.”