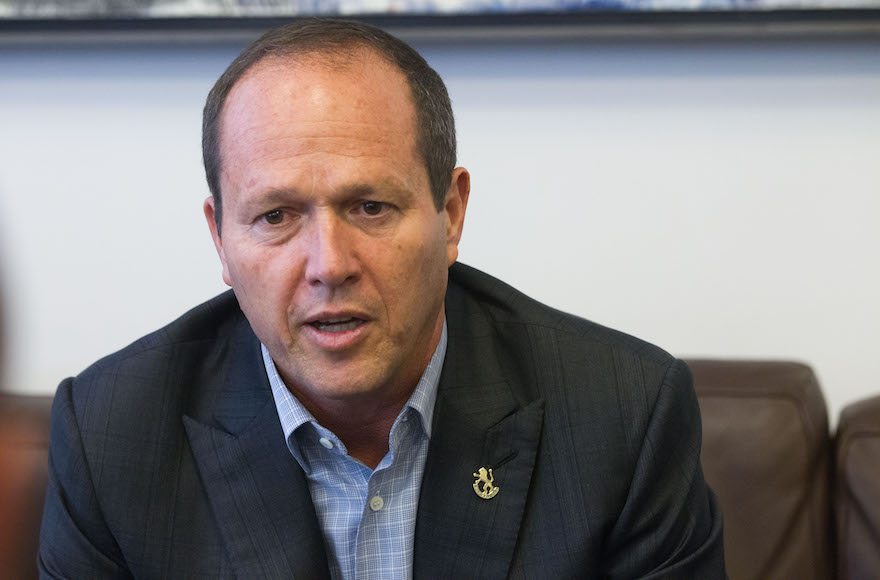 JERUSALEM (JTA) — Jerusalem Mayor Nir Barkat canceled a lecture he was to deliver at San Francisco State University, saying organizers hadn’t done enough to publicize an event meant to provide “healing” after his address at the school one year ago was drowned out by pro-Palestinian demonstrators.

In a statement Wednesday announcing his decision to cancel the lecture for the following day, Barkat noted that in April 2016, “dozens of anti-Israel protesters disrupted my public lecture through intimidation and provocation, vulgarities and incitement that bordered on the anti-Semitic.”

He noted that the university’s president, Leslie Wong, invited him back to the university in order to “provide students the opportunity to learn that they were denied last spring.”

Barkat said that by offering a “ticketed, limited event,” the university “did not offer the lecture that would provide the kind of healing needed after the assault on free speech last year.” He also said that “no legitimate effort was made on the part of the University to publicize the lecture.”

“By failing to provide the necessary public forum and properly publicize my lecture, the University has contributed to the continuing marginalization and demonization of the Jewish state,” he said in the statement, “If I were a representative of any other country, no institution of higher learning would have allowed my speech to be drowned out by protesters inciting violence and then bring me back to campus in a limited, secluded way.”

But Wong said the mayor’s office gave the administration too little notice to prepare for the latest event. He said Barkat’s staff notified Wong on March 29 of his plans to speak a week later.

“Our plan was not perfect, but it was the best we could do given the time available to prepare and our need to prioritize the well-being of all our guests,” Wong said in an email to the campus community Wednesday, the San Francisco Examiner reported.

“Given the short notice of his visit, we quickly put together a plan that prioritized the safety of the mayor and our community while facilitating respectful dialogue,” Wong said. He wrote that there were more than 100 confirmed participants.

Some 25 Jewish students signed an open letter to Wong calling the invitation to Barkat “a reckless political stunt,” according to J. The Jewish News of Northern California. The students criticized the administration for failing to publicize the event on  university event calendars, web pages or social media, and for scheduling it during Islamic Awareness Week on campus.

Meanwhile, activists calling themselves Bay4Palestine released a statement titled “Get Ethnic Cleanser Nir Barkat Out of SFSU.” The statement blasted Wong for extending the invitation to “a person who symbolizes Zionist settler colonialism,” J. reported.

Five minutes into Barkat’s speech last year sponsored by the university’s Hillel, more than a dozen protesters affiliated with the campus group General Union of Palestinian Students’ shouted into megaphones such chants as “from the river to the sea, Palestine will be free” and “intifada,” or uprising. The demonstrators, who wore traditional Arab headdresses and waved Palestinian flags, also demanded that Barkat be removed from the university.

Campus police and security called to the lecture hall reportedly protected the mayor but did not stop the protesters. Some Jewish students later reported not feeling safe during the demonstration.

Barkat reportedly continued speaking and, when he could not be heard, walked into the audience to answer questions.

An investigation into the incident found that the university did not have the proper protocol in place to handle a protest against the mayor of Jerusalem.

“Ensuring the campus is a safe environment for all students is my top priority for the coming year,” Wong wrote at the time. “We failed our students — both the event attendees and the protesters — through multiple inactions.”

I have decided to cancel my lecture tomorrow at San Francisco State University. pic.twitter.com/JNlMPFYGpY