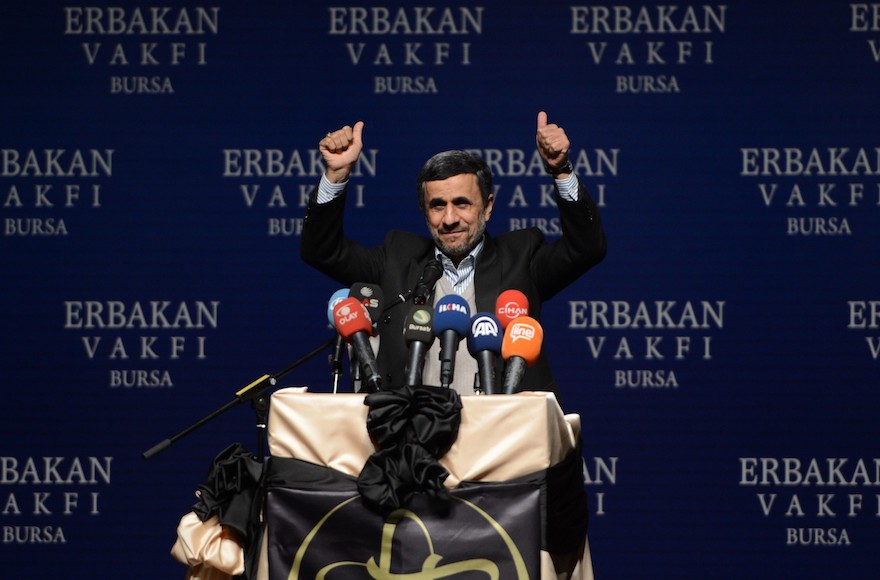 (JTA) — Mahmoud Ahmadinejad filed to run in Iran’s upcoming presidential election, defying the wishes of the country’s supreme leader that he not seek to return to the office.

Following Supreme Leader Ayatollah Ali Khamenei’s recommendation in December that Ahmadinejad stay out of the race, moderate President Hassan Rouhani was seen to have a wide-open path to reelection. Ahmadinejad unexpected move could challenge that perception.

Ahmadinejad previously said he would not run and would support his former Deputy Hamid Baghaei, who also registered on Wednesday. At a press conference shortly after registering, Ahmadinejad called Khamenei’s comments “just advice,” and described his move as helping Baghaei.

“His advice does not prevent me from running,” he said. “There is extensive pressure on me from dear people of different walks of life as their small servant to come to the election.”

Ahmadinejad, who under Iranian law became eligible to run again after four years out of office, remains a divisive figure. Massive protests spurred by his disputed 2009 election were violently suppressed, with thousands of people detained and dozens killed. Two of his former vice presidents have been jailed for corruption since he left office.

During Ahmadinejad’s administration, Iran faced heavy international sanctions against for its nuclear program, which Western countries said aimed to develop weapons. Iran has claimed the program is for peaceful purposes.

Rouhani, who has yet to formally register to run for reelection, signed an agreement with world powers to limit Iran’s uranium enrichment in exchange for sanctions relief. Registration remains open until Saturday. Iran’s Guardian Council of clerics and jurists vets all applicants and will announce an approved list of candidates by April 27.