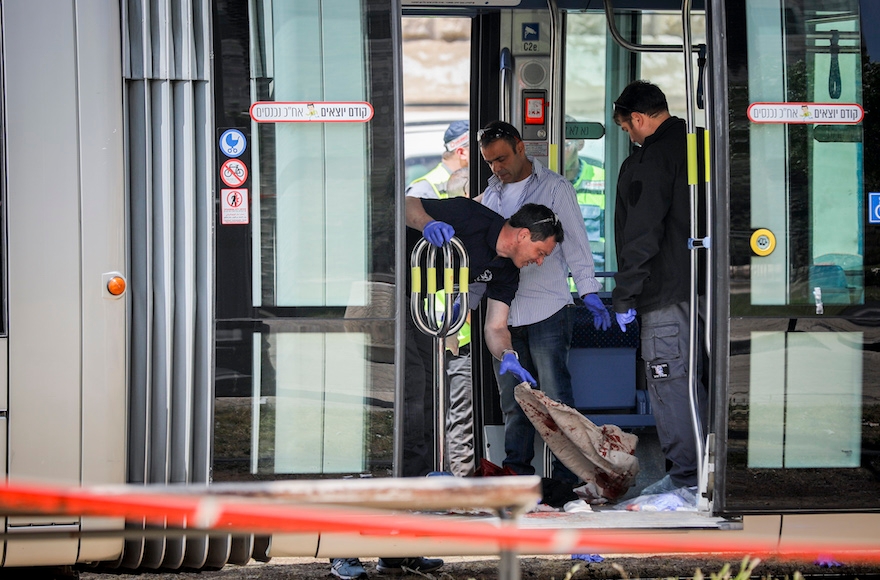 Police at the scene where a young British woman was killed in a stabbing attack on Jerusalem’s light rail near IDF square in Jerusalem, April 14, 2017. (Yonatan Sindel/Flash90)
Advertisement

(JTA) — A British woman in her 20s studying in Israel was stabbed to death in Jerusalem allegedly by a Palestinian.

The woman, named by Israel’s envoy to the United Kingdom as Hannah Bladon, died following the Friday attack. She had been taken to the hospital in critical condition after suffering multiple stab wounds aboard the city’s light rail, Israel Radio reported. Police said she was attacked by a 57-year-old man from eastern Jerusalem’s Ras al Amud neighborhood.

Yoram Halevi, commander of the Jerusalem District of the Israel Police, told the radio station that the suspect is mentally ill and has a criminal record for domestic violence. He was apprehended at the scene.

“We know he recently tried to commit suicide,” Halevi said.

Israel’s envoy to the U.K., Mark Regev, condemned the attack on Twitter.

“My thoughts are with the family and friends of UK student Hannah Bladon, who was murdered in a senseless act of terror in Jerusalem today,” he wrote.

My thoughts are with the family and friends of UK student Hannah Bladon, who was murdered in a senseless act of terror in Jerusalem today.

Following the attack, police increased security in and around the light rail, police spokesman Micky Rosenfeld wrote on Twitter.

The victim is a citizen of the United Kingdom studying in Israel, according to The Jerusalem Post.

The number of recorded terrorist attacks by Palestinians on Israelis increased last month by 15 percent from the previous month to 119 incidents, the Israel Security Agency, or Shin Bet, said in its monthly report published earlier this week. No one was killed; six were injured.

The 20 attacks recorded in Jerusalem in March constitute a 30 percent increase over the 14 there in February.