Larry David is upset that his hard work made Steve Bannon rich — but did it? 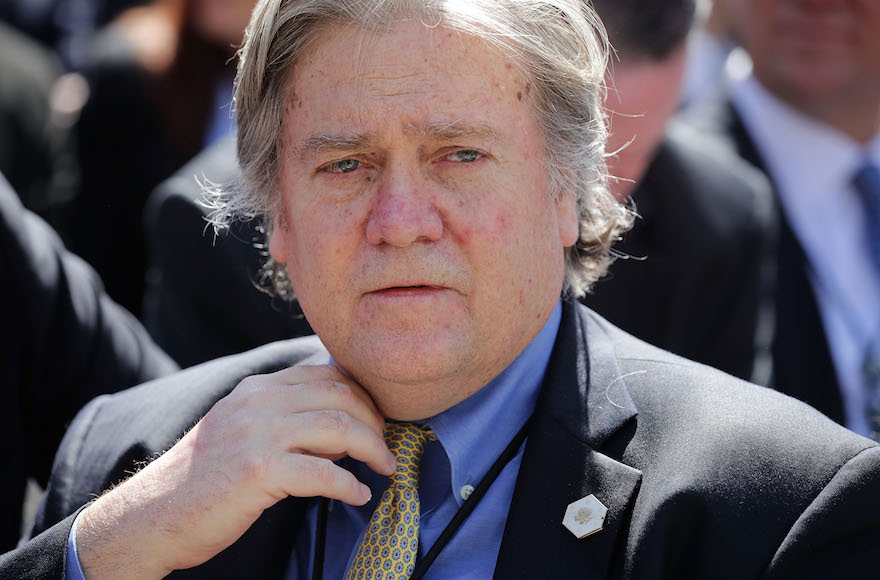 We already know lots about Bannon: He helmed Breitbart News before he joined Trump’s campaign last year, and he called the outlet a platform for the “alt-right,” the loose assemblage of hypernationalists that includes white supremacists and anti-Semites, but also fierce defenders of Israel and Jews. Bannon launched Breitbart Jerusalem as a means of correcting what he perceived as anti-Israel media bias.

A former wife accused him of anti-Semitism; he has denied it. He was in the U.S. Navy, a Goldman Sachs banker, then a Hollywood broker, and then a producer of conservative documentaries.

Exploring his Hollywood years, Bruck details a litany of deals gone wrong. There are plenty of nuggets in the piece of Jewish interest. Here are four:

Larry David doesn’t like the ‘Seinfeld’ story – but is it all a George Costanza-style con by Bannon?

Bruck addressed one of the most media-beloved elements of Bannon’s rise: that he made a fortune off of negotiating a syndication deal for “Seinfeld.” In 1992, Bruck reports, Westinghouse hired Bannon’s private-equity fund to sell its small stake in Castle Rock Entertainment, the TV production company that owned the “Seinfeld” reruns. An assessment last year in Forbes said that if Bannon had a one percent stake in syndication, he would have made upwards of $30 million.

Larry David, the co-creator of the comedy starring his friend, Jerry Seinfeld, and the model for Seinfeld’s neurotic buddy George, was unhappy with the association.

“I don’t think I ever heard of him until he surfaced with the Trump campaign and I had no idea that he was profiting from the work of industrious Jews!” he told Bruck. Rob Reiner, who helped found Castle Rock,  was “sick” because of the association.But is Bannon really making money off the show? In a 2015 interview with Bloomberg Businessweek, Bannon said he made five times as much as he expected on the deal involving Westinghouse’s sale of its stake in the show. He claimed to have deferred part of his fee for an ownership stake. He did not say what his stake was.

But here’s the thing: It’s not clear what Bannon’s stake – if any – was. Payouts to Bannon do not appear in available records, Bruck reported, although she noted that the first months of syndication are not available, and he might have been capped and paid out before records were available.

In April, 1997, he submitted an “income and expense declaration,” indicating that his annual salary was roughly five hundred thousand dollars, and that his total assets were around $1.1 million. Any profit participations from “Seinfeld” should have shown up at that time. Either they were not substantial or Bannon failed to disclose them in a sworn statement.

(In 2005 papers related to the divorce Bruck also uncovered this: “He left blank the space for his salary, and reported $967,465 in stocks, bonds, and other assets, and $41,401,067 in other property. The figure is inexplicable, and inconsistent with his other publicly available filings.”)

Why would Bannon boast about a deal that does not appear to have brought him much in the way of return? It’s not the only such anomaly Bruck uncovered. Bannon recently claimed in an interview with the Washington Post to have driven up the price Seagram — then headed by Edgar Bronfman Jr. — paid for PolyGram by bringing in a Saudi prince as a bidder. He said he got “a big fee” for his efforts. But folks involved in the deal told Bruck they could not recall Bannon’s involvement in the deal or any bid from a Saudi prince.

Bruck found a telling line in one of Bannon’s first documentaries cast in a conservative slant, “In the Face of Evil.” The movie, which chronicles the rise of President Ronald Reagan, acknowledges that Reagan as an actor was never a major Hollywood draw. Why? Because Jewish executives made it so. But wait: It’s not like Bannon is blaming these powerful Jews. It’s more like he’s admiring them.

We’ve noted before how Trump, during his campaign, repeatedly trashed Goldman Sachs bankers, and then proceeded to hire some of their top alumni for senior advisory positions.

Bannon also shares an animus toward Goldman Sachs, but is himself an alumnus. Bruck found a rare – perhaps the only – instance of someone asking him to explain the anomaly:

In October, 2010, he appeared on “Political Vindication,” a right-wing radio show in Los Angeles. One of the hosts said that Bannon had been “evil” while he worked at Goldman Sachs. He replied equably, saying, “It was a private partnership then, and a firm of the highest ethical standards,” but it had changed when it went public. He did not mention that since it went public, in 1999, he had made every effort to do business with Goldman.

Bannon’s ex-wife has said in post-divorce papers that Bannon objected to certain schools for their twin girls because he didn’t want them consorting with Jewish students. “He said he doesn’t like Jews and that he doesn’t like the way they raise their kids to be ‘whiny brats,’” Mary Louise Piccard said in a 2007 filing, referring to The Archer School for Girls.

She also reported that he asked another school director, at the Westland School, why there were “so many Hanukkah books in the library.”

Bannon has vigorously denied the claims. New York Magazine, in November, confirmed the “Hannukah books” incident with the Westland director, but she told the magazine she understood Bannon simply to be curious because the school was secular, and she did not detect an animus toward Jews.

Bruck uncovered an email between Piccard and Bannon in which she directly raises with him his alleged objection to the percentage of Jewish girls at Archer.

“As for the % of Jewish girls at Archer I have no idea what it is nor do I understand why that is such a concern for you,” she wrote in 2007. “I certainly have not been raising the girls to be prejudice[d] against Jews or anyone else for that matter.”

Bannon’s spokesperson told the New Yorker that he was not an anti-Semite, and noted that he paid the girls’ tuition at Archer.