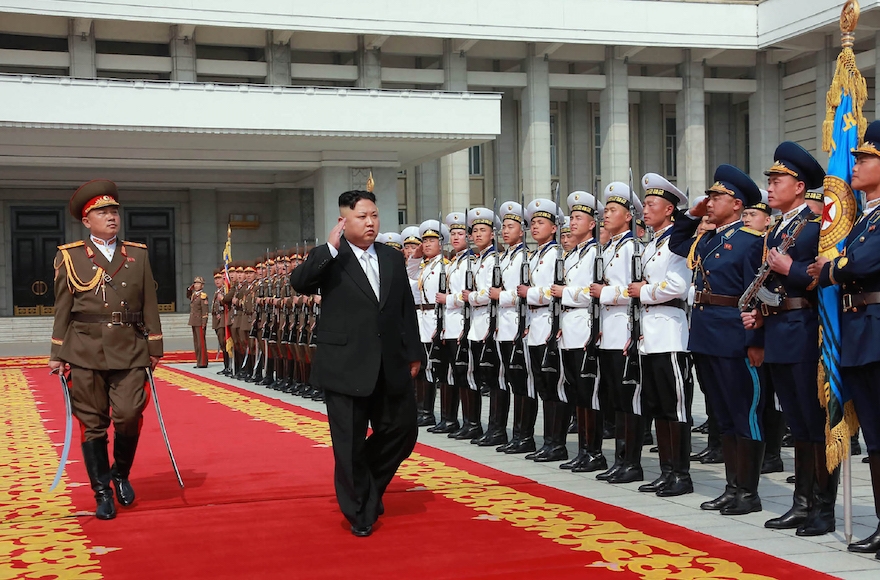 “An unchecked Iran has the potential to travel the same path as North Korea, and take the world along with it,” Secretary of State Rex Tillerson said Thursday at a press availability. He was explaining why President Donald Trump had ordered a review of the Iran nuclear deal reached by his predecessor, Barack Obama.

“The United States is keen to avoid a second piece of evidence that strategic patience is a failed approach,” Tillerson said.

“Strategic patience” is a rubbery term that critics have applied loosely to presidents – Republican and Democratic – who do not strike back swiftly at evidence of nascent rogue weapons-of-mass-destruction programs, instead preferring diplomatic and economic pressure.

It has been applied to North Korea and the policy first instituted by the Clinton administration in 1994, when it signed the Agreed Framework with that country, but also to how President George W. Bush attempted to renegotiate a North Korea deal in the mid-2000s, and to the chemical weapons removal pact Obama negotiated with Russia and Syria in 2013.

The North Korea framework collapsed in the early 2000s, during the Bush administration, and in 2006, North Korea tested a nuclear device. Syria’s apparent use of sarin gas in an attack earlier this month that killed 89 civilians in rebel-held territory suggested that the 2013 removal of chemical weapons was not fully implemented.

Tillerson’s implication: Without a thorough review of the nuclear deal, Iran could also one day surprise the world with a nuclear test.

Is he right? It’s obviously too soon to say. But here are some ways the Iran deal is similar to its failed North Korea predecessor – and ways it is different.

In both the North Korea and Iran cases, some sanctions relief was up front – critics say that was a recipe for failure. With North Korea, the United States agreed to deliver 500,000 tons of oil to the cash-starved nation. (There were other goodies, but these were attached to progress in the dismantling of its nuclear capacity.)

In the Iran deal, the U.S. agreed to unfreeze American-based Iranian assets held since the 1978 revolution, amounting to $400 million, and to lift secondary sanctions targeting businesses in other countries that deal with Iran. (Bans on U.S. business with Iran mostly remain in place.)

It’s not clear yet what benefit Iran accrues from the lifting of the secondary sanctions – estimates vary wildly between $40 billion and $150 billion.

In addition, non-nuclear sanctions – relating to Iran’s backing for terrorism and its human rights abuses – remain in place.

“Tillerson is reflecting concerns that the Iran deal has many of the same inherent flaws as the Agreed Framework and may end up in the same scenario,” said Mark Dubowitz, the executive director of the Foundation for Defense of Democracies, the preeminent think tank opposing the Iran deal.

Daryl Kimball, the executive director of the Arms Control Association, which backed the Iran deal, said that unlike in the North Korea deal, the Iran agreement has “snap-back” provisions that allow the United States to reimpose the sanctions should Iran ever be in violation.

The North Korea deal required the dismantling of three nuclear reactors, one completed and two under construction.

The Iran pact requires 24/7 access to known enrichment facilities and allows inspectors to demand access – albeit with a waiting period of 24 days – at any other facility they suspect of nuclear weapons activity. Tillerson on the day he announced the review of the deal also affirmed that Iran was in compliance.

The North Korea agreement referred only in vague terms to inspections beyond the three facilities and did not explicitly count out weapons-enriched uranium, although its ban was certainly implied in the endgame — a nuclear-free Korean peninsula. (The reactors that were shut down enriched plutonium.) The North Koreans fiercely resisted inspections beyond the three facilities.

The difficulty is not in detecting whether a nation is violating the agreement – intelligence agencies and satellite surveillance have been proficient at tracking down violations. It was North Korea’s attempt to secretly enrich uranium in the early 2000s that precipitated the collapse of the deal, and the Obama administration exposed the existence of a secret uranium enrichment plant in Fordow, Iran, in 2009 based on intelligence reports.

Instead, problems could occur in attempts to inspect sites where inspectors do not have easy access.

Dubowitz said the provision allowing inspectors to demand access to suspected sites may be unenforceable: Hard-liners in the Iranian leadership have said repeatedly that access to military sites would be a no-go.

“It’s the covert sites that are the big problem,” he said. “If you’re not getting into the military sites, the deal is deeply flawed.”

Heather Hurlburt, the director of New Models of Policy Change at New America, a think tank that backed the Iran deal, said the inspections regime is much more intrusive in the Iranian case.

Iran is a diverse nation with an ancient tradition of multilateral ties with its neighbors. North Korea is a secretive Stalinist regime and has just one significant relationship – with China.

Kimball said the world powers that negotiated the Iran deal granted Iran considerable leverage: Iran does not have the self-contained system that allows Kim Jong-un, North Korea’s leader, to retain power even as his people starve. In order to survive, he suggested, the regime must allow Iranians to trade and thrive.

“The Iranians highly, highly value the removal of nuclear sanctions and access to oil markets,” Kimball said. “There was no similar incentive for North Koreans.”

Iranians “deeply fear” losing access to the outside world, he said.

“As time goes on they will be more accustomed to this liberal environment of trade and investment,” Kimball said, “and that will make it more appealing to them to continue to comply.”

Dubowitz said it was Iran’s ambitions in the region that made it more dangerous, adding that Kim was unlikely to strike unless he felt his regime was threatened. The Iranians, Dubowitz argued, could one day use nuclear leverage to support their expansionist claims in the Middle East, including in Syria, where they are backing the Assad regime in quelling the rebellion, in Yemen, in the Persian Gulf – and against Israel.

“North Korea is an isolationist pariah nation with a Stalinist ideology that appeals to no one,” he said. “Iran sees itself as guardian of the Islamic world.”

The goal of the Framework Agreement was a “nuclear-free Korean peninsula” – no nukes, period. North Korea was to be allowed to get light-water reactors, which are proliferation resistant.

Iran, beginning eight years after the 2015 agreement, will be allowed in increments to reactivate centrifuges that could conceivably enrich uranium to weapons grade.

That has been a key concern of critics of the Iran deal, known officially as the Joint Comprehensive Plan of Action.

“The JCPOA fails to achieve the objective of a non-nuclear Iran,” Tillerson said in his press availability. “It only delays their goal of becoming a nuclear state.” 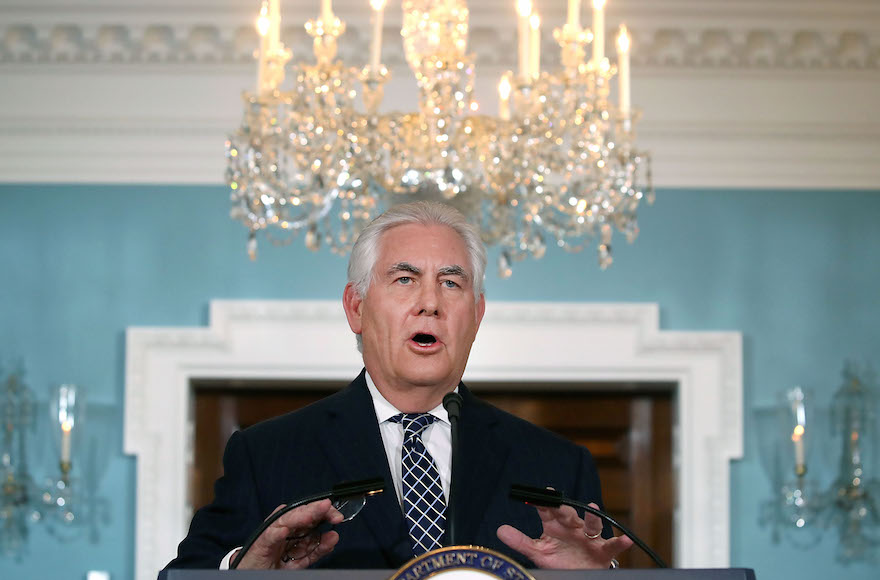 Kimball sounded exasperated at what has become a common misperception.

“The deal obliges Iran to never pursue nuclear weapons in the future,” he said.

While it is true that the agreement allows Iran to enhance its enrichment capabilities over time, and decreases the breadth of the inspections regime, Iran remains a signatory to the Nuclear Non-Proliferation Treaty. As part of the deal, it signed on again to the “additional protocol” that allows International Atomic Energy Agency inspectors expanded access to sites in perpetuity. (Iran had previously shucked off the additional protocol.) The protocol has no sunset clauses.

Why can’t we be friends?

It wasn’t just bad actions by North Korea that killed the deal – it was bad faith and distrust on all sides. President Bill Clinton signed the deal in 1994, but by the time of implementation, an adversarial Republican Congress was in place and frustrated the deliveries of promised heating oil.

In both the North Korea and the Iran cases, missile development has been an obstructing factor. Neither deal touched ballistic missiles, but testing the devices, capable of delivering a nuclear weapon, has exacerbated tensions.

The United States in the late 1990s began to sanction North Korea for its ballistic missile tests, but North Korea defiantly kept testing them and said the sanctions were eroding the framework agreement.

A similar scenario is playing out now. The Obama administration last year and the Trump administration this year issued new sanctions following Iranian missile tests; Iran has said it sees the sanctions as undermining the agreement.

Trump made clear he sees the missile tests as the problem, saying this week of Iran that “they are not living up to the spirit of the agreement.”