Donald Trump visited Israel in the 1980s. Me too! 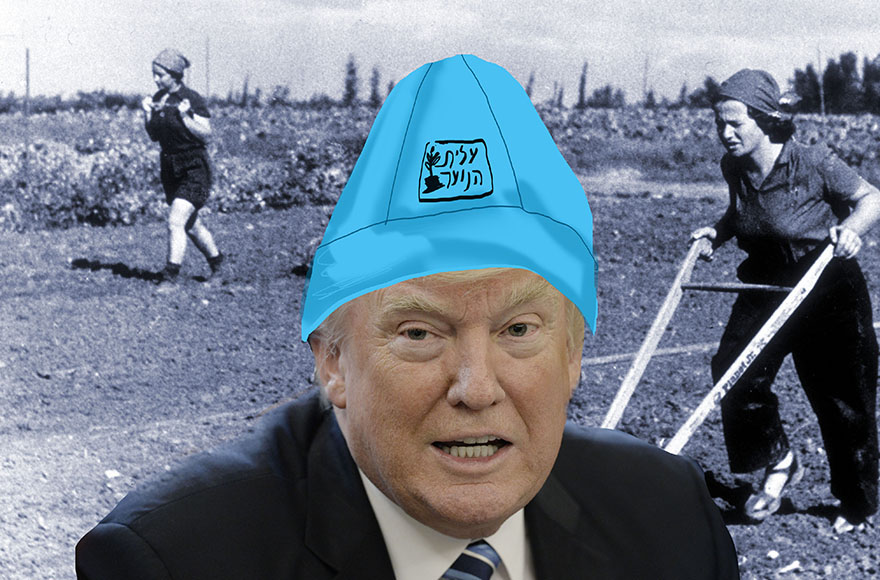 NEW YORK (JTA) — I never thought I had much in common with Donald Trump, until I learned this week that we both visited Israel for the first time in the 1980s.

Haaretz reports on the “Trump file” kept in the Israeli state archives, detailing the real estate tycoon’s brief visit to the country in 1989.

I first visited Israel a few years earlier, right out of college.

Trump was apparently there to explore investment opportunities, including a possible casino in the southern resort town of Eilat.

I was there to discover my ancestral connection to the land, pursue what Ahad Ha’am called our people’s “inner freedom to cultivate its abilities along the beaten path of its history,” and put off having to look for a job.

Of course, Trump got the red carpet treatment, at a time when the Israeli government only owned one red carpet and it had to be checked out of the Knesset equipment closet when bigwigs visited. The Trump file also suggests that upscale hotels competed for the opportunity to host the billionaire, the way world leaders compete today for a chance to stay in Trump’s D.C. hotel.

My reception, shall we say, was a little more modest than Trump’s. Let’s compare Trump’s visit, as detailed by Haaretz, and my own:

I arrived in Israel in June, 1983 after a 17-hour flight in coach wedged between a Hasidic diamond dealer from Monsey and a Texas evangelist named Duke.

A taxi driver, probably a felon, met me outside the airport and offered to take me to Tel Aviv for roughly the same fare I paid for the flight from JFK.

The next morning Trump had breakfast with Beilin and Teddy Kollek, the mayor of Jerusalem. They then went on a tour of Jerusalem’s Old City, several museums and Bethlehem.

The next morning I wandered the back alleys of Tel Aviv, looking for the offices of the Kibbutz Aliyah department, which had promised to assign me to a kibbutz for a month of volunteer duty. After asking roughly 47 Israelis for help, and heeding  their directions to walk “yashar, yashar,” I arrived back where I started from.

After lunch Trump flew to the Dead Sea, accompanied by Peres, where the billionaire was presented with a development project.

After lunch I finally found the Kibbutz Aliyah office, where I was presented with a sign saying, “On break — will return late afternoon.”

He then flew to an area in the northern Negev desert that had been constructed for people who had been evacuated seven years earlier from the Israeli settlement of Yamit in Sinai.

I then walked to Tel Aviv’s old Central Bus Station, which had been constructed for people who thought that a “bus station” is a 20-square-block flea market with an occasional bus stop thrown in.

Trump also visited a moshav and a kibbutz and asked to see a playground he had donated to the Jewish National Fund.

Trump then traveled to Mitzpe Ramon in the Negev desert and visited the Ramon military base.

I then traveled to Ramle in central Israel where I was to meet a driver from the nearby kibbutz. Most of my fellow passengers were Israeli soldiers in full gear, which made me painfully aware of my pale legs, soft hands, brand-new “Nimrod” sandals and my expensive L.L. Bean sun hat.

Trump finished the day in Eilat, where he watched the sunset and dined at the Neptune Hotel, followed by a nighttime tour of the Red Sea resort town.

I finished the day at the kibbutz, where I watched the beautiful Danish volunteers flirt with the Israeli soldiers, and dined on a strange breaded thing called “shnitzel,” followed by a nighttime stint washing pots and pans in the communal kitchen.

According to plan, Trump started his second day with a dive at the coral reef reserve in Eilat.

Not at all according to plan, I was awakened before dawn, driven out to the fields on a trailer towed by a wheezing tractor, and dropped at the head of a row of grapevines which I had to weed for the next six hours.

He then attended to business, visiting several potential sites for investment — including an airport — and examined opportunities for investing in Tel Aviv and Herzliya.

I then attended to the blisters on my hands, and the third-degree sunburn I got on my neck and shoulders despite wearing my expensive and clearly useless L.L. Bean hat.

After meeting with then-Prime Minister Yitzhak Shamir, Trump returned to the U.S. by the end of the day.

After meeting with the head of the kibbutz work detail, who compared my weeding unfavorably to the kibbutz mascot — a beagle named “Tzimtzum” — I returned to the volunteers’ quarters where I wrote a letter to my parents gushing how inspiring Israel is and how I didn’t regret for a minute not getting a job or going to graduate school.

Although inheriting a family business might have been nice.