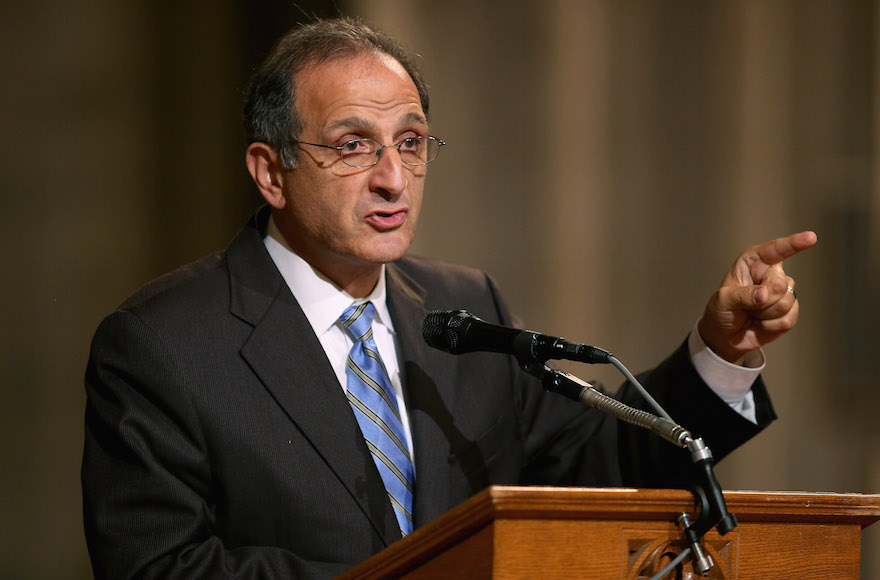 The most recent report of the U.S. Commission on International Religious Freedom has zero words on access – or on anything to do with Israel.

There is one obvious reason for the discrepancy: The Commission on International Religious Freedom, a government-funded body and ostensibly independent, focuses on a limited number of countries or groupings of special interest, while the State Department covers every country.

But in a rare dissent, the vice chairman of the commission, James Zogby, suggested another reason: Israel is the third rail, and a body that was founded precisely to keep the government honest on matters of religious freedom is afraid to touch it.

In turn, at least one former commissioner has said that Zogby, who is also president of the Arab American Institute and a longtime advocate for Palestinian rights, was obsessed with the Palestinian issue. (The commissioners all volunteer their time.)

The issue arose this week as the commission’s chairman, Thomas Reese,  published its annual report.

In a conference call Wednesday, Reese noted the bipartisanship that led the nine-member commission to name “countries of particular concern,” or CPCs, where religious freedoms are violently suppressed, including China, Iran, Burma and Saudi Arabia, among others.

But in a news conference held shortly after, Zogby objected that Israel had been ignored.

Zogby, an Obama appointee who is ending a four-year term in May, published a five-page dissent on an array of issues – chief among them, the commission’s failure to take on Israel issues.

He cited a November letter to the commission from a range of Christian groups and leaders, some based in Jerusalem and the West Bank. They charged Israel with “deeply disturbing discriminatory laws that impact the freedom to marry, family unification, discrimination in housing and land-ownership, the freedom of movement, and the right to worship at and to maintain holy sites.”

“I am including this matter in my dissent, not only because consideration of both letters was rejected by a slim majority of Commissioners, but because it was clear from the way the debate took place that there could be no rational discussion of this issue,” Zogby wrote.

Other commissioners reacted with such “vehemence” to criticism of Israel, wrote Zogby, that his appeals were dismissed.

“We were, in effect, bullied into silence,” he wrote.

In his conference call, Reese suggested that the commission – with five Democrats and four Republicans – could only productively address issues that were not subject to deep partisan differences.

“The issue of Israel and Palestine is a controversial issue around the world and also in the United States, so it’s not surprising there would be some controversy and disagreements within our commission on these issues,” the chairman said in reply to a JTA query on the call.

Reese said the letters about Israel were “discussed by the commission and a majority of the commissioners did not vote to move forward on it, so I think it’s important to point out that our report has bipartisan consensus on the countries that we do cover.”

He did not elaborate on why the Israel issue would defy “bipartisan consensus,” but Democrats have been more likely in recent years to accommodate criticism of Israel in their forums. Republicans tend to see the country as a bulwark of Western values.

The commission’s bailiwick extends beyond the worst offenders and includes critiques of parts of the world where suppression of religious freedom has not reached the CPC level. A chapter in the most recent report noted restrictions on halal and kosher slaughter in Western Europe, for example.

Hiddush in its letter to the commission said it was not seeking CPC status for Israel; it only wants the commission to look into the Israel issue as a means of spurring the country to make changes.

“We fortunately do not deal with issues of arrest, murder, or deportation in conjunction with the realities of religious freedom and equality,” Hiddush said in its letter. Instead, the group said, it was seeking the commission’s help to “raise awareness and strengthen the civil society organizations, such as Hiddush, who labor to strengthen religious freedom on the ground in Israel.”

Congress created the Commission on International Religious Freedom in 1998 in part as a means of keeping the executive branch honest. Should the State Department seek to downplay a putative ally’s religious oppression, it was thought, the commission was there to keep things real.

It’s not the first time, however, that the commission has been seen as politicized. When Republicans held the majority, the commission was accused of focusing intently on persecution of Christians abroad and letting pass reports of Muslim suffering.

Zogby said the failure to hold Israel to standards applied to other countries where occupiers are seen as repressing religious freedoms – Turkey in Cyprus or Russia in Crimea – undercuts its broader mission.

“The charge that USCIRF has a double standard particularly undermines our ability to effectively advocate for religious freedom in Arab countries,” he said in his dissent.

Zogby would not name the commissioners with whom he has clashed. JTA put in a query to a Republican commissioner, Clifford May, the president of the Foundation for Defense of Democracies, who has sparred with Zogby in other forums, but has yet to hear back from him.

A former commissioner, Elliott Abrams, a veteran of the Reagan and George W. Bush administrations, whose term overlapped with Zogby’s, this week told Al Monitor, the Middle East news site, that Zogby’s sole mission was to have a go at Israel.

“Jim Zogby has had one single goal in all of his criticism of the commission and all his activities when on the commission, and that is to attack Israel,” he said.

Zogby rolled his eyes at the accusation when it arose during the news conference. He said Abrams seemed to forget the many occasions when they worked together to address religious freedom restrictions in other countries.

“We worked on a number of issues,” he said.

Israel and pro-Israel groups regard a few of the Christian groups that signed the complaint letter as implacably hostile to Israel, among them Sabeel, a Palestinian liberation theology group that sees a single binational state as an “ideal and best” goal, but which currently embraces a two-state solution. A number of other signatories are local Christian service groups, including clubs and charitable groups.

Judaism’s Reform and Conservative movements declined to back Zogby’s dissent, although they have been at the forefront of U.S. advocacy for religious freedoms for the non-Orthodox in Israel.

A Conservative movement official told JTA that the movement does not seek the intervention of any foreign government or agency on these issues, as matters of religious pluralism are internal matters of the world Jewish community and the Jewish state. Reform movement officials declined to comment.