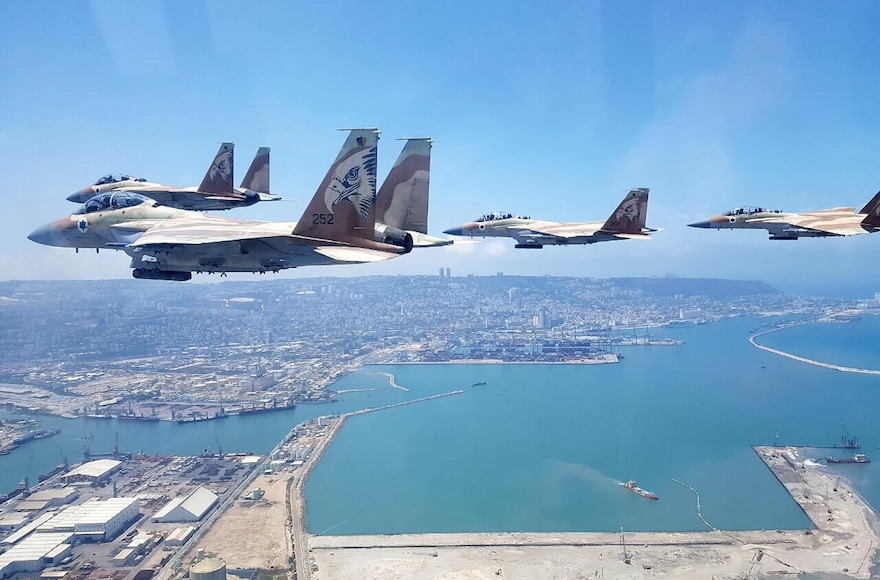 But the pilots in the cockpits arguably saw the better show. Cruising at low altitude, they were treated to stunning views of Israel celebrating its 69th birthday at barbecues and beach parties held across the country, from the Negev to the Galilee.

“It was very, very exciting to see these places so close up,” said Lt. R, who piloted an F-15 in the flyover and could only be identified by his first initial because of Air Force security rules. “Our friends and family were waving at us, and we were looking for them.”

R’s fighter jet was one several outfitted with cameras for the event. The footage offers close-ups of the squadrons in action and expansive shots of Israel’s cities, coastline and farmland.

“When I flew over my hometown in the south, I knew where my family was, and they knew how to spot me,” Lt. R said. “My dad always wanted to be a pilot, and he taught me to have the same dream ever since I was a little boy.”

The main flyover included a few dozen fighter jets, helicopters, transport planes and trainers. Starting in the south, the aircraft traveled 530 miles and covered much of the country, including the major cities Beersheba, Jerusalem, Tel Aviv and Haifa. The Air Force also held acrobatic shows above cities and army bases throughout the country, from the morning until the afternoon.

Among the planes on display were three of Israel’s five F-35s, which were welcomed with much fanfare in recent months. Israel — the first country other than the United States to get the state-of-the-art fighter jet — plans to purchase a total of 50 of the fifth-generation stealth aircraft, which Israelis call the “Adir,” or “mighty one.”