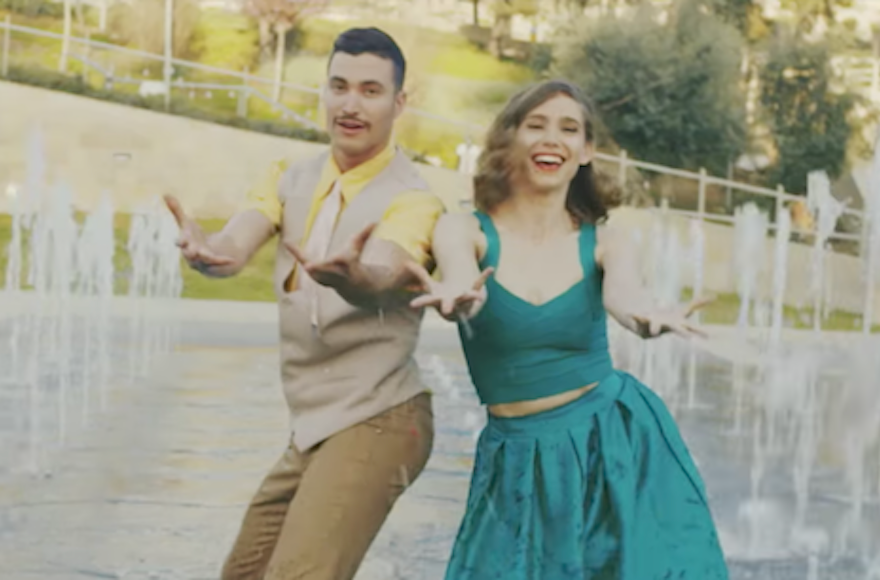 JERUSALEM (JTA) – You don’t need a bus for this tour of Jerusalem.

Just follow modern dancers Nadav Zelner and Tamar Sonn as they strut, vamp and jitterbug through some of the city’s most famous sites in a promotional video produced by Israel’s Foreign Ministry. The highlights include Machane Yehuda Market, the Israel Museum and the Tower of David.

“The idea is to show people the beauty of Jerusalem in a new way — through dance,” Zelner, who is also the choreographer, told JTA. “The city is really an incredible backdrop.”

Zelner helped create the video in honor of what Israel is calling Jerusalem’s jubilee year, or the 50th anniversary of Israel’s capture from the Jordanians of the eastern half of the city — including the Old City and its Western Wall — in the 1967 Six-Day War. Israel hopes to use the occasion as a celebration of its sovereignty over what Prime Minister Benjamin Netanyahu has called “the complete Jerusalem that shall never again be divided.” Both Israel and the Palestinians claim Jerusalem as their capital, and most of the world wants them to work out a compromise.

But that political background didn’t matter in making the video, said Zelner, 24, who spends most of his time in Tel Aviv creating and performing dances for theater, TV and dance companies, like Batsheva. He just wants people “to smile, to forget everything for two-and-a-half minutes and to enjoy Jerusalem.”

The music, by the way, is a cover of a 1930s song, “Jack, I’m Mellow,” a paean to the effects of — ahem — marijuana use recorded by the African-American blues singer Trixie Smith. It may be a nod to the spiritual high one might get on a visit to Jerusalem — or a plug for Israel’s growing reputation as a center of medicinal cannabis research.

And why not both?