How JTA reported the end of World War II in Europe 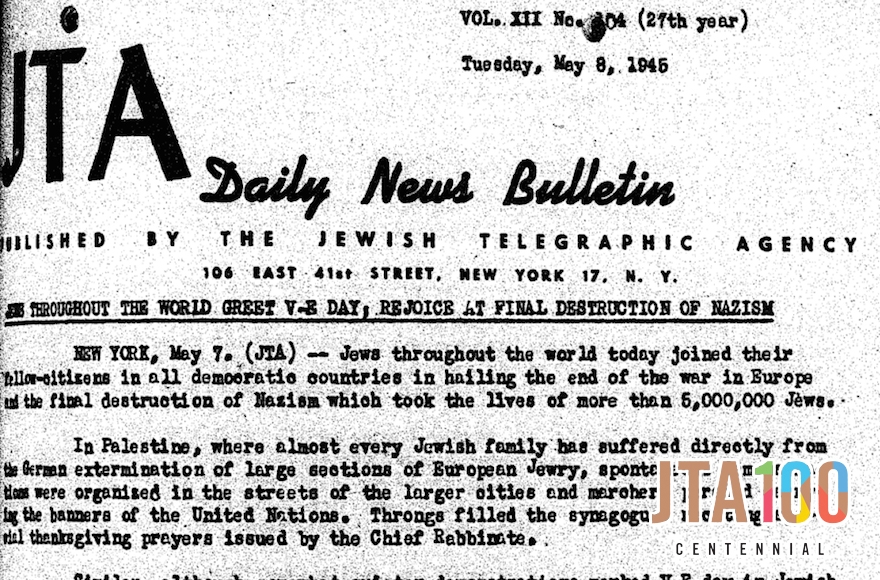 The JTA's Daily News Bulletin from May 8, 1945. (JTA)
Advertisement

(JTA) — On May 8, 1945, celebrations erupted around the world with news that Nazi Germany had officially surrendered to the Allies the previous afternoon. Victory in Europe, or VE Day, is marked every year on May 8 to recall the end of the six-year-long war in Europe. (Japan wouldn’t surrender until that August.)

JTA’s report of VE Day is poignant for its tone of celebration immediately tempered by the realization of the losses — and a tally of the Jewish dead that reflects how the full extent of Nazi atrocities was still not known. According to the JTA Daily New Bulletin of Tuesday, May 8, 1945:

Jews throughout the world today joined their Fellow-citizens in all democratic countries in hailing the end of the war in Europe and the final destruction of Nazism which took the lives of more than 5,000,000 [sic] Jews.

In Palestine, where almost every Jewish family has suffered directly from the German extermination of large sections of European Jewry, spontaneous demonstrations were organized in the streets of the larger cities and marchers paraded carrying the banners of the United Nations. Throngs filled the synagogues reciting special thanksgiving prayers issued by the Chief Rabbinate.

Similar, although somewhat quieter, demonstrations marked V-E day in Jewish communities which were only recently liberated from the Germans and in the large Jewish centers in the United States and other democratic countries.

Other stories in that day’s bulletin suggest the work still to be done in the wake of the devastating conflict. A dispatch datelined “Allach, Germany” — the location of the largest sub-camp of the Dachau concentration camp  — reports on the liberation of more than 3,000 Jewish survivors by American troops:

To the meagre [sic] list of survivors of the millions of European Jews can be added the names of 3,064 men and women who were found at this workcamp, which was a branch of Dachau. Of the survivors, 744 are women.

Foremost in the mind of every victim here is the thought of finding their families. And two of them have already done so. Rolf Geiplinger, an interior decorator from Vienna and son of a music professor there, was reunited at Allach with his wife Willi whom he had not seen for five years. He was brought here from Dachau where be had been confined temporarily after arriving there following an eight-day march from a camp at Kaufering. En route, he said, hundreds died.

Another arrival from Kaufering is Joseph Frock of Kovno, who said that a for weeks ago, while still at Kaufering, he and six other Jews were awakened at 3 a.m. to bury 170 American war prisoners who had been killed by the guards.

The report also lists some of the notable names among the survivors, including Bender Regner of Budapest, “the Hungarian middle-weight wrestling champion,” who is described as “shrunken and enfeebled from a fifteen-hour daily wind at the local concrete works,” and Oscar Mohr, the Amsterdam correspondent of the London Times and the New York Times. (Mohr, born in St. Petersburg, Russia, was arrested by the Nazis while serving in the resistance in Holland, his mother’s native country; after the war, he would serve the Netherlands as a diplomat in Indonesia, where he died in 1952 at age 44.)

The Bulletin includes this testimony from a survivor:

The women had many grim stories to tell, such as that of Bronya Tchaikovitch of Czentochowa, Poland. “My ten-year-old daughter, Genya,” she said, “who was standing besides me heard that those who were able to work would be allowed to live. She begged the Nazi; ‘Let me live, I can work,’ but he shot her before my eyes.”

The day also included — inevitably — Jewish politics. A dispatch from San Francisco reported on the United Nations Conference on International Organization, where delegates of nearly 50 nations were gathering to create the charter for the world body. Jewish leaders there urged a “speedy rebuilding of Jewish life in devastated Europe” and efforts “to enable immigration to Palestine of those surviving Jews who may wish to go there.”

But even at this pivotal moment in world and Jewish history, Jewish groups were divided. Various groups, including the World Jewish Congress, American Jewish Committee, the Jewish Agency for Palestine and the Synagogue Council of America, couldn’t agree to form a “united front” to push for what the AJC called “the final solution of the Palestine problem.”  AJC, for one, had long been reluctant to endorse a “Jewish commonwealth” in Palestine (a position that would fade with Israel’s establishment three years later).

Other reports in the dispatch reflect preoccupations specific to the era and themes that would echo for decades to come, including a tally of Jewish U.S. servicemen decorated for valor since the outbreak of the war (8,209); news that Chaim Weizmann, the president of the Jewish Agency, was recuperating from eye surgery; and an attempt by the former Mufti of Jerusalem — the pro-Nazi cleric who organized the 1936-1939 revolt in Palestine — to find safe haven in Switzerland.

“Authorities immediately ordered the plane back across the frontier,” JTA reported.