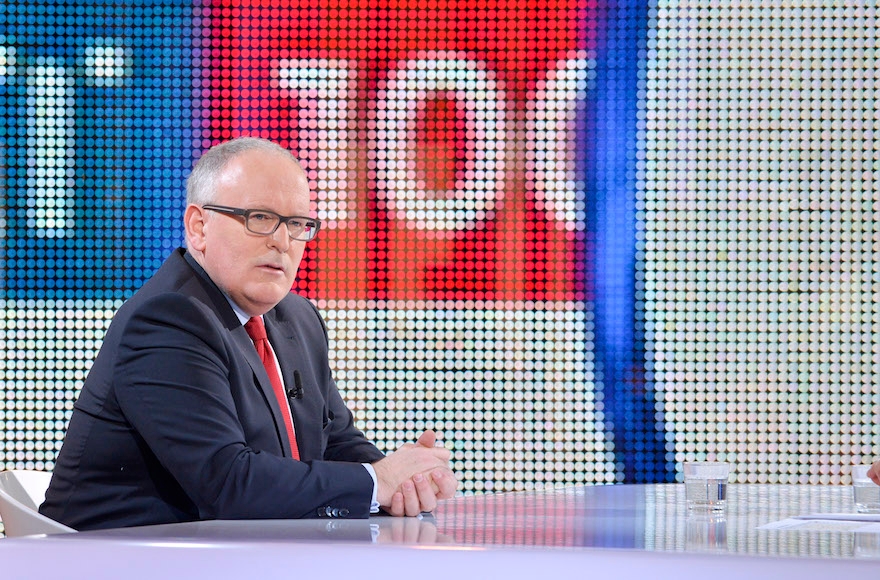 Rabbi Albert Guigui made the plea publicly in the presence of Frans Timmermans, the first vice president of the European Commission, during a rabbinical conference Tuesday in Hoofdorp, about 15 miles south of Amsterdam, where Timmermans spoke as the guest of honor before 250 members of the Conference of European Rabbis.

“We ask you as our friend and ally to join this fight, which is a fight for religious freedom,” Guigui told Timmermans during the 60th anniversary convention of the Conference of European Rabbis of the effort to block a ban.

Jewish and Muslim ritual slaughter of animals require animals be conscious when their necks are cut. The Jewish variant, shechitah, may only be performed by qualified professionals, known as shochtim, and according to strict regulations. The Muslim slaughter of animals is more liberal and may be performed by anyone for the production of halal meat.

Critics of both customs say they are more cruel to animals than industrial methods, though some scientists dispute the claim.

The customs have also come under attack by nationalists in Europe who perceive them as foreign imports whose growth is associated with Muslim immigration. A similar debate is taking place in many European countries on the non-medical circumcision of boys younger than 18.

Pinchas Goldschmidt, the president of the European Conference of Rabbis, said the fight to protect shechitah in Europe is one of the “main challenges” facing the continent’s Jewish residents today.

Timmermans during his speech reiterated his commitment and that of the European Union to fight anti-Semitism and defend religious freedoms. The former Netherlands foreign minister also said that according to his personal “point of view,” ritual slaughter should be “not be a problem“ if “it is done by people trained to do so.”

Timmermans did not indicate whether he intended to intervene in Belgium.

“On animal welfare, let the facts speak for themselves,” he said. “Let science testify as to the suffering of animals when they are slaughtered.” The same, he added, “applies to circumcision.”

Recent scientific studies both on the benefits and effects of circumcision and on the suffering of animals when slaughtered have produced contradictory results.