This Jewish attorney general is leading the Trump resistance 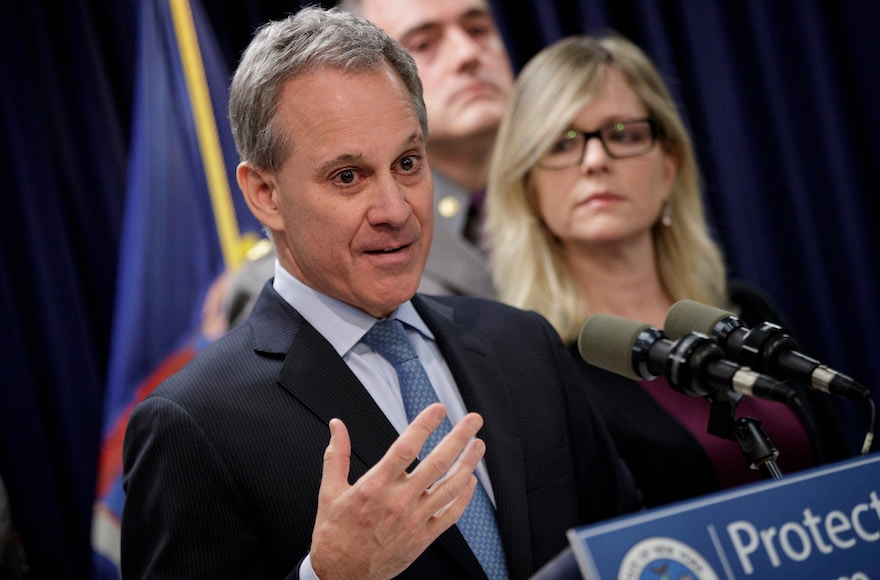 NEW YORK (JTA) – It was nearly Passover and Eric Schneiderman, the New York state attorney general, paused to wish his fellow Jews the best for the holiday.

“We are commanded not only to remember our story, but to imagine that we ourselves were enslaved in Egypt, and then freed – so that we may empathize with the plight of those who are fleeing oppression and danger today,” Schneiderman said in an April 10 statement.

Of course, though ostensibly about Passover, the statement was also a thinly veiled jab at President Donald Trump. After all, Schneiderman was among the litigants who got the courts to stay one of Trump’s first major executive orders, which temporarily banned entry into the U.S. by refugees as well as travelers from seven Muslim majority countries.

Since the election, he has been busy attacking Trump in a near daily barrage of lawsuits, statements, tweets and news conferences.

“According to the United Nations High Commissioner for Refugees there are now more than 65 million refugees worldwide — the most in modern history,” he said in the statement. “Passover serves as a timely reminder of our obligation to welcome those fleeing oppression, and to fight all forms of discrimination and subjugation in our own time.”

Schneiderman, whom Trump calls a “political hack,” is a leading figure among the assorted activists, influencers, lawmakers and lawyers who have united to undercut, contain and combat the developer and former reality star who is now running the country.

He is the lead strategist among the state attorneys general, all Democrats, who have blocked the Trump immigration bans. Schneiderman has also advised sanctuary cities how to protect undocumented immigrants and launched bids to frustrate the president’s plans to roll back Obama-era reforms in health care consumer and environmental protections, and to protect abortion rights.

Even so, he balked a little when a reporter called him the “Jewish face of the resistance.” It was the “resistance” part that unnerved him — New York’s top lawyer noted that he bucked Obama administration policies, too. (Schneiderman wanted more comprehensive bank reforms.)

But the “Jewish” part he liked.

“My work for justice is very much grounded in what I see as the Jewish tradition’s commitment to justice,” he told JTA recently in his lower Manhattan office.

Schneiderman switched handily into Hebrew and used the two biblical terms for justice, saying that “’mishpat’ and ‘tzedek’ are spoken of in the books of Moses.”

If “books of Moses” sounds a little Hollywood, circa 1954, that’s the vibe Schneiderman broadcasts: the earnest, slightly nerdy Jewish guy who will quietly but forcefully bring down the crazed and the corrupt.

“You always hold out hope people can change their ways for the better,” he said, and with the barest of shrugs suggested his skepticism at the prospect.

If Schneiderman is obsessed with Trump, he said he comes by the obsession honestly: The two were tangling two years before Trump declared for president, when Schneiderman sued Trump University, a real estate seminar, in 2013 for deceptive practices and false advertising. (Schneiderman and Trump had been in talks to settle since 2011.)

In the lawsuit, Schneiderman sought $40 million. Last year, after winning the presidency, Trump settled for $25 million, saying it was time to move on. Schneiderman said in a statement at the time that it was a “major victory” and a “stunning reversal,” and that he had the scars to prove it.

“Having no idea he would become president, I sued him and Trump University in 2013,” he told JTA. “I got a preview of the scorched earth tactics he used in the primary and the general election in 2016.”

At the time, Trump’s team set up a website to call attention to what it said was Schneiderman’s “gross incompetence.” The New York Post obtained notes from Schneiderman to Trump’s daughter Ivanka and son-in-law Jared Kushner asking them to donate to his campaign. (At the time, Kushner and Ivanka Trump were Democrats and not as closely entwined with the elder Trump’s political fortunes as they are now.) 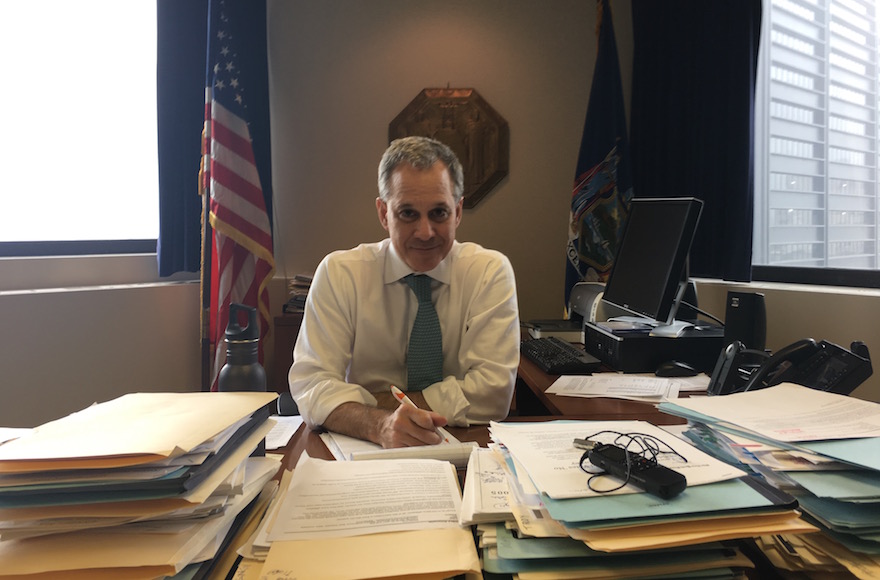 The close political combat taught Schneiderman a lesson: If Trump says he plans to scorch earth, get out the fireproof footwear. While pundits and politicos were predicting that Trump, once in office, would moderate his more extreme pledges, Schneiderman was putting his staff to work.

His office offered guidance to local authorities in New York to resist federal pressure to remove sanctuary protections for undocumented immigrants. Schneiderman also contacted Democratic attorneys general in other states and prepared the legal framework to challenge the executive orders on travel he was sure to come.

“We weren’t surprised by them coming out aggressively on some of the positions they took during the campaign,” he said. “We have more familiarity with him here than in other places, that goes without saying.”

The legal challenges to Trump’s orders, Schneiderman acknowledged, were deliberately filed in the states covered by the 9th Circuit Court of Appeals, noted as the most liberal-friendly appellate court. (The challenge to the first executive order was filed in Washington state; the challenge to the revised order was filed in Hawaii. Schneiderman also filed his own challenge in New York state.) Trump in a tweet accused the litigants of “judge shopping.”

Schneiderman said it was smart politics.

“We marshaled attorney-general resources as effectively as possible,” he said.

Trump’s defenders have noticed Schneiderman’s central role in the pushback.

Judicial Watch, a conservative legal activist group, skewered Schneiderman in April, saying, “New York stands out because it’s the only state in which the top law enforcement authority, a veteran elected official, is actively encouraging and assisting local governments to violate the law.” A New York Post editorial demanded that Schneiderman recuse himself on all matters related to Trump because “prosecutors aren’t supposed to choose their targets first, then hunt for incriminating evidence. That defines ‘bias.'”

Schneiderman, who attends services at B’nai Jeshurun, an independent Manhattan synagogue, works closely with the city’s Jewish establishment. Rabbi Joseph Potasnik, the executive director of the New York Board of Rabbis, said Schneiderman was always thoroughly prepared before taking on an adversary.

“He looks at the Torah, the weekly portion, and he also looks at the haftarah,” the reading from the books of prophets, Potasnik said, using a metaphor for studiousness.

“We’re very supportive of him taking it on,” he said.

Not all Jews are thrilled with Schneiderman’s robustly adversarial relationship with the president, especially when Schneiderman casts it as a matter of Jewish exigency. An Orthodox Jew deeply involved in state politics said Trump, as president, deserved a degree of deference in setting policy.

“Whether you like or agree with Trump, he is the president of the United States, and when the chief law officer of New York has declared personal war on the president, it’s suicide,” said the activist, who asked not to be identified in order not to anger Schneiderman. An official in Schneiderman’s office said it had received tens of thousands of messages of support from New Yorkers.

Another area of Schneiderman’s post-election fervor: combating hate crimes. Just nine days after Trump’s election, Schneiderman convened a news conference with representatives of minority groups to announce that he had issued guidance to law enforcement to better identify hate crimes.

The release did not mention Trump, and minority advocacy groups have longed pressed police agencies to be more aggressive in policing hate crimes. But Schneiderman said he was spurred in part by the new president.

“After the election, there was an uptick in hate crimes,” including against Jews, he said, citing New York Police Department statistics.

Is it fair to ascribe the increase in anti-Semitic attacks to the election of Trump, who has been friendly to the Jews?

“It took him a long time to condemn anti-Semitism,” Schneiderman countered. “We’re aware in the Jewish community that bias against one opens the door to bias against all.”

Schneiderman cited Trump’s broadsides against Muslims and Mexicans during the campaign as a spur for hate groups.

“It’s not wrong to lay something at someone’s feet if that’s something they said,” he said.