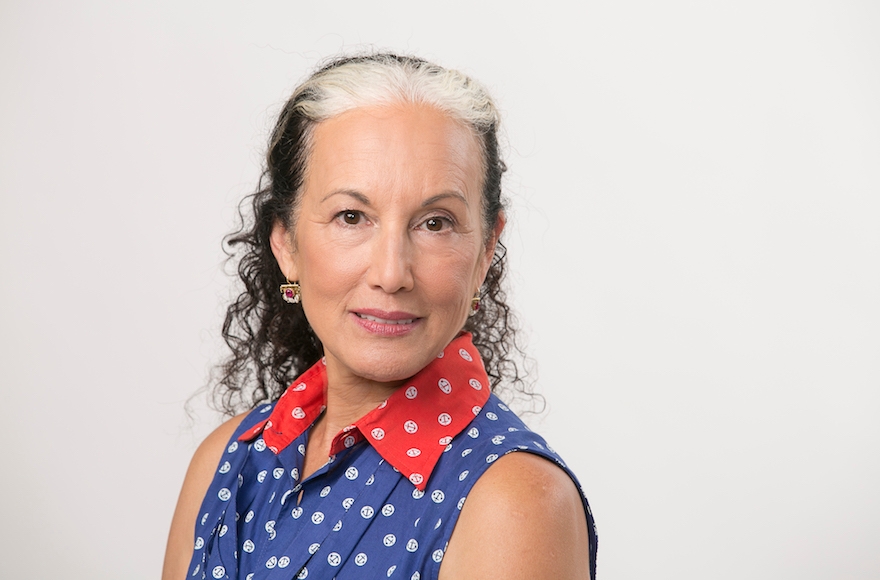 They might be the setting for any of a number of assignations, some more provocative than others. But the rooms are part of a clinic dedicated to a controversial form of sex therapy.

“Sex therapy is by definition couples therapy, and those people who don’t have a partner can’t have the therapy,” Ronit Aloni, 64, said in an interview at her clinic. “Surrogacy allows us to do the ethical thing and provide therapy to the people who need it.”

Aloni, a sex therapist with a distance-learning doctorate in sexual rehabilitation, has created a niche for sex surrogacy in this relatively conservative society. While she has her critics, she has won over many sex therapists, as well as Israel’s Defense Ministry and civil courts.

Of the 200 or so patients the clinic sees every year from across Israel, about a third work with a sex surrogate, with whom they engage in direct sexual activity. Accommodations are made for all types: gay or straight, Arab or Jewish, religious or secular. About 65 percent of the patients are male.

Their problems include physical disabilities, like paralysis or brain trauma, and mental disorders like autism or schizophrenia. About half have sexual disorders, such as vaginal spasms or erectile dysfunction. Nearly all them are nervous about intimacy.

“It’s not really about sex,” Aloni said of sex surrogacy. “I sometimes tell my staff that we’re really an anxiety clinic.”

Aloni employs some 30 sex therapists, physiotherapists, social workers and doctors along with a dozen or so surrogates. Once a week, patients meet with a surrogate, a “regular person” who is trained at the clinic, and separately with a sex therapist, who oversees the treatment. The treatment typically lasts three to four months, though it can stretch for years.

Patients and surrogates must be tested for sexually transmitted diseases and use contraceptives.

Given the requirements and the cost the clinic attaches to sex surrogacy — up to $2,000 a month, more than three-quarters of the average Israeli salary — few sign up in search of casual sex, according to current and former staffers.

“I believe some people come in wanting to get laid,” Idan Milchan, a co-director of the sex therapy clinic at Ichilov Hospital in Tel Aviv who used to work for Aloni and refers patients to her, said in a phone interview. “But the therapists are professional enough to understand if a guy or women has a sexual problem or not, and it’s so expensive that people can find cheaper sex.”

Typically, the patient and surrogate start their relationship with a date at a café or other public place. When they are ready to move beyond light touching, they meet for a 90-minute session in the red or green rooms. Penetration is the final step in the treatment and generally happens only in the last couple of meetings. Patients are then encouraged to pursue their own romantic relationships and continue meeting with their therapist.

“Talia,” who asked to go by a pseudonym to protect her privacy, has been a sexual surrogate at Aloni’s clinic for a few years and has worked with all types of patients, from quadriplegic soldiers to confident-seeming Tel Aviv businessmen. A fit, dark-haired woman in her 50s, she currently sees three patients a week and also works in art and education. She said she joined the clinic because she saw an opportunity to heal people.

“Maybe it sounds like a cliché, but I have an ability to love and not be afraid of being compassionate,” she said in an interview in the green room, where she was painting her nails. “I cuddle the patients in a very, very secure place and let them grow. I don’t like humanity to suffer.”

Though most of the clinic’s patients are not religious, young Orthodox and haredi men who are attracted to the same sex sometimes come to the clinic to learn to have sex with women. In most cases they are sent by rabbis. They are treated by Orthodox therapists and “kosher” sex surrogates who are willing to use the mikvah, or ritual bath, before engaging in sex with their clients. 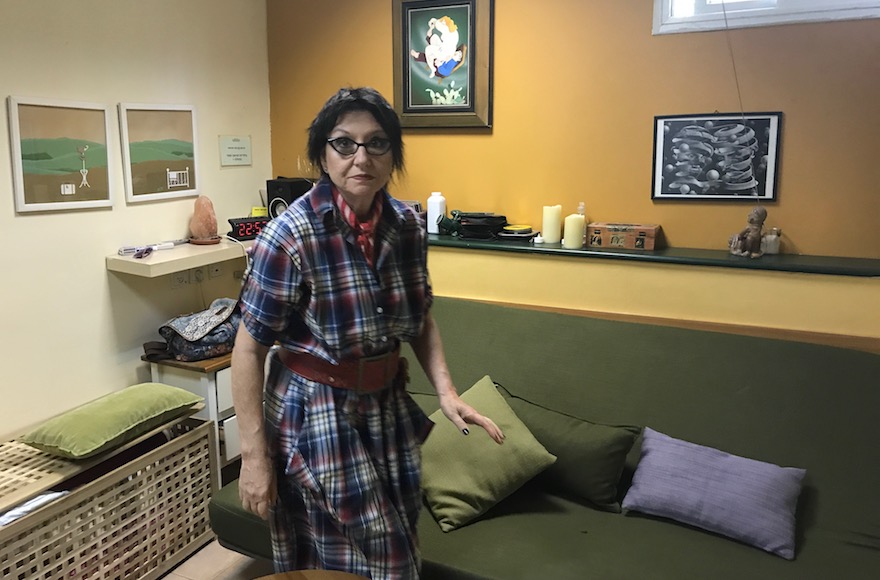 Office manager Ruta Cohn tidying up the green room at the Ronit Aloni Clinic in Tel Aviv, May 9, 2017. (Andrew Tobin)

Aloni said she makes clear to the men — and their rabbis — that she cannot change their sexual preference, but only help them manage it. She rejected any comparison to conversion therapy. That practice, which claims to change one’s sexual orientation from homosexual or bisexual to heterosexual, is opposed by the U.S. psychiatric and psychological establishment and outlawed in many states. There is no law in Israel against conversion therapy, but the Health Ministry advises against it.

“It’s not about conversion. We don’t do that,” Aloni said. “If you’re homosexual, you’re homosexual. But we know sexuality is on a spectrum. Some people can function both ways. We go through the process with them and talk about what they’ll win and what they’ll lose. It’s not for me to judge.”

Aloni brought sex surrogacy to Israel in the late 1980s after studying the treatment in the United States, where it was first developed by gynecologist William Masters and psychologist Virginia Johnson in the 1950s. She started by treating severely wounded kibbutznik soldiers, and in 1999 opened her Tel Aviv clinic to the general public.

At this point, Aloni said, sex surrogacy is more mainstream in Israel than in any other country she is aware of — though hers is the only major center for the treatment. The Defense Ministry sends her severely wounded soldiers and pays for their treatment. And thanks in part to her paid expert testimony, Israeli courts have awarded litigants in personal injury lawsuits damages to pay for surrogate therapy.

Sex therapists from hospitals and other clinics across Israel refer patients to Aloni, who is a well-respected member of the Israel Society for Sexual Therapy Training professional association. Several said the treatment has shown results when nothing else seems to work.

“Like every profession, it’s not 100 percent effective,” said Milchan, a former chair of the Israel Society for Sexual Therapy Training. “But if it didn’t work period, it would have extinguished already. It’s still here. It does work.”

Aloni also works outside the clinic to promote sex surrogacy. With a signature shock of white at the front of her curly black hair and academic-chic style, she is a regular presence on Israeli TV and teaches a course on sexual rehabilitation at the Tel Aviv University Medical School. She also lectures at conferences abroad and has contributed to several English-language books on sex therapy. At least a couple dozen foreign patients visit her clinic most years.

Still, Aloni has plenty of critics. It is commonly argued that sex surrogacy is no different than prostitution. (It is legal to pay and charge for sex in Israel, though pimping, brothels and sex trafficking are outlawed.) Many Orthodox Jews condemn the treatment.

David Ribner, a Jerusalem-based Orthodox sex therapist, praised Aloni as “highly competent” and “professional.” But he said he opposes sex surrogacy on professional and ethical grounds.

“I do not refer patients to surrogacy ever. I’ve been in this business more than 40 years, and I’ve never encountered a situation where surrogacy would be the only way out,” he said in a telephone interview. “And as an Orthodox Jew, I believe sex only takes place in the context of marriage, and this is not marriage.”

Ribner said he would like to see sex surrogacy regulated along with the entire sex therapy field in Israel. His main professional problem with the treatment is the messy way it ends.

“The relationship between the surrogate and the patient is complex,” he said. “I think the ending can be highly problematic, especially with patients for whom this might be their first meaningful sexual experience.”

For her part, Aloni said she worries regulation would interfere with effective treatment. She and Talia agreed that the patient-surrogate relationship could be emotionally fraught and painful to end, but said the clinic was set up to handle it.

While Aloni would not facilitate interviews with current or former sex surrogacy patients, many have contributed testimonials on the clinic’s website. They credited the experience with teaching them how to get close to others, and in some cases preparing them for romance and marriage. But some also expressed heartbreak.

“My treatment is over and I don’t know what will happen in the future. At the moment, my heart is broken and I am quite unhappy,” one female patient wrote. “All that remains is for me to hold on to the belief that I will continue to enjoy [my surrogate’s] positive and constructive influence on my future interpersonal behavior and sexuality.”