What Trump told the Russians, and why allies like Israel are worried 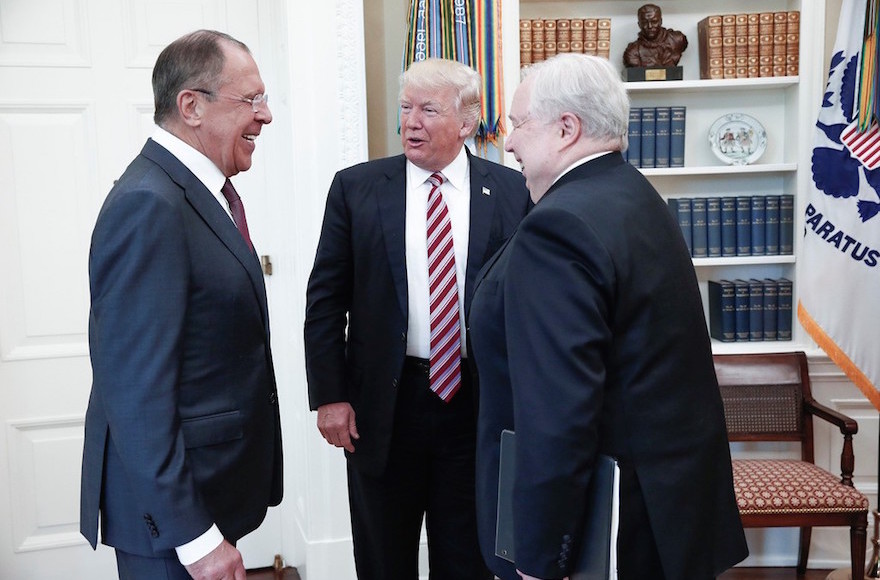 WASHINGTON (JTA) — As of Tuesday morning, thanks to the unfiltered confessional that is Twitter, we now know this: President Donald Trump shared information with Russia about “terrorism and flight safety,” as he put it.

Trump was responding, after about 12 hours, to a Washington Post report that he shared highly classified information with the Russian foreign minister and Russian ambassador when he met with them last week. The information, sources told the Post and confirmed to other outlets, could be used to reveal sources of an ally’s intelligence on the Islamic State terrorist group.

Which ally has not been revealed: The New York Times, in following up the Washington Post’s scoop, said it is a Middle Eastern ally known to be wary of sharing its intelligence. Israeli commentators already were speculating the impact if Israel was the country in question, although it is hardly the only ally fitting the bill.

Trump in his tweets confirmed that he shared the information but did not say whether or not it was classified. However, he specified that he had an “absolute right” to share the information, which could refer to laws that exempt the president from restrictions on revealing classified information.

“As President I wanted to share with Russia (at an openly scheduled W.H. meeting) which I have the absolute right to do, facts pertaining to terrorism and airline flight safety,” Trump said. “Humanitarian reasons, plus I want Russia to greatly step up their fight against ISIS & terrorism.” ISIS is an acronym for the Islamic State terrorist group.

As President I wanted to share with Russia (at an openly scheduled W.H. meeting) which I have the absolute right to do, facts pertaining….

…to terrorism and airline flight safety. Humanitarian reasons, plus I want Russia to greatly step up their fight against ISIS & terrorism.

A lot of questions are not yet fully answered:

What did Trump reveal?

According to the Washington Post, Trump shared information about Islamic State plans to bomb aircraft with laptops. The Trump administration has banned laptops as carry-on luggage on U.S.-bound planes originating in some Middle Eastern countries, and reportedly plans to extend the ban to Europe.

The crux is in the details of what he shared.

“He described how the Islamic State was pursuing elements of a specific plot and how much harm such an attack could cause under varying circumstances,” the Washington Post reported, and “revealed the city in the Islamic State’s territory where the U.S. intelligence partner detected the threat.” The Times said the information Trump relayed was “granular” — that is, highly specific.

Is the White House denying it?

Not quite. Officials have said the story, “as reported,” is “false” — but things get murkier on the details. H.R. McMaster, the national security adviser, and Rex Tillerson, the secretary of state, who were in the room, said Trump did not discuss “sources, methods or military operations.” But the newspapers’ accounts do not allege that sources or methods or military operations are what were revealed. Instead, the concern is that the Russians and their allies could use details in the information to track down the source.

How likely is it that the Russians could trace the information to its source?

According to reports, the White House is taking seriously the threat that the information could be sourced. Thomas Bossert, Trump’s assistant for counterterrorism, alerted the CIA and the National Security Agency, and one of his subordinates said the information should be removed from internal summaries of Trump’s meeting.

What are the stakes?

Huge. It’s been enormously difficult to infiltrate the Islamic State, which cultivates only the truest believers for its operations.

Do we know which Middle Eastern ally provided the information?

No. Any one of the United States’ Middle East allies — Israel, Jordan, Saudi Arabia, Turkey, Egypt, the Gulf states — could fit the bill of a country that would prefer that the U.S. closely hold whatever intelligence it shares.

Trump had a call scheduled with Jordan’s King Abdullah on Tuesday morning, but it may have been set up previously, ahead of Trump’s Middle East tour next week.

Israelis were wondering if it was their country that was potentially burned in the exchange. Ronen Bergman, the well-connected Yediot Acharonot reporter, reposted on Twitter a January story revealing that intelligence officials in the outgoing Obama administration warned Israeli counterparts to be careful about what kinds of intelligence they shared with the Trump administration because of alleged ties between Russia and some members of Trump’s entourage.

“The president has full authority to reveal classified information, but what will the ally think,” Keren Betzalel, an editor on Israel’s Channel 2, wrote Tuesday morning on Twitter.

Danny Yatom, a former director of Israel’s Mossad intelligence agency, told The Jerusalem Post that he did not know if Israel was the ally, but expressed concerns about Trump’s revelations.

“If the information is sensitive, it can harm the security of the intelligence source or lead to other damage,” he said.

Alan Dershowitz, the pro-Israel activist and constitutional law professor who has been counseling patience and restraint to a U.S. Jewish community rattled by Trump’s flirtations with the far right, has now had it with the president.

“This is the most serious charge ever made against a sitting president of the United States,” he told CNN. “Let’s not underestimate it.”

Dershowitz also speculated that either Israel or Jordan was the unnamed country potentially compromised as a result of the incident.

So if the ally is Israel, what’s at stake?

One of the closest U.S. intelligence relationships is with Israel. It was launched in 1956 when Israel secured Nikita Khrushchev’s “secret speech” to a Communist congress denouncing Stalin’s reign of terror, signaling an evolution in how the Soviet Union would conduct its domestic and foreign policies. Speech in hand, the first stop for Mossad director Isser Harel was the CIA.

More recent cooperative successes reportedly include Stuxnet, the computer virus that crippled Iran’s uranium enrichment program in 2009-10, helping to bring the country to the negotiating table to talk about curbing its nuclear program, and the 2008 assassination of Hezbollah’s operations chief Imad Mughniyeh, as well as the exposure and frustration of multiple planned Hezbollah strikes in Europe and elsewhere. As parlous as diplomatic relations between the Obama administration and the Netanyahu government could get, officials in both countries agreed — and often emphasized — that intelligence sharing intensified over recent years.

Why would the Russians burn Trump?

The information is about the Islamic State, purportedly an enemy shared by the United States and Russia. Despite Russia’s claimed aim of crushing the Islamic State, its focus has been fending off others seeking the removal of Russia’s longtime ally in Syria, Bashar Assad. Defeating the terrorist groups is not the priority for Russia that it is for the United States, perhaps because keeping the Islamists in place could decrease international pressure to bring down Assad.

How (ticked) off are folks?

(Ticked) off. David Cohen, until recently the deputy director of the CIA and a veteran of both Republican and Democratic administrations, published an extraordinary op-ed in The New York Times on Tuesday lambasting the Trump administration for cozying up to autocracies like Russia’s Putin regime and describing the risks it posed. Citing the revelations of Trump’s conversations with the Russians as an example, Cohen said: “No one can say how many potential spies will decide that working for America is not worth the risk. But the administration’s rejection of the American idea will surely mean that some will say no.”

Trump’s support among Republicans and conservatives who had backed him through other controversies in his young presidency also appears to be eroding.

“They’re in a downward spiral right now and they’ve got to figure out a way to come to grips with all that’s happening,” Sen. Bob Corker, R-Tenn., the chairman of the Senate Foreign Relations Committee, was quoted by Buzzfeed as saying.

What does this mean for Trump’s Middle East tour?

Trump visits Saudi Arabia, Israel and the Palestinian areas next week. The pomp and circumstance — including stops at the Western Wall, Masada and Bethlehem — are likely to stay in place.

What we won’t know, for now, is how the conversations typical of such tours between lower-level officials — among them those who deal with intelligence — will play out. Will the Saudi, Israeli and Palestinian intelligence agencies be as ready to dish?