The pro-Israel right is starting to feel unease with Trump 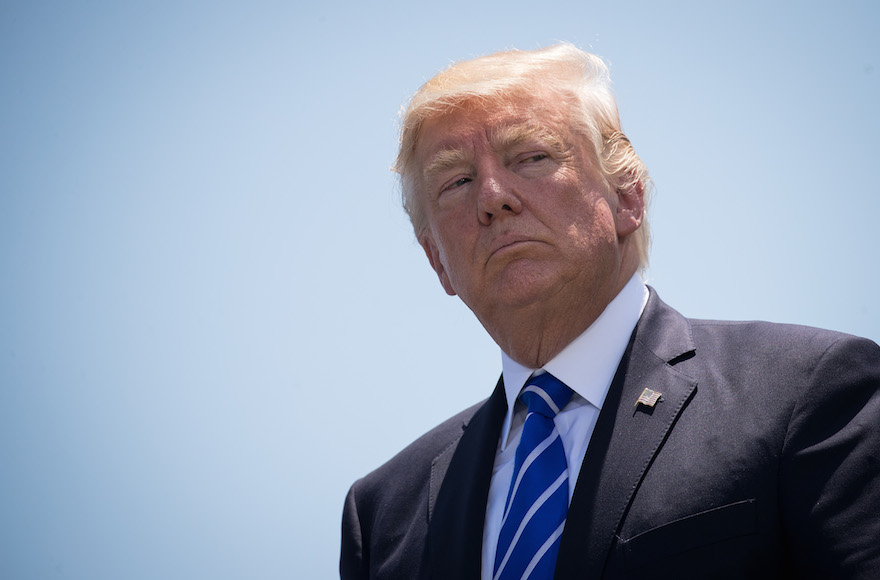 WASHINGTON (JTA) — The Zionist Organization of America launched two broadsides against a Trump administration it has ardently defended, signaling a growing unease on the pro-Israel right with the president’s Israel policies.

The ZOA, the flagship for the conservative pro-Israel community, slammed President Donald Trump for retreating from a campaign pledge to move the U.S. Embassy from Tel Aviv to Jerusalem. It also attacked the appointment of Kris Bauman, a veteran Obama administration negotiator, as the Israel adviser on the National Security Council.

Criticism of Trump from the Jewish right, while growing, is almost always accompanied by a caveat that his Israel policies are better than those of his predecessor, Barack Obama, and praise for some of his appointments.

The ZOA statements came Wednesday, the same day an array of Jewish groups held a celebration in the Capitol of the 50th anniversary of the reunification of Jerusalem.

During the celebration Republican lawmakers – without naming the Trump administration – decried the failure to move the embassy to Jerusalem. One of those present, New York Rep. Lee Zeldin, one of two Republican Jews in Congress, later released a statement explicitly criticizing Trump and urging the move.

Trump the candidate had vowed to move the embassy as one of his first acts upon assuming the presidency, but since elected has retreated from the pledge. This week, an unnamed top U.S. official told Bloomberg News that the relocation from Tel Aviv was off the table for now.

The story prompted expressions of concern of varying intensity from the Jewish right.

Morton Klein, the ZOA president, said in a statement that the slowness to move the embassy “sends a message of weakness” and called it “painful.”

Zeldin, one Trump’s most prominent Jewish supporters during the presidential campaign, said in his statement that the Bloomberg report was “an ill-timed mistake on the part of the administration to make this decision and announcement.”

Nathan Diament, the Washington director of the Orthodox Union, the umbrella group with a constituency that according to polls was lopsided in its support for Trump last year, said in an interview that those voters were likely “disappointed” with the delay.

Klein in an interview Thursday offered up the caveat that he was still grateful that Trump had won the election.

“This guy in his heart and soul is very pro-Israel in a serious way,” he said, naming among other appointments Nikki Haley, the outspoken U.S. ambassador to the United Nations. “So many of us had high expectations it would be 100 percent on Israel; that might have been too high an expectation. He’s so much better than Obama or than Clinton would have been,” referring to Hillary Clinton, the Democratic nominee.

Matt Brooks, the Republican Jewish Coalition director, said Trump’s Jewish critics should keep the bigger picture in mind: His first tour overseas, next week, will include Israel and a visit to the Western Wall.

“It should be comforting, and those who are critical should note the symbolism of the president doing it at this time,” he said, noting the 50th anniversary of the reunification of Jerusalem. “It sends a symbolic message and one that should resonate throughout the Jewish community and the international community.”

Much of the pro-Israel right remains a strong area of Trump support on foreign policy. Breitbart News, with several alumni occupying key posts in the administration, has not advanced tough criticisms of the president’s Israel policy, although it has been critical of Trump on some domestic issues.

Conservative groups that reviled the Obama administration’s nuclear deal with Iran, chief among them the Foundation for Defense of Democracies, are pleased with Trump’s policies. While Trump has not scrapped the deal, he has ramped up his rhetoric targeting the regime and added sanctions targeting Iran’s missile testing.

Conservative pro-Israel voices — among them Klein — have been outspoken as well in defending top Trump advisers who hail from the “alt-right,” a loose assemblage of anti-establishment conservatives that includes anti-Semites but also strident defenders of Israel.

Still, there are signs that unease with Trump’s Israel-related choices is deepening on the right. The tendency in Trump’s first months in office was to blame any decision that the pro-Israel right found unappealing on officials Trump did not appoint – civil service professionals whose tenure dated back to the Obama or George W. Bush administrations, or even further back.

But now, some of the fire is being directed at Trump appointees. H.R. McMaster, Trump’s national security adviser, has earned opprobrium from the pro-Israel right wing for his bid to sideline Ezra Cohen-Watnick, a young NSC staffer who is known for his hard-line Iran views. Trump nixed McMaster’s decision to move Cohen-Watnick to another agency.

Klein based his assessment on a screed against Bauman published last week in FrontPageMag, which unearthed a 2009 academic work by Bauman citing views that recommend accommodating Hamas as a necessary evil in any negotiations toward a final status outcome. Bauman also is unstinting in describing Hamas’ brutality and terrorism in the paper.

Daniel Shapiro, until January the U.S. ambassador to Israel, on Wednesday called Klein’s attacks the “lowest of low blows,” noting that Bauman’s brief was to improve security for Israel in the West Bank ahead of a final status agreement.

Also troubling for the pro-Israel right has been Trump’s warmth toward the Palestinian Authority leadership, particularly P.A. President Mahmoud Abbas, whom Trump welcomed at the White House earlier this month and with whom he will meet in Bethlehem next week.

“I’m disappointed he brought a guy who rewards terrorists who murder Jews to the White House,” Klein said, referring to P.A. subsidies for families of jailed and killed terrorists.

The White House said in its readout of the Trump-Abbas meeting that Trump raised the issue of the payments and urged Abbas to stop them.