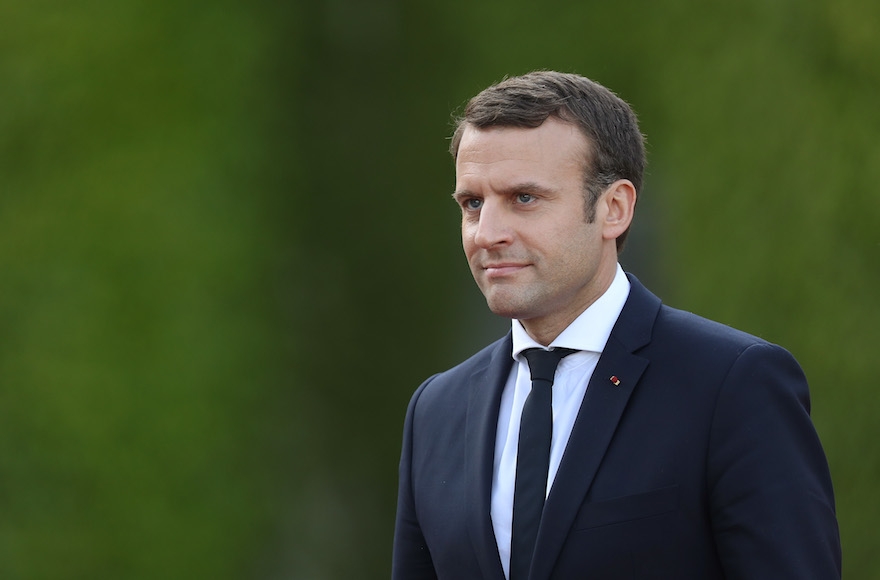 French President Emmanuel Macron about to meet with Angela Merkel at the Chancellery in Berlin, May 15, 2017.(Sean Gallup/Getty Images)
Advertisement

(JTA) – For the second time this month, the party of French President Emmanuel Macron withdrew from its parliamentary elections ticket a candidate who promoted online a boycott of Israel.

William Tchamaha was removed Thursday from the En Marche centrist party’s list in the northern Seine-Maritime in next month’s elections, the news site Actu reported.

CRIF, the umbrella group of French Jewish organizations, had called for his removal last week on Twitter, citing his support for the boycott campaign. Promoting a boycott of countries or their citizens is illegal in France, where it is classified as hate speech as per legislation from 2003.

“A state outside the law that despises the law,” Tchamaha wrote Feb. 8 on Twitter in a message that has since been deleted. “Boycott Israeli products and [apply] an economic embargo!”

In 2015, Tchamaha tweeted about the slaying by Israeli police officers of Palestinians while they were trying to carry out terrorist attacks against Israelis.

“The massacre continues and the Palestinians get the blame,” he wrote.

A spokesman for the party of Macron, a centrist who won the May 7 elections against the far-right candidate Marine Le Pen, neither confirmed nor denied to Actu that Tchamaha’s removal from the ticket was connected to the tweets.

“He no longer corresponded with the values that we uphold,” the party’s elections committee said without elaborating.

Earlier this week, Macron presented a diverse Cabinet of 22 ministers, 11 of them women, that features critics of the Jewish state as well as advocates.

Last week, En Marche withdrew from its list another candidate that CRIF had urged the party to withdraw: Christian Gerin, a journalist who was taken off the ticket a day after he was nominated. The removal also was widely understood to be in connection with messages he wrote in 2013, throughout last year and this year on Twitter.

In one tweet, flagged as “anti-Semitic” by the LICRA watchdog against anti-Semitism and racism, he wrote, “When will there be a separation between CRIF and state?” Gerin also wrote that Manuel Valls, a former prime minister under outgoing President Francois Hollande, is “virulently Zionist, racist and an Islamophobe.” Another tweet said “The only solution: BDS.”

Laurence Haim, a spokesman for en Marche, confirmed to the France Bleu that the suspension was over the tweets.