Israel gave Trump the royal treatment he longs for back home 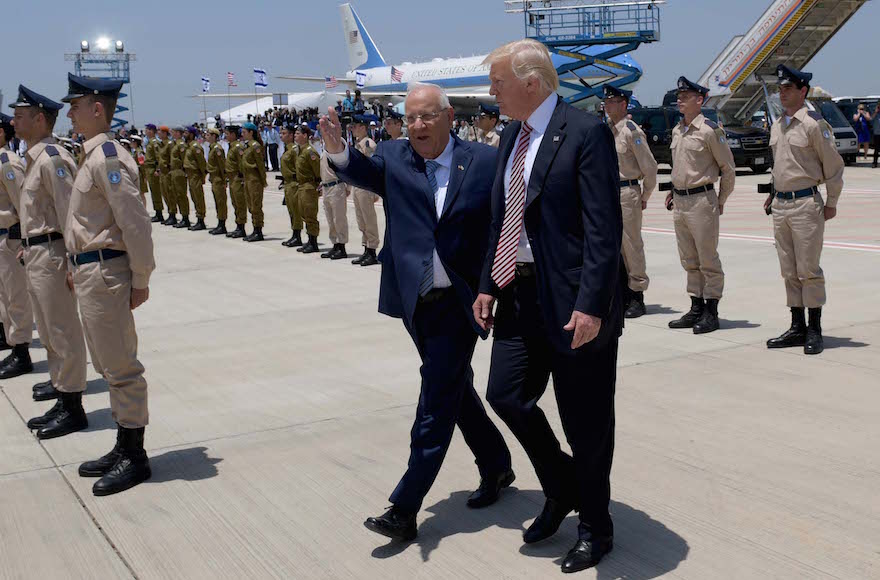 JERUSALEM (JTA) – President Donald Trump must have felt like he was back behind his desk at Trump Tower.

During his whirlwind visit to Israel and the West Bank on Monday and Tuesday, the U.S. leader was treated with the deference befitting a CEO. His words were greeted with rapturous applause and vows of support — a change from the investigations and leaks he complains about in Washington.

After one of multiple standing ovations during his speech Tuesday at the Israel Museum in Jerusalem, a beaming Trump joked with the crowd, “Thank you. I like you, too.”

Beyond the niceties, Trump won some real concessions during the trip. As he noted repeatedly, both Israeli Prime Minister Benjamin Netanyahu and Palestinian Authority President Mahmoud Abbas pledged to work with him toward his “ultimate deal” – without mentioning preconditions. But there is little faith in either leader’s ability to deliver much for peace and no specifics were announced.

Speaking ahead of Trump at the Israel Museum, Netanyahu said, “President Trump, working with you, I believe we can advance a durable peace between Israel and its Arab neighbors, as well as the Palestinians, because of the common danger that the Arab world and Israel face from Iran, and because of the leadership that you bring to this process.”

In Bethlehem hours earlier, Abbas said he hoped Trump “will go in history” as the president who finally achieved Middle East peace.

Daniel Shapiro, the U.S. ambassador to Israel under President Barack Obama, said both leaders appeared eager to accommodate the new president — partly out of fear of how he would react to rejection.

“Because he’s an unusual person and unpredictable, he has some leverage,” Shapiro told JTA. “Nobody wants to get caught saying no, and they haven’t. They haven’t necessarily said yes, but it explains why the initial resistance others have encountered, that we encountered, may not be as strong this time.”

Trump made it relatively easy for his hosts to agree with him by demanding little during the visit. Apparently satisfied for now with recent tweaks in Israel’s West Bank policy, Trump made no reference to Jewish settlements in the territory. Nor did he mention the Palestinian state that the United States and Israel officially support establishing there, but which Netanyahu has ceased referring to.

On Monday, responding to a request by Education Minister Naftali Bennett at Ben Gurion Airport to recognize Jerusalem as Israel’s capital, which would reverse decades of U.S. neutrality on the city, Trump replied simply, “That’s an idea.”

Trump did, however, subtly repeat his admonition of the Palestinian Authority to stop encouraging terrorism, telling Abbas, “Peace can never take root in an environment where violence is tolerated, funded and even rewarded. We must be resolute in condemning such acts in a single unified voice.”

And he seemed to reject Netanyahu’s preferred plan to normalize Israeli-Arab relations as a step toward a peace agreement with the Palestinians, describing the reverse chronology: “I also firmly believe that if Israel and the Palestinians can make peace, it will begin a process of peace all throughout the Middle East.”

Shapiro said that Trump has already said enough to make clear his vision of peace is not much different from Obama’s and other recent predecessors: direct Israeli-Palestinian peace talks toward a two-state solution, with Arab support from the outside. While Trump benefits from growing Arab interest in working with Israel to counter Iran and the Islamic State group, Shapiro said, not much could be inferred from Israeli and Palestinian acquiescence to talks.

“The parties are very well practiced at making generally positive noises without really changing their behavior,” he said. “It’s possible the president and his team are going through a learning process where that’s the nature of the conversation they’re having.”

Shlomo Brom, the head researcher on Israeli-Palestinian relations at the Institute for National Security Studies, said if and when Trump presents a more concrete peace plan, Israel and the Palestinians would likely try to go along with it — each waiting for the other to play spoiler. But they see little to gain and much to lose politically from making significant concessions. Ultimately, he said, they would have a hard time summoning the political will necessary to make peace.

Netanyahu, who leads a historically right-wing government, struggled much of Sunday to get his ministers to approve even modest measures aimed at improving the Palestinian quality of life. Bennett and Justice Minister Ayelet Shaked, both of the pro-settlement Jewish Home party, voted against a measure to boost Palestinian building in Area C of the West Bank, which Israel fully governs.

It does not help that Netanyahu is under police investigations for alleged corruption, which he denies.

For his part, Abbas is historically unpopular with his people and, at 82 years old, likely in the twilight of his presidency. Popular discontent in the West Bank has taken the form of violent protests on behalf of a mass hunger strike of prisoners in Israeli jails that has now gone on for six weeks.

Oded Eran, a former Israeli ambassador who served as the deputy chief of the Israeli Embassy in Washington, D.C., said Netanyahu and Abbas are not the only ones with political challenges. He said Israel and the Palestinians do not expect Trump to be around for long given the investigations into potential collusion between his associates and Russia.

“If I put myself into the shoes of the ministers or MKs [Knesset members] right now, why should we get excited?” The clock is ticking, the countdown has begun and all we have to do is wait and see – and not get into too many confrontations with the administration,” he said.

“The most I expect is some sort of very partial, very timid, very limited steps, which at most will slightly change the atmosphere so they can look like they’re doing something.”

Brom and Shapiro disagreed, saying Trump’s domestic situation does not affect his clout with Israel and the Palestinians. They said if Trump managed to convince each side to call the other’s bluff for long enough, he might just end up making significant progress toward peace. But that would require skillful diplomacy.

“When the United States has a serious policy and people who are good at moving forward this policy, to some extent it can move the two sides to agree on things they didn’t previously agree on,” Brom said. “So far there is no reason to be optimistic that this administration is capable of doing that. We’ve seen complete chaos.”