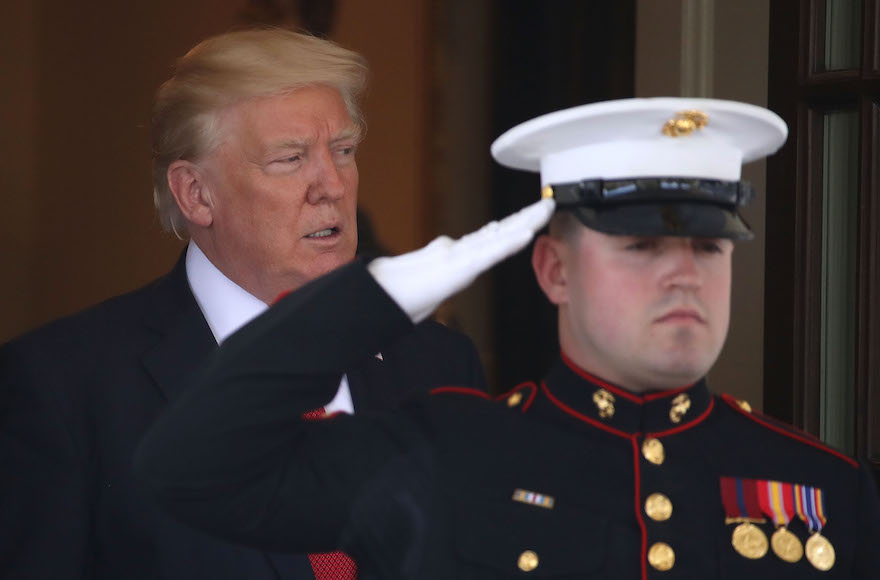 President Donald Trump waiting for the arrival of Columbian President Juan Manuel Santos at the West Wing of the White House, May 18, 2017. (Mark Wilson/Getty Images)
Advertisement

WASHINGTON (JTA) – It’s not quite schadenfreude, but some Jewish organizational officials are sighing in relief at President Donald Trump’s cascade of domestic woes, saying it may present opportunities for their relatively liberal agenda.

Domestically, some Jewish groups are welcoming the prospect that scandals and distractions besieging the White House could delay – if not scuttle – what they fear as radical changes in immigration, education and health care.

On foreign policy, a president wounded by domestic scandal is working all the harder to score a win on Israeli-Palestinian peace. Trump wrapped up a two-day visit to Israel on Tuesday, wowing Israelis with visits to the Western Wall and the Yad Vashem Holocaust memorial and insisting that both Israel and the Palestinians are ready for peace.

Scandals surrounding allegations of ties between Trump’s presidential campaign and Russia are proliferating instead of abating. His own perceived missteps have not helped: In recent weeks, these include blabbing to Russian government officials about highly secret intelligence reportedly sourced from Israel, and sacking his FBI director and offering the Russia probe as a rationale.

Now Republicans, who lead Congress, are treading carefully around the health care bill and Trump’s budget proposals that would slash benefits and are joining calls for broadening the probe into the Russia allegations — signals they may be less willing to have the president’s back.

That, coupled with the  Justice Department’s appointment of a special counsel to investigate the scandals – a development likely to further preoccupy the White House staff – is seeding hope among some liberal Jewish groups.

“This is slowing things down, and that’s not necessarily a bad thing,” said Melanie Nezer, the vice president for policy and advocacy at HIAS, the lead Jewish group on immigration and refugee issues.

Nezer said the scandals could compound the trepidation among lawmakers on the Hill already unsettled by the protests and court stays that followed Trump’s executive orders banning entry to refugees and travelers from some Muslim majority nations.

“There was already a lot of hesitation in Congress about the travel ban and the refugee ban and this could cause increased concern about moving forward on [Trump’s proposals on] refugees and immigration,” she said.

Abby Levine, who directs the Jewish Social Justice Roundtable, an umbrella organization for Jewish groups that pursue a largely liberal agenda, said the scandals were relieving pressure on her constituent groups.

“The scandals of the past few weeks are clearly the focus of attention of the White House and it’s very hard for them to get anything else done,” she said. “In a sense, there are positives to that in that there’s not the capacity to change legislation.”

Levine said that a White House too preoccupied with scandal to deal with Congress enabled Jewish organizations to dedicate resources to other areas where they could push back against the Trump agenda, citing as examples litigation by HIAS against the travel bans and advocacy by the same group and others on behalf of undocumented immigrants facing deportation.

Jewish groups dealing with health policy also are feeling relief at the White House retreat from advancing a version of the health care overhaul bill passed earlier this month by the U.S. House of Representatives. An array of Jewish groups decried cuts in the bill to state-run programs for the poor, among other rollbacks of Obama-era policies. The critics included heavy hitters like the Reform movement, the Jewish Federations of North America and the National Council of Jewish Women.

As with immigration, there was already a sense that Congress was retreating from the more dramatic policy shifts contained in the health care bill; Republican senators had said they would substantially revamp the House bill.

“The center of gravity has shifted to the Hill,” said one top Jewish organizational official, who asked to speak anonymously to protect relationships. “The White House is nowhere to be seen.”

Mark Olshan, the associate executive vice president at B’nai B’rith International, which maintains a network of Jewish homes for the elderly and advocates on health care issues, described a mixed blessing resulting from the White House’s preoccupations.

B’nai B’rith was especially concerned that the American Health Care Act could make it harder for seniors with preexisting conditions to afford quality health care. Olshan said health care advocates hoped for a delay in the Senate “so cooler heads would prevail” – and that the scandals seemed to be providing that delay.

“Clearly with what is going on, the attention has shifted,” Olshan said. But he said that was true on the Hill as well – and that was a problem. “What we’re trying to get accomplished on the health care side is not getting the attention it should.”

The scandals could also inhibit ambitious overhauls to the education system favored by Education Secretary Betsy DeVos, including shifting $1 billion in federal funds toward promoting “school choice,” allowing parents to choose to spend government funds on private and charter schools. Orthodox Jewish groups have eagerly backed DeVos’ proposals, while the Reform movement has opposed them.

Turmoil at home has led Trump to look overseas for relief. He has seized on his trip this week to Saudi Arabia, Israel and the Palestinian Authority, and the Vatican as a way to change the narrative.

His Twitter page is now graced with a background photo of Trump, clad in a yarmulke, touching the stones of Jerusalem’s Western Wall, and is peppered with the hashtag #POTUSAbroad.

The liberal pro-Israel community has noticeably eased its public opposition to the Trump agenda as he becomes more deeply invested in forging an Israeli-Palestinian peace. J Street, which in February presented itself as the home for the Trump resistance, has tamped down its criticisms.

Asked for comment, a J Street spokeswoman declined, but pointed to a May 18 statement by the group’s president, Jeremy Ben-Ami, who describes his lingering concerns about Trump but welcomes the direction of his foreign policy.

“If the Trump administration does follow a serious and pragmatic course that pushes both sides to take proactive steps and make compromises toward a two-state peace agreement, J Street would support such an effort,” Ben-Ami said. (Right-wing groups have correspondingly expressed alarm at Trump’s push for peace and his friendliness to the Palestinian leadership.)

Trump would not be the first president to look overseas when faced with troubles at home. In the final two years of their presidencies, Bill Clinton and George W. Bush were besieged by domestic woes and sought success abroad, including among Israelis and Palestinians.

Engaging with America’s allies makes sense as a strategy, said David Makovsky, a fellow at the Washington Institute for Near East Policy, because whatever a president’s domestic travails, America’s friends abroad remain invested in a robust American posture in their neighborhoods.

“The Arabs and [Israeli Prime Minister Benjamin] Netanyahu are determined to make this a successful visit because they want to ensure that ‘America First’ does not lead to American entrenchment away from the Middle East,” he said, referring to a Trump campaign slogan that many feared signaled isolationism.

He recalled that President Richard Nixon’s secretary of state, Henry Kissinger, negotiated disengagements in the months after the 1973 Yom Kippur War while Nixon was dealing with the Watergate scandal.

“They will compartmentalize,” Miller predicted of the national security officials. “They will not allow these distractions to erode the image of the United States as a credible power.”