In France, a Jewish TV celebrity is called out for gay bashing 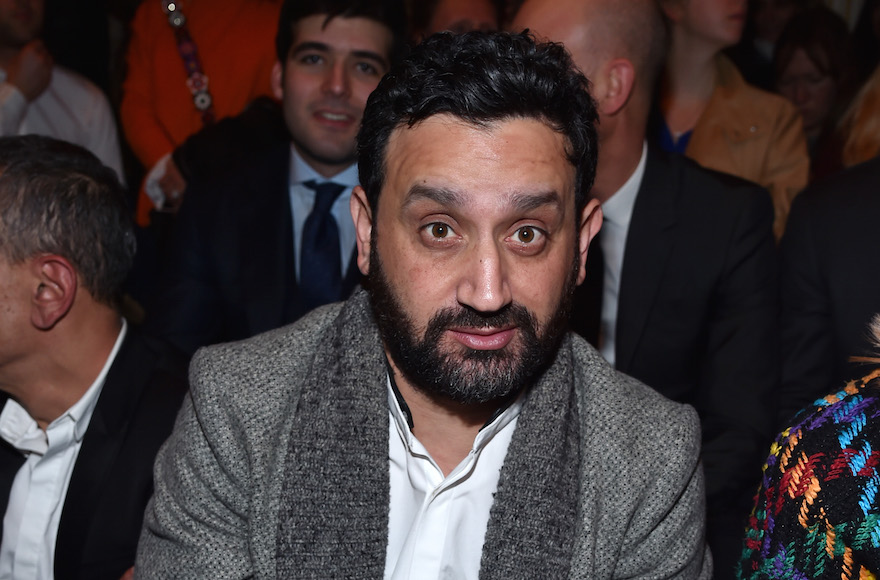 (JTA) — By airing live and graphic interviews with gay men about their sexuality, the Jewish television presenter Cyril Hanouna lifted briefly a decades-long taboo that usually keeps such content off mainstream broadcasts in France.

But instead of accolades, the 42-year-old comedian was forced to apologize for what thousands of viewers and key advertisers called a nasty bit of gay bashing.

On a May 18 episode of his sleazy “It’s Just TV” talk show on France’s Channel 8, Hanouna tricked his interviewees into talking about their fantasies and mocked them without ever telling them they were being heard by a million viewers on national television.

Hanouna’s stunt made headlines in the French media, giving the show free publicity in Le Figaro and Le Monde, among others. But it also exposed Hanouna to scathing criticism in the media and by 25,000 viewers who complained about the show to authorities, forcing him to apologize after advertisers dropped the show because of the controversy he created.

“I never intended to cause offense or humiliate anyone,” Hanouna wrote in an open letter Tuesday, adding that he thought that “laughing at anything with anyone is the best way of respecting our differences. I was wrong.”

Last year France had more reports of homophobic incidents than anti-Semitic and anti-Muslim ones combined. Some critics said Hanouna, who is frequently the target of hate speech against Jews and last year received death threats, should have known better.

During the episode, Hanouna received telephone calls from men who had found the number in a fake ad featuring a man’s muscular abdomen. Speaking in a high-pitched voice and a feminine intonation, he interviewed the men about their sexual preferences while struggling to keep a straight face and hush the giggly members of his show’s guest panel.

One caller, referencing the fact that the ad encouraged dirty talk, called Hanouna “you little bitch” on air before saying he would have sex with him. This sent Hanouna into a fit of laughter that forced him to hang up, red-faced and excited like a teenager prank caller.

But Hanouna probably stopped giggling when large advertisers — including Disneyland, Bosch, Chanel and Kenzo – dropped his show this week, citing the mocking of gay people. He apologized on the same day as the advertiser walkout, which the Libération daily said was one of the most striking cases of an advertisers’ boycott in France in recent years.

Hanouna’s apology followed a torrent of condemnations by gay rights and other minority groups, earning him a rebuke even from French Culture Minister Francoise Nyssen, who compared his actions to anti-Semitic hatred.

Calling the episode a “sad affair,” Nyssen said in a statement Wednesday, “Television must offer no room for attacks, be they sexist, racist, anti-Semitic or homophobic.”

Her mention of sexism was not random.

Last year Hanouna, who for years has been pushing the boundaries of civility by insulting guests on his show, had to apologize for the actions of a co-presenter, Jean-Michel Maire, who kissed the decolletage of a woman on the show without her consent.

Still, Hanouna found an unlikely advocate in Elie Semoun – another Jewish comedian who is often the subject of anti-Semitic jokes and hate speech, including by his former partner, Dieudonne M’bala M’bala, who has been convicted numerous times for inciting hatred against Jews.

On Tuesday, Semoun said that Hanouna was getting attacked for a “bad sketch” by enemies intent on settling old scores.

“I don’t think it merits this much criticism,” Semoun said during an interview on France 1’s “Daily” show. “It was a comedic accident.”