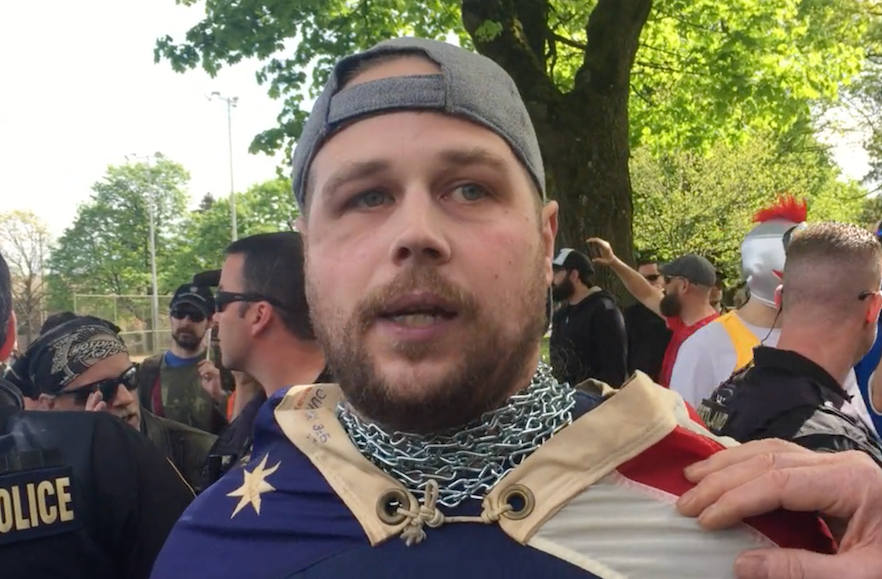 (JTA) — The Portland man who allegedly killed two men on a commuter train after they intervened as he spewed hate speech at two women who looked Muslim is a known local white supremacist, a local newspaper reported.

Jeremy Christian, 35, was arrested early Saturday and charged with murder, attempted murder and a hate crime, among other charges, in connection with the slayings Friday on the MAX, or Metropolitan Area Express Light Rail, the Portland Mercury reported.

Christian was harassing two women who looked Muslim, including one wearing a traditional hijab.

The Portland Police Bureau said in a report that the man “was on the MAX train yelling various remarks that would be best characterized as hate speech toward a variety of ethnicities and religions. At least two of the victims attempted to intervene with the suspect and calm him down. The suspect attacked the men, stabbing three, before leaving the train.”

Two of those stabbed, Ricky John Best and Taliesin Myrddin Namkai Meche, died from their injuries. Micah David-Cole Fletcher is recovering in the hospital.

In January he wrote: “Trump is the Next Hitler then I am joining his SS to put an end to Monotheist Question. All Zionist Jews, All Christians who do not follow Christ’s teaching of Love, Charity, and Forgiveness And All Jihadi Muslims are going to Madagascar or the Ovens/FEMA Camps!!! Does this make me a fascist!!! #MonotheistHolocaust FinalSolutionToTheMonotheistQuestion”

He is also against ritual circumcision, practiced by both Jews and Muslims. Among several posts that were anti-circumcision, anti-Semitic and anti-Muslim he wrote: “I want a job in Norway cutting off the heads of people that Circumcize Babies….Like if you agree!!!” The post came after Norway’s ruling party voted to ban ritual circumcision.

He also wrote earlier this year: “I just Challenged Ben Ferencz (Last Living Nuremberg Persecutor) to a Debate in the Hague with Putin as our judge. I will defend the Nazis and he will defend the AshkeNAZIs.”

The Anti-Defamation League in condemning the attack called for government policy to help counter such extremism.

“Now more than ever, ADL is sounding the alarm about domestic terrorism and hate crimes in America,” Jonathan Greenblatt, the group’s CEO, said in a statement. “The scourge of ideologically motivated violence of all kinds, no matter where it happens or in what form, is one of the key issues of our time. The deadly attack in Portland is not a rare or isolated event. Rather, this is the latest in a long string of violent incidents connected to right-wing extremists in the United States.

“This consistent threat requires consistent resources and we call on our leaders to condemn this brutal act of terror and craft policy to counter all forms of violent extremism, including white supremacy.”

Christian is scheduled to appear in court on Tuesday. He previously served prison time on robbery and kidnapping convictions, according to reports.