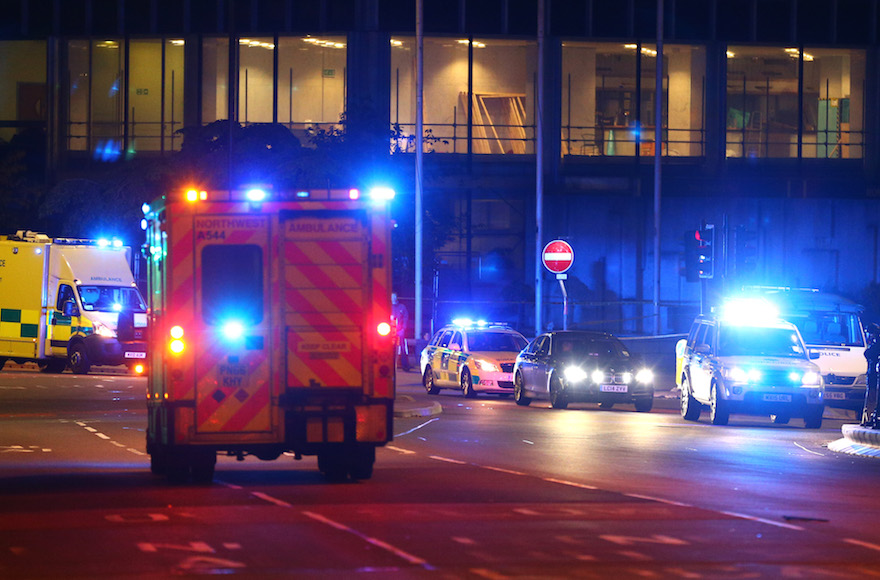 Emergency responders arriving at the Manchester Arena after a bomb attack on an Ariana Grande concert, May 23, 2017. (Dave Thompson/Getty Images)
Advertisement

(JTA) — A cousin of the Manchester bomber arrested last week in connection with the attack that left 22 dead posted anti-Semitic messages on Facebook.

Abderahman Forjani, 21, was arrested on May 23, hours after the suicide bombing by Salman Adedi outside the Manchester Arena at the end of a concert by American pop star Ariana Grande. Forjani’s brother Abdalla also was arrested.

The Times of London reported Monday that Abderahman Forjani had posted anti-Semitic messages and his account has since been taken down. Among the posts: “If only Hitler was still alive – these Jews would be burnt in chambers.”

Forjani further expressed animosity toward his hometown of Manchester.

It also was reported Monday that Adedi had prayed at the same Didsbury mosque in south Manchester that at least two British members of the Islamic State group who had traveled to Syria had attended.

Some 14 people have been arrested in Britain in connection with the bombing.