An Israeli’s alphabet combines Hebrew and Arabic to promote understanding 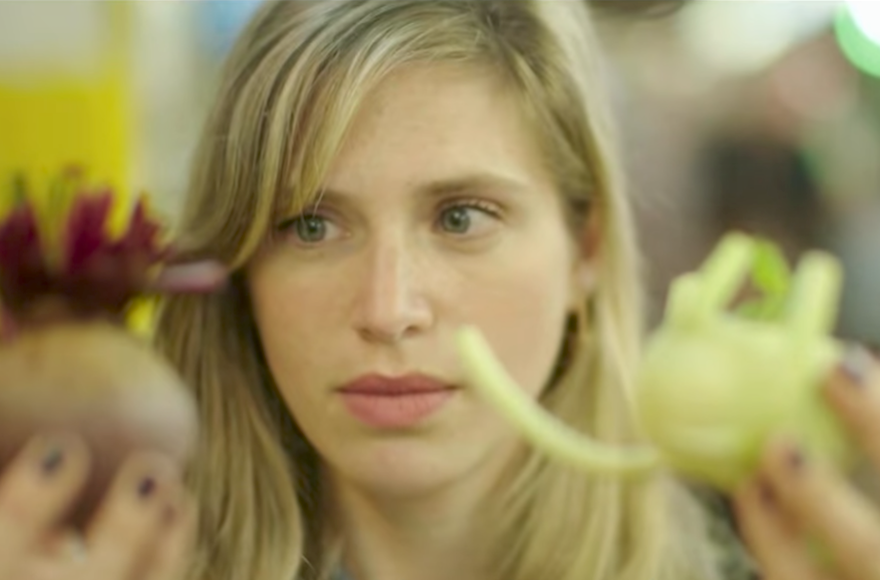 TEL AVIV (JTA) — Middle East peace may remain out of reach, but at least the Hebrew and Arabic languages have found a compromise.

Israeli typography designer Liron Lavi Turkenich has created a stylized writing system that merges the two ancient alphabets, allowing Hebrew and Arabic speakers to read the same words. Her hope is that Aravrit will promote coexistence in Israel and beyond.

“I believe Aravrit sends a message that we’re both here, and we might as well acknowledge each other,” Turkenich told JTA. “That applies to Jews and Arab Israelis, but also to Israel and the Palestinians and Israel and the Arab world.”

Israelis have been receptive. Over 1 million people have watched a Hebrew-language video introducing Aravrit since it was posted last week on Facebook by Kan, Israel’s new broadcasting authority. Dozens left positive comments. A version of the video with English subtitles was released Monday.

“I think maybe this explains the crazy success of the Hebrew video: We can do something caring for the other side just by reading, without having a solution,” Turkenich said.

Turkenich, 32, was inspired to create Aravrit by the road signs in Haifa, the mixed Jewish and Arab city where she was born and has lived most of her life. Although many of the signs feature Arabic — along with Hebrew and English — she realized that she had always ignored the lettering, which like most Israeli Jews she cannot read.

For her final undergraduate project, Turkenich set out to combine Hebrew and Arabic lettering in a way that would allow them to “live together,” as she put it. She started by revisiting the work of French ophthalmologist Louis Émile Javal, who in the late 19th century found that people can read pretty well using only the top half of Latin letters. With some experimenting, Turkenich discovered that the same is true of Arabic — and by happy coincidence, the opposite holds for Hebrew.

“In Hebrew, most of the identifying characteristics of letters’ forms are near the bottom part,” she said. “When I went to check Arabic, I crossed my fingers that they would be on the top half — and they were!”

Based on this insight, Turkenich combined each of the 22 letters in Hebrew with each of the 29 in Arabic to create an Aravrit alphabet with 638 characters. Vowels are used as needed for legibility — below the Hebrew letters and above the Arabic ones, per the languages’ respective rules. Turkenich tested the Hebrew elements on herself and her friends. For advice on the Arabic, she turned to Arab-Israeli commuters on her daily train ride from Haifa to Tel Aviv.

“Whenever I heard someone speaking Arabic, I would ask them if they had time to answer a few questions. They always said yes,” she recalled, noting that she now has Arab friends who help. 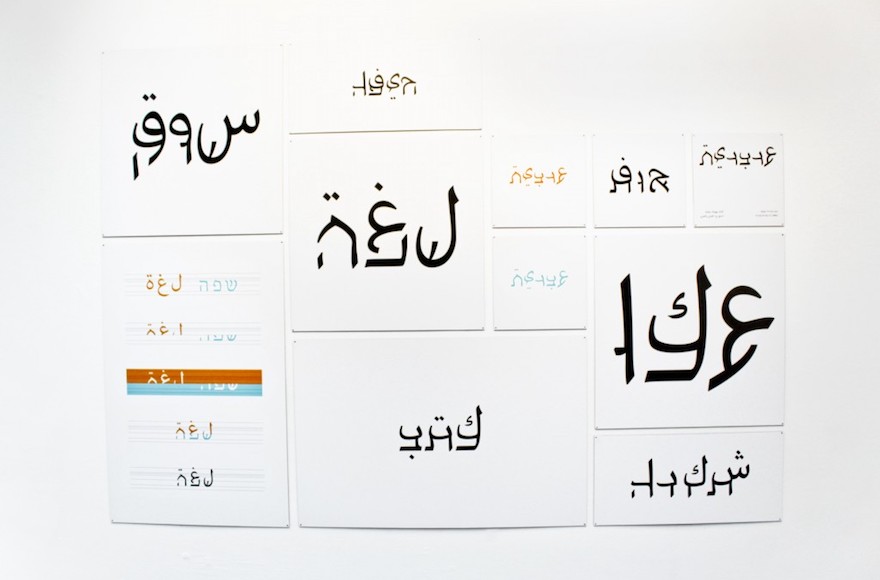 Since graduating in 2012 from Shenkar, a college of engineering, design and art in Ramat Gan, Turkenich has further developed Aravit into a writing system. She has incorporated alternative forms of letters in both languages — some Hebrew letters take on a different form at the end of words — and connected the Arabic elements in traditional cursive style. The changes have given her the flexibility to craft each word in a unique way, and she is working on writing down the rules.

Turkenich said she gets lots of requests to write Aravrit, including recently from the head of a small mostly Jewish city in Israel that she declined to name. She also teaches and gives lectures about her work in Israel and around the world. Aravrit is currently on exhibit at The Museum of Islamic and Near Eastern Cultures in Beersheba.

Language of course can be a political issue in the Jewish state. Hebrew and Arabic both have sacred roots, and are central to the identities at stake in the Arab-Israeli-Palestinian conflict. Earlier this month, Israeli ministers backed a bill that would constitutionally enshrine the country’s Jewish status and make Hebrew the only official language, demoting Arabic from that status — and, critics say, further marginalizing the 20 percent of Israelis who are Arab.

But Turkenich said her goal is to build on the languages, not subvert them. In Aravrit — itself a hybrid of the Hebrew words for Arabic and Hebrew — sentences follow the grammar rules of Arabic on top and Hebrew on the bottom, she noted, and the lettering retains the most prominent features of each script. A word like “peace,” for example, would read as “salaam” on top and “shalom” on bottom.

“Both Hebrew and Arabic have incredible histories. We should not erase them,” she said. “It’s the same as the political situation: We can’t start from scratch.” 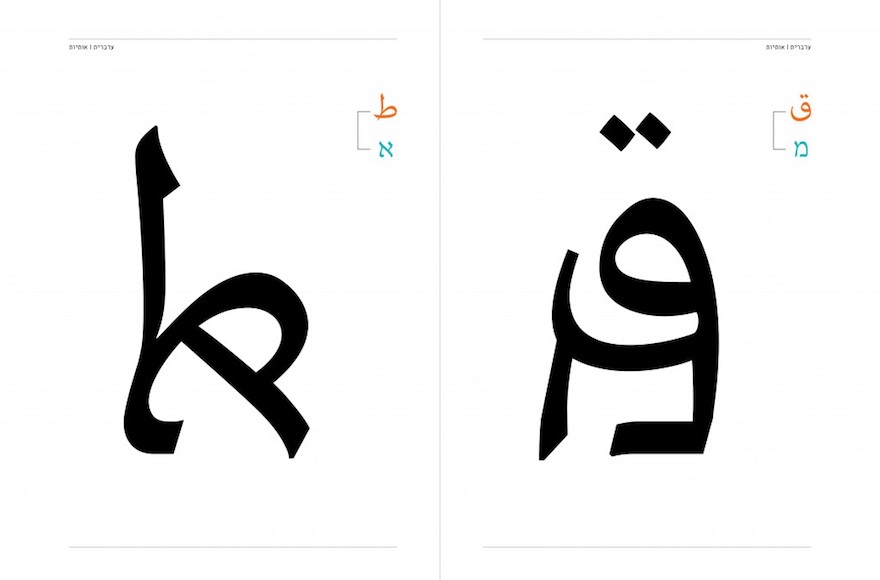 Arabs are not the only Israeli minority group Turkenich is interested in. While earning a master’s degree in typeface design from England’s University of Reading in 2015, she developed a typeface called Makeda, the name Ethiopians use for the Queen of Sheba, which works for Amharic, Hebrew and Latin letters. She hopes it will be used for Israeli government and legal documents relevant to the country’s 135,000 Ethiopian Jews.

“Makeda is a little less idealistic than Aravrit,” Turkenich said, laughing. “That was me growing up.”