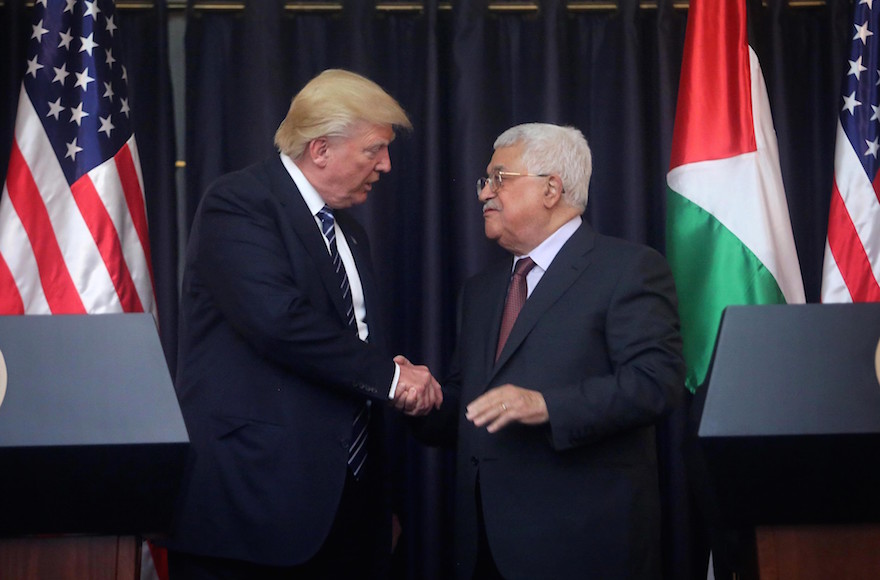 JERUSALEM (JTA) — Palestinian Authority President Mahmoud Abbas has appeared to confirm an Israeli report that U.S. President Donald Trump shouted at him during their meeting last month in Bethlehem.

The London-based pan-Arab newspaper Al Araby, or The New Arab, which has editions in both Arabic and English, reported on Wednesday that Abbas acknowledged the previous day during a meeting of the Palestine Liberation Organization’s executive committee that his meeting with Trump was “uncomfortable,” citing unnamed sources present at the meeting.

The sources told Al Araby that Trump showed video clips, which the Palestinians claim had been taken out of context, of Abbas admitting to inciting against Israel. “We incite and the Israelis incite,” he reportedly said.

“You have the CIA, ask them to examine the videos and to find out how they were taken or fabricated for the purpose of incriminating Palestinians,” Abbas reportedly told Trump.

The original report earlier this week by Israel’s Channel 2 reported that Trump yelled at Abbas and accused him of being involved in promoting incitement against Israel.

“You tricked me in DC! You talked there about your commitment to peace, but the Israelis showed me your involvement in incitement,” Trump reportedly yelled at Abbas during the May 23 meeting, making it difficult to get back to business during Trump’s whirlwind visit to the area.

Trump was referring to his meeting at the White House with Abbas on May 3, during which Trump called on Abbas to tamp down incitement, as well as to stop payments to the families of Palestinian terrorists in an effort to crack down on terrorism. Abbas, for his part, assured Trump that “we are raising our youth, our children, our grandchildren on a culture of peace.”

The Palestinian Authority also has denied the Channel 2 report.