Jared Kushner’s family is a legend in this Belarus town 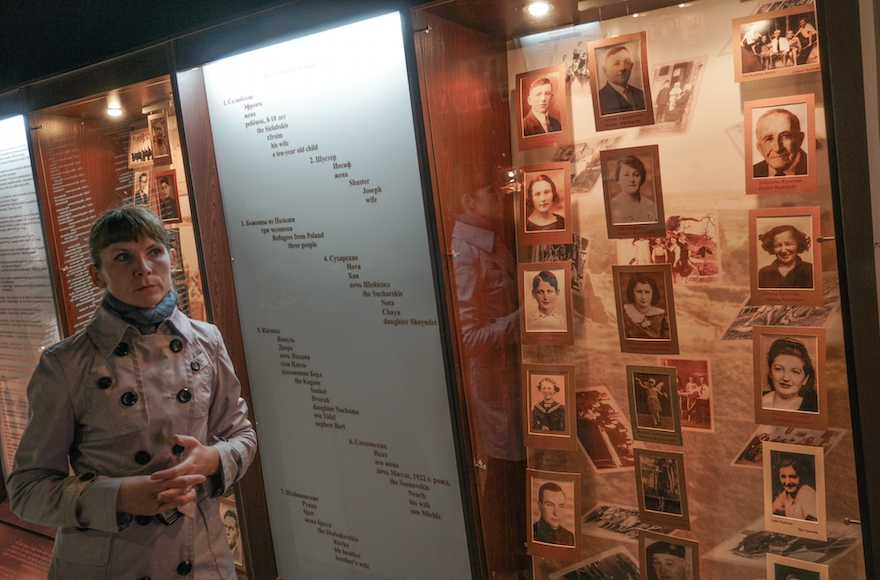 Marina Yarashuk, director of the Museum of Jewish Resistance of Novogrudak, at the museum on June 1, 2017. (Cnaan Liphshiz)
Advertisement

That’s generally the norm in the former Soviet Union. After all, Trump’s style goes over well in this part of the world — a survey conducted in November in Russia found that 45 percent of respondents said they would vote for Trump, compared to a four-percent approval rating for Hillary Clinton. Trump has promised to improve relations with Russia and has enjoyed high approval ratings throughout the region, with the exception of Ukraine and the Baltic countries.

But in Novogrudok — a picturesque city of 30,000 in western Belarus, about halfway between Minsk and Bialystok, Poland — Trump’s election is especially celebrated because it adds Kushner, the president’s son-in-law and key advisor, to the city’s short list of international success stories.

“Of course I am very proud that there is someone from Novogrudok in the White House,” said Boris Semyonov, a 57-year-old businessman, when asked about the subject last week in Lenin Square — a wide, clean space in the city center featuring a bust of the communist leader. “I am waiting for him to visit us.”

Yulia Silevskaya, a jurist in her twenties, said Kushner’s post “adds prestige” to her city.

Like many other locals, Semyonov and Silevskaya were familiar with Kushner’s name and his White House title; in addition to being married to Trump’s eldest daughter, Ivanka, Kushner is also a senior White House advisor.

But unlike many people — including residents of the United States — the citizens of Novogrudok had known about the Kushners long before the presidential election.

In Novogrudok, the Kushners are remembered and revered — not for their Trump connections or  their sprawling real estate empire, nor for the scandal that engulfed Kushner’s father, Charles, or the recent allegations that he proposed a back channel for communication between the Trump administration and Russia.

Rather, the Kushners are known for the daring escape from the local ghetto in one of the most famous acts of Jewish resistance to the Nazis.

The Kushners’ story features prominently at Novogrudok’s humble Museum of Jewish Resistance. The two-room museum, which opened in 2007, features pictures of Kushner’s paternal family — his great-grandfather, Zaidel; his wife, Hinda; their daughter, Rae; and her two siblings. The museum also displays the bunk beds where the family was forced to sleep when the Germans rounded up the local Jews into the Novogrudok ghetto.

In addition to Novogrudok’s wartime Jewish population of 6,000 — about a quarter of its total population — the Nazis crammed an additional 24,000 Jews from neighboring towns into a ghetto that was built around around a courthouse.

“The Kushners were a well-off family that, before the war, owned several shops in the center, was known to many people here,” said Marina Yarashuk, director of the Museum of History and Regional Studies in Novogrudok, which operates the Jewish museum. “So it’s natural that they should feature in the display.” 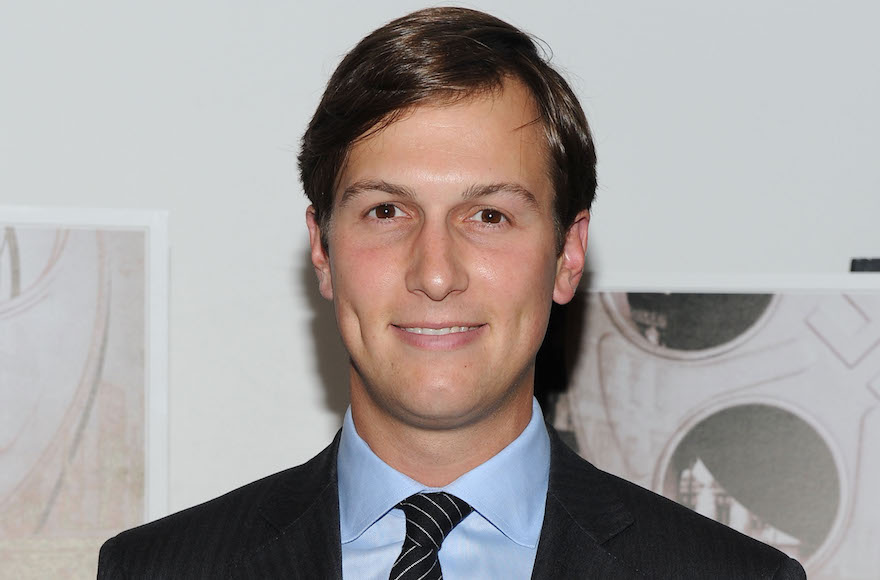 But what really makes the Kushners’ story stand out, Yarashuk added, is how they stuck together through a remarkable escape. Their plan seemed doomed to fail, but ultimately enabled them to survive the Holocaust and fight the Nazis alongside Jewish partisans.

“It’s an amazing story,” Yarashuk said. “I’m glad that it’s now coming out, even if it’s only because everyone is so interested in Jared Kushner.”

The Kushners’ unlikely survival centers upon the actions of Rae Kushner – Jared’s steel-willed paternal grandmother, who was 16 when the Germans placed her with her parents, sister and brother in the ghetto.

Having survived at least five “selections” for murder by machine gun — including the one in which her mother was killed — Rae joined her brother in leading a daring escape through a tunnel that was dug underneath the heavily-guarded ghetto, which was surrounded by electric wire. Rae recalled her role in the escape — which included removing dirt, as well as obtaining work tools and information from non-Jews who had entered the ghetto with the Germans’ permission — in a two-hour interview she gave in 1982 to the Kean College of New Jersey Holocaust Resource Center.

In what became one of Belarus’ best-known Holocaust stories, Rae helped lead prisoners through the weeks-in-the-making escape tunnel, which was the longest of its kind in Nazi-occupied Europe and facilitated the biggest escape through a tunnel by Jews.

The diggers — who concealed the earth they removed inside double walls and attics — led 350 men and women to freedom through the tunnel and into the woods. There, the survivors joined the Bielski partisans — a group of some 1,000 Jews named after the three brothers who led them, and whose bravery was the subject of the 2008 film “Defiance.”

As organizers, Rae and her brother, Honie, had earned a spot among the first to crawl out — what was considered a far safer position than at the end of the line. But she gave up her prime position to be with her 54-year-old father and 15-year-old sister. “If we live, we live together. If we die, we die together,” she recalled in the interview.

That decision may have saved her life, as well as that of her sister and her father, who was so weakened by months of malnutrition that he needed his daughters to carry him. Rae’s brother, who was among the first to emerge, disappeared without a trace. He was never seen again.

Today, the tunnel — which was dug inside a barrack and is now the site of the museum — is commemorated by a red-pebble path that traces its 225-yard trajectory all the way to the exit point, which is today a hole that borders a car repair shop. The shop’s walls feature commemorative posters with pictures from an archaeological excavation conducted there 10 years ago.

The attention devoted to the Kushners and their escape — as well as the general awareness of the story among Novogrudok’s locals — are typical of the success of Holocaust education in Belarus, according to Yuri Dorn, a former leader of Belarus’ Jewish community of 15,000 people.

Whereas revisionism is a growing problem among Belarus’ neighbors, with the exception of Russia, “the Holocaust is taught elaborately in schools in Belarus, where museums and memorials are set up and maintained,” he said.

President Alexander Lukashenko’s undemocratic rule and police-state policies may be condemned internationally, but “when it comes to Holocaust education and commemoration, Belarus is a world leader,” Dorn said.

This is partly because during World War II, Nazis killed some 2.23 million people in Belarus — a quarter of its population, including many non-Jews, Dorn said — a number too great to ignore.

Even so, the Kushners’ story is proof to Semyonov, the businessman, that the suffering of Jews was particularly intense. “The occupation in Belarus was a national tragedy,” he said. “But no one suffered like the Jews.”

In Rae’s two-hour interview, which was archived by the U.S. Holocaust Memorial Museum, she recalled how she forced a farmer to lead her family into the woods, where they lived for months on food given to them by locals until they were discovered by the Bielski partisans, who had heard about the escape and sought out survivors in nearby villages. The Kushners lived in the woods for a year, keeping watch for German troops and helping maintain the partisans’ camp until liberation in May, 1945.

Rae then took her family to a refugee camp in Czechoslovakia and, later, to Italy. She married her husband, Joseph Berkowitz, also from the Novogrudok area, in Budapest. Since he was from a poor family, he took her better-known name.

They emigrated to the United States in 1949 and settled in Brooklyn, where they raised four children, including Jared’s father, Charles. Joseph Kushner got a job as a construction worker, but by the time of his death in 1985, he had built a real-estate empire comprising more than 4,000 apartments.

Charles Kushner has visited Novogrudok several times, and even received a tour of the museum in 2014, Yarashuk said. Rae Kushner visited at least once before her death. The family donated some funds toward the construction of the Jewish resistance museum, according to Tamara Vershitskaya, the museum’s former director, who declined to provide details.

“Clearly it was a very moving experience for him, but it was also very emotional for us,” said Yarashuk.

She added: “Around here, the Kushners are a big deal, with or without Trump.”