Sears to pull ‘Free Palestine’ clothing from site amid complaints 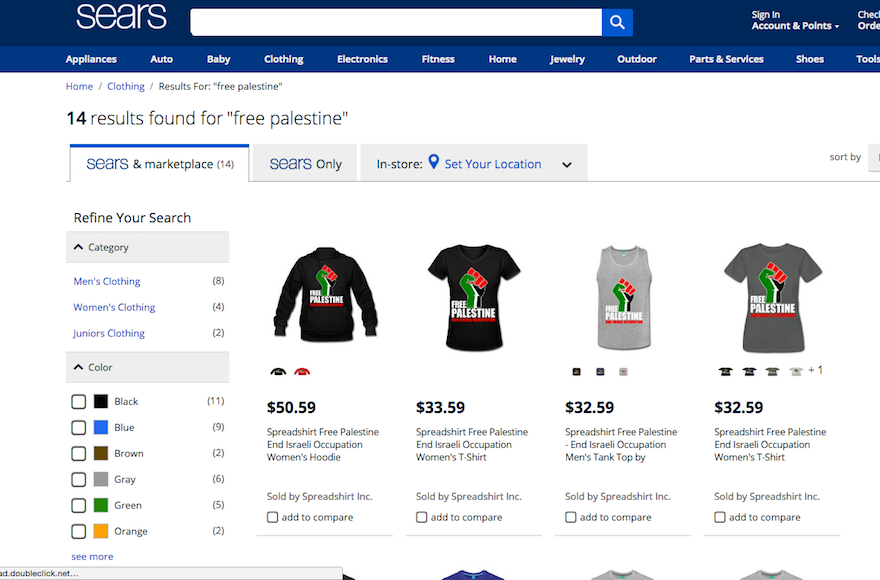 NEW YORK (JTA) — Sears says it will remove a line of clothing featuring the slogan “Free Palestine” from its website.

The designs included a clenched fist in the colors of the Palestinian flag and statements opposing the Israeli occupation.

According to a statement from a Sears spokesman, the apparel was pulled from the site based on feedback the company received.

“These items were being sold by a third-party seller via the Sears Marketplace,” said the statement, which was sent to JTA Tuesday afternoon. “Given the feedback we’ve received, they are being removed.”

The statement added that Sears felt it had been “unfairly singled out on this issue,” as similar items are available for purchase from other companies, such as Amazon and Walmart.

Amazon sells some of the exact same items from Spreadshirt, as well as a wide range of other pro-Palestinian merchandise.

The Sears statement notes that the company serves “a broad base of customers around the country and around the world,” and that it has 200 employees in Israel.