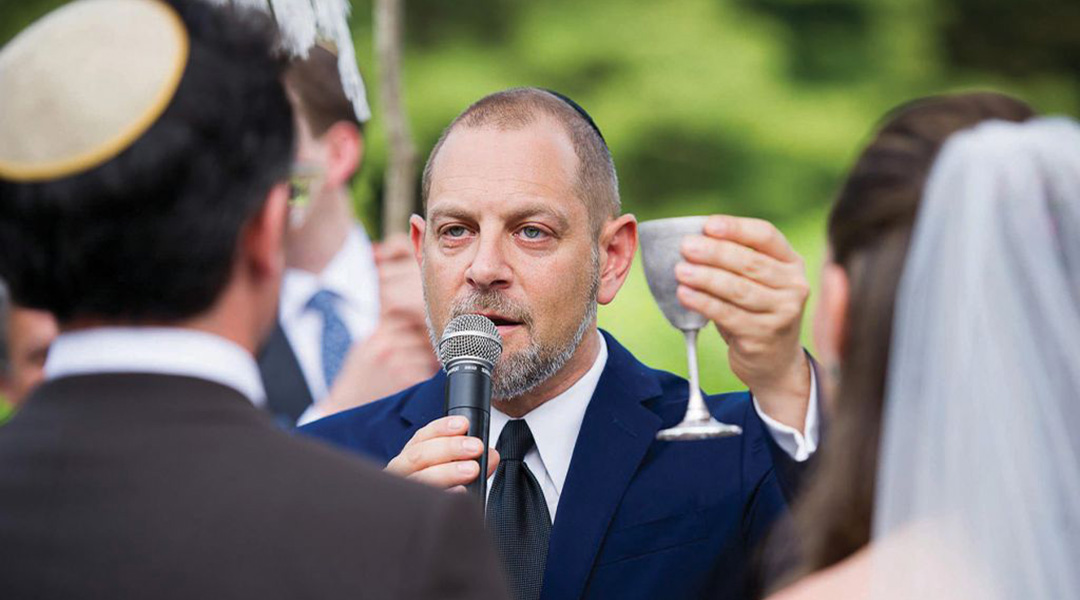 If you had to describe Amichai Lau-Lavie’s rationale for breaking ranks with the Conservative movement, as he is about to do, on its prohibition against rabbis performing intermarriages, it might be this: Love trumps tribe.

A popular and dynamic Israeli-born rabbi, educator, writer and performance artist, Rabbi Lau-Lavie, 48, was scheduled to announce his decision to his hip, downtown Lab/Shul NYC community this week and seek its support. He planned to explain how and why he came to believe that in an age of fluid and multiple identities, two people’s love for each other, be they straight or gay, and their shared interest in being part of “a Jewish spiritual community” outweighs the classification of the religion into which they were born.

Loath to continue rejecting mixed couples he knows and cares for and who ask him to officiate at their weddings, Rabbi Lau-Lavie said he kept wondering, “How do rabbis not become bouncers? Each story was unique. I couldn’t bear saying no.”

“If we don’t bring them in, we lose them. And we are not prepared to lose them and the Jewish future.”

He is not alone. As Rabbi Lau-Lavie plans to resign his membership from the Rabbinical Assembly, the rabbinic arm of the Conservative movement (which does not allow participation in mixed marriage ceremonies), another prominent member of the RA is prepared to do the same. Though not ready to go public, that rabbi explained, “if we don’t bring them in, we lose them. And we are not prepared to lose them and the Jewish future.”

Such rabbinic defections are rare, though some say the cracks in the facade may soon begin to widen as intermarriage becomes ever more pervasive in America, and liberal rabbis fear alienating their constituents.

The religious streams have taken different paths of countering or accepting the societal reality. Reform and Reconstructionist rabbis officiate at interfaith weddings, hoping a welcoming attitude will draw the couple closer to Judaism. The Orthodox and Conservative movements have held firm in opposition, asserting that a Jewish marriage is between two Jews and that rabbis are bound to follow the demands of traditional Jewish law.

As Orthodoxy moves to the right, the Conservative movement is torn between resistance and seeking ways to make accommodations.

But as Orthodoxy moves to the right, the Conservative movement is torn between resistance and seeking ways to make accommodations.

Rabbi Julie Schonfeld, executive director of the RA, said she knows of fewer than a handful of rabbis who have resigned from or been expelled from her organization due to officiating at intermarriages. While emphasizing that Conservative Judaism is a halachic movement, she acknowledges that intermarriage is a serious concern and that turning away couples — often including a young man or woman the rabbi has known since youth — is “a source of great pain to our members, and we are committed to finding ways to show we care.”

She said there is an increased effort to draw young people “into Jewish life and make sure they feel welcome at every stage,” citing an emphasis on outreach, strengthening Jewish marriages and making conversions more readily available.

Statistics show that while the intermarriage rate since 2000 for children raised in Reform homes is 82 percent, for Conservative Jews during that time it is 39 percent.

The “pop-up” Lab/Shul that Rabbi Lau-Lavie founded four years ago — an outgrowth of the Storahtelling ritual theater group he launched in 1998 — describes itself as an “everybody-friendly, artist-driven, God-optional experimental community for sacred Jewish gatherings in NYC, reaching the world.” So it’s not surprising that many in that growing, eclectic community of hundreds are Jews in relationships with non-Jews. And they want him to bless their union and stay connected in some way to Jewish life.

At a recent salon with about 20 people at the downtown home of a Lab/Shul couple, and in a subsequent interview at The Jewish Week, Rabbi Lau-Lavie spoke of how, on a personal level, and through a year of intense study of Jewish texts and in conversations with rabbis and congregants, he found a path he believes will enable him to officiate at the marriage of a Jew and non-Jew while adhering to a minority strain of Jewish tradition.

“One of my fears is that Jewish life will be reduced. I don’t want to open the floodgates to an ‘anything goes’ position.” – Lau-Lavie

“The firsthand encounter with the pain of rejection and its consequences to the couple, to me, and to our community convinced me of the need for an urgent solution,” he wrote in the introduction to the 50-page proposal he will make public this week, hoping to spark an ongoing communal conversation.

Rabbi Lau-Lavie knows his decision will be criticized by the establishment of the Conservative movement, which sees such a move as weakening its principled stand against intermarriage. And that upsets him, in part because he doesn’t disagree with the movement’s concerns.

“One of my fears is that Jewish life will be reduced” by weakening the community. “I don’t want to open the floodgates to an ‘anything goes’ position,” he said, adding that he also doesn’t want to be taken less seriously by rabbinic colleagues he respects deeply.

Rabbi Lau-Lavie is the scion of a famous Israeli family. His father, Naphtali Lau-Lavi, was Israeli consul general in New York, and the older brother of former Israeli Ashkenazi Chief Rabbi Israel Meir Lau. Amichai’s older brother, Binyamin, is a leading Modern Orthodox rabbi in Jerusalem, and their cousin, David, is the current Ashkenazi chief rabbi of Israel.

Amichai has served as a kind of rabbinic troubadour for almost two decades in New York, first through Storahtelling, and more recently through Lab/Shul, though he was ordained at the Jewish Theological Seminary only last year. He spoke of his great respect for the Conservative movement as it strives to balance modernity and tradition. It was the practical and theological explorations within the movement, leading it a decade ago to allow gay marriages and the hiring of gay clergy, that made him, as a gay man, feel fully accepted religiously, he said.

“I’m so grateful to the philosophical premise of Conservative Judaism that saved me growing up, and I’m committed to that narrative,” he said.

Lau-Lavie’s proposal calls for “the restoration of the ger toshav category, with necessary revisions, for the American Jewish community of the 21st century.”

The rabbi prefers the approach of those in the movement who, in dealing with evolving realities, found an inclusive response to the gay issue and other challenges to tradition over the years.

His research began last year with his study of the biblical injunction against marrying idol worshippers, specifically from seven ancient tribes, viewed as a threat to Jewish survival. Rabbi Lau-Lavie reasons that we no longer live among idolaters, and that the current prohibition against intermarriage is rabbinic, not biblical.

In exploring historical and halachic models for a middle ground between rejection and full acceptance of those in relationships with Jewish partners, he came across rabbinic sources identifying just such an intermediate category of non-Jews who affiliated themselves with a Jewish community but did not convert. He focused on the rabbinic category of ger toshav, or “resident alien,” and notes that while traditional Jewish sources don’t condone intermarriage, they suggest that there is ground for a more nuanced and open approach to the subject. His proposal calls for “the restoration of the ger toshav category, with necessary revisions, for the American Jewish community of the 21st century.”

Rabbi Lau-Lavie would like the non-Jewish partner to be known as a “Joy,” as in “a Jew who’s also a goy.”

In practical terms, that would mean a new form of wedding ceremony, incorporating certain Jewish rituals, preceded and followed by a commitment by the couple to study and engage in Jewish life. Rabbi Lau-Lavie would like the non-Jewish partner to be known as a “Joy,” as in “a Jew who’s also a goy,” though he acknowledges it may be viewed as too cute, if not offensive, a title by others.

Perception Of Giving In

Steven Bayme, national director of contemporary Jewish life at the American Jewish Committee, said he empathized with Rabbi Lau-Lavie’s effort and motives to bring people closer to Jewish life. But “the real challenge to the movement is whether the center will hold,” he said, noting that Conservative Judaism has been “unambiguous” in rejecting intermarriage officiation while encouraging conversion.

“Can you prefer and encourage in-marriage while allowing for rabbis to officiate at mixed marriages?” Bayme wondered. And there is the issue of public perception. Even if the marriages are performed “b’dieved,” he said, using a Talmudic term meaning “under duress, when no other option appears available,” they could be widely seen as being done “l’chatchilla,” a Talmudic term meaning “optimally, or as a preference.”

Wolpe: While having a rabbi officiate at an intermarriage “is intended to represent acceptance, I fear that ultimately it represents abdication.”

Rabbi David Wolpe, a leading voice of the Conservative movement (and Jewish Week columnist), made a similar point in noting that while having a rabbi officiate at an intermarriage “is intended to represent acceptance, I fear that ultimately it represents abdication.”

Rabbi Lau-Lavie made it clear that he is not asking the Rabbinical Assembly to change its rules. He speaks of the group with respect, and Rabbi Schonfeld, in turn, says she wishes him well. He is convinced the tide has shifted and organizations like the RA will have to “catch up” in accommodating non-Jewish partners. He says he is doing what he thinks is best for his own community, and he plans to spend the next five years evaluating the impact of his approach.

“I want to meet couples halfway, meet them where they are, with warmth, to see if inviting them in makes a difference” in their lives, and in the community’s, he said. “I want them to join out of love, not fear, and yes, many will not follow through. It’s a risk.”

But it’s one he feels the need to take. “I hope my research helps create a conversation,” he said.

There’s little doubt of that. The question is whether it will lead to a Jewish community diluted — or strengthened — by those on its periphery.