This 136-year-old Jewish agency for refugees has a new mission in the Trump era: Fighting back 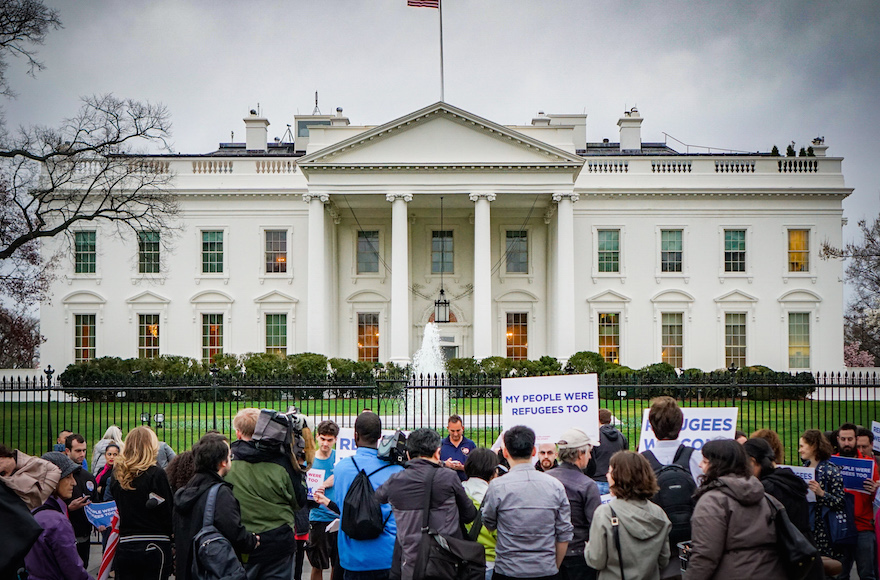 Activists gathering in front of the White House to share stories of their family members who were refugees or immigrants, March 1, 2017. (Ted Eytan)
Advertisement

Hetfield is the president and CEO of HIAS, an organization that resettles refugees in the United States. A week into his presidency, Trump issued an executive order barring refugees from entering the country, leaving Hetfield’s group bereft. Its supporters joined the protests that weekend at airports across the country.

But with HIAS unable to pursue its core mission, Hetfield wasn’t sure what the next step might be.

“All we can do is continue to make noise,” he told JTA that Sunday.

Nearly five months later, that noise has only gotten louder. More than a century old, HIAS has seen its activist profile rise higher this year than perhaps at any point in its history. It’s brought thousands of people to demonstrate in the streets and organized hundreds of synagogues to take action. And it’s about to stand before the Supreme Court as a plaintiff in a suit challenging the second version of Trump’s ban, which two judges blocked in March.

“The problem we have now is [American Jewish volunteers] want to do much more in terms of servicing refugees, welcoming refugees than we can give them, because the refugees are simply not arriving in the numbers they should be,” Hetfield said last week. “It’s really important that American Jews have our back because our biggest partner is the United States government, and that’s going to be changing over time to our biggest partner being the American Jewish community.”

The activism is a change of pace for a group accustomed to navigating bureaucracy and staying apolitical. Founded in the 1880s, the Hebrew Immigrant Aid Society was a shelter and resource for newly arrived Jewish immigrants. During and after World War I and the Holocaust, it worked to resettle waves of Jewish refugees. And it took a leading role in the movement to free and resettle Soviet Jewry.

As the waves of Jewish immigration slowed to a trickle in the 2000s, HIAS began resettling non-Jewish refugees. Now it is one of nine agencies tasked with resettling refugees in the United States.

Trump’s vociferous opposition to admitting Syrian refugees has thrust the group into a paradox: Its officials portray themselves as reluctant activists who would prefer to remain outside of the partisan fray — working with the government, not against it. But for all intents and purposes, HIAS has joined the front lines of what anti-Trump protesters call “the Resistance.”

“That’s the most troubling thing — refugees were really a bipartisan issue,” Hetfield said. “Some people say HIAS is a liberal agency or progressive Jewish agency. We’re really not. Our whole focus has been refugees, and refugees are not a partisan issue. It really became politicized over the past couple of years.”

The group’s anti-Trump activity has had the most impact in court. HIAS is one of nine plaintiffs in the federal lawsuit against Trump’s second travel ban, which the Supreme Court is set to rule on this month. The suit claims the focus on Muslim countries violates the Constitution’s prohibition on preferring one religion over another, and asks for an injunction against the ban because it would cause HIAS to lose revenue and possibly cut staff. (To move forward with the lawsuits, plaintiffs have to prove harm, or “standing.”) 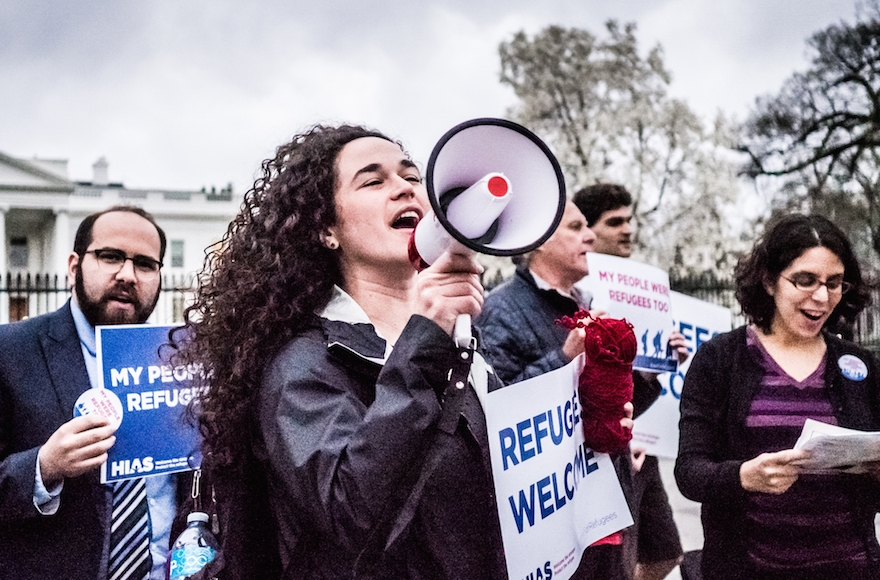 A Maryland District Court judge, Theodore Chuang, granted the injunction, and it was upheld by an appeals court. The Supreme Court will probably rule on the injunction by June 26. But Chuang’s federal court still must rule on the legality of the ban itself, so the legal road for HIAS remains long.

“Usually litigation takes years,” said Melanie Nezer, the senior vice president of public affairs for HIAS. “This has all happened so fast. I don’t think anyone predicted the outcome of this, but we felt pretty strongly that we had good, solid arguments against the Muslim and refugee ban.

“It’s not over yet. We’re really still at the preliminary stages of litigation.”

While it fights the administration in court, HIAS has capitalized on Trump’s opposition to refugees to mobilize a growing base of Jewish-American supporters. HIAS began building that base in 2014, when its leaders realized that most American Jews were unaware of its work since the Soviet Jewry movement faded 25 years ago following the breakup of the Soviet Union.

The group began a Welcome Campaign for synagogues that wanted to assist refugees — from a few that have headed hands-on resettlement efforts to others that have committed to advocacy and education about refugee issues. HIAS also began organizing activists to help lobby for its goals.

As many social justice causes have experienced, the Trump presidency has turbocharged the work. Before the election, the Welcome Campaign included just over 200 synagogues. Eight months later the number is up to 360. On a national Day of Action two weeks after the initial refugee ban, HIAS mobilized protests in 20 cities, including 1,000 people opposite the Statue of Liberty in New York City and 600 in Washington, D.C.

An organizing meeting for young professionals in Washington on Feb. 6 was expected to draw 30 people; 500 showed up. HIAS is now organizing them to advocate for its issues and to volunteer with refugees.

And Hetfield said the group has seen a “significant rise” recently in private donations. In 2015, the group’s operating expenses totaled $41 million. This year its budget is $55 million.

Over the weekend following Trump’s initial refugee ban, HIAS raised more than $100,000 and garnered 1,800 new donors. In 2016, the group exceeded its fundraising goal by 25 percent.

“The silver lining of Trump coming into the presidency has been the uptick in a sense of urgency and an uptick in activism,” said Rabbi Jennie Rosenn, vice president of community engagement for HIAS. “There are rabbis and other community leaders who were more reluctant before to take stands or say things that were quote-unquote political, who after the election have been less cautious.”

HIAS is championing an issue of particular consensus in the usually fractious American Jewish community. The Jewish organizational world, with the Zionist Organization of America among the few exceptions, opposed the refugee ban nearly unanimously. (ZOA included HIAS in what it called an “unholy consortium of Jewish and anti-Israel groups” ignoring the potential of ISIS sympathizers among Syrian refugees.)

But Rosenn said HIAS has still encountered opposition to refugees, especially in communities she called “inward looking,” based on concerns about security threats from radical Islam. The group has attempted to assuage those concerns by describing the vetting and resettlement process for refugees and drawing a parallel between today’s refugee crisis and the plight of European Jewry in the 1930s.

“As we explain the very rigorous vetting processes that are already in place, that goes a long way in reassuring people,” Rosenn said, as does “reminding people that throughout history, Americans have been fearful of refugees, and reminding folks that people didn’t want to welcome Jews.”

The group’s public profile is a shift from its strategy during previous refugee crises, said American Jewish historian Hasia Diner. As Jews in the 1930s faced rising anti-Semitic persecution in Europe and restrictive immigration laws in the United States, HIAS lobbied federal and local governments and published pro-refugee pieces in the media. The efforts secured some refugees a place in the country, but were of little avail to many others who could not get visas from an unsympathetic government.

Back then, said Diner, the Jewish community was largely made up of working-class immigrants. And decades before the civil rights movement, public protest was not in vogue. Now, she said, following the massive Women’s March in January and a range of other public actions, HIAS would be remiss not to take to the streets.

“It’s a different America we’re talking about,” said Diner, a professor at New York University. “I’d be shocked if they weren’t engaging in that kind of protest because that’s become a civic norm.”

HIAS officials hope the era of opposition won’t last long and at some point the group can again focus on finding refugees food and shelter. Whenever that happens, HIAS hopes the Jews that have come out to protest will still be behind it.

“This is not something that’s going away,” Nezer said. “The refugee crisis is not going away. Millions of people who hadn’t thought about it before are now aware of it and want to help. I can’t imagine that will stop.”