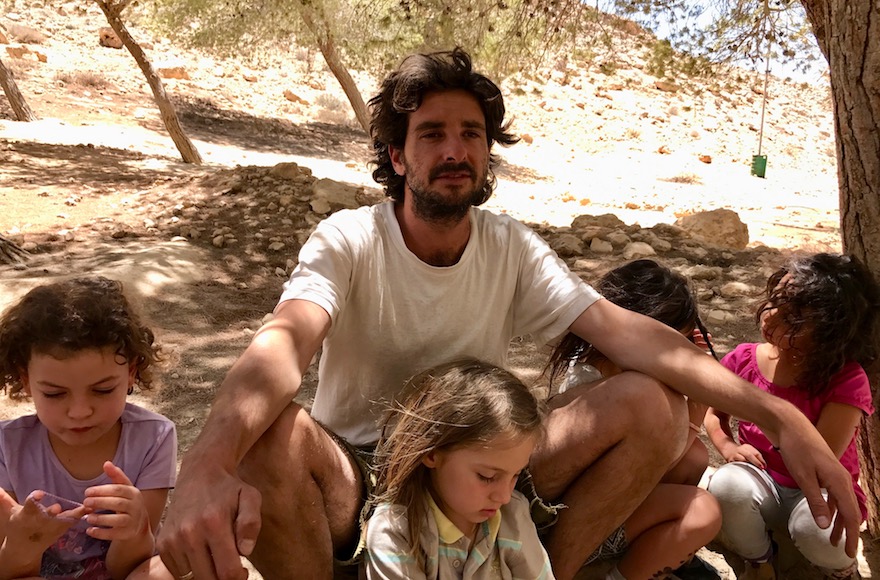 MITZPE RAMON, Israel (JTA) – It sounds like a Jewish mother’s nightmare: a preschool class held outdoors in the desert.

But parents in this remote Israeli town drop off their children at Gan Keshet every weekday during the school year, setting them free to cook on a campfire, whittle sticks with switchblades and search for scorpions. Class goes on rain (rare) or shine (intense).

“The kids meet real life when they come here,” said Ron Meltzer, the school’s soft-spoken principal and visionary. “Spending time in nature — without an iPhone or computer — gives them many important gifts. I think it’s a solution for a major problem in our culture today.”

Gan Keshet, which means “rainbow kindergarten” in Hebrew, is the country’s first “forest kindergarten” – and it’s public. Thanks to local media coverage and word of mouth, parents have lined up to enroll their children and educators across Israel have sought to emulate the model.

On Tuesday, school started as usual at 7:30 a.m. Under loose supervision by Meltzer and two other teachers, the children, aged 3 to 6, played in a grove of pine trees alongside a dusty one-lane road on the edge of town. A group of boys carved sticks to be fashioned into bows and arrows, and a girl built a rope ladder between the branches of a tree. Others sat on picnic mats drawing pictures, reading books and stacking wooden building blocks. 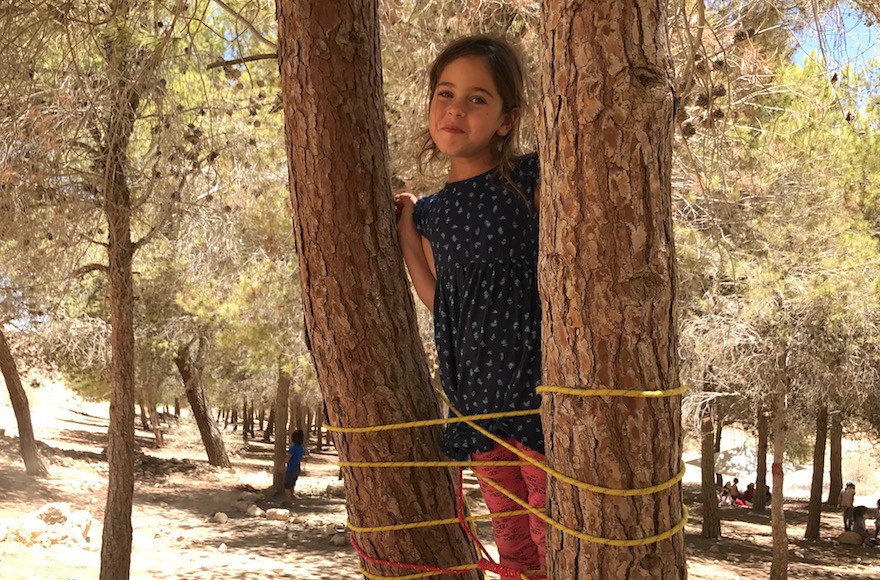 A girl standing on the ladder she built in Mitzpe Ramon, Israel, June 13, 2017. (Andrew Tobin)

Despite the apparent lack of boundaries, rituals and rules provide structure. In the rising heat, the children stayed within a mostly shady football field-sized area marked off on each of four sides by trees and rocks that all of them could readily identify.

At about 9:30 a.m., after orderly handwashing and water-drinking ceremonies, everyone gathered around a large ring of stones for “morning circle.” They sang songs and listened to a story ahead of breakfast — vegetables wrapped in the pita.

When the story, about a friendly giant, was interrupted by the announcement of an earthquake drill over a nearby elementary school’s loudspeakers, Meltzer reassured the children that outside would be the safest place to be if the earth started shaking.

As morning circle wrapped at 10 a.m., a group of about 30 teaching instructors from the Negev region showed up in a bus to observe the preschool. The idea was to incorporate some of its principles in their own classrooms. Meltzer, shaggy haired in shorts and sandals, gave an overview and fielded questions. His dog, Laurie, lay nearby in the shade.

Hundreds of educators, students and parents have come to Gan Keshet this year alone. The school has become somewhat famous in Israel since the Channel 1 TV station ran a news story about it in April. The video has been viewed 1 million times on Facebook. 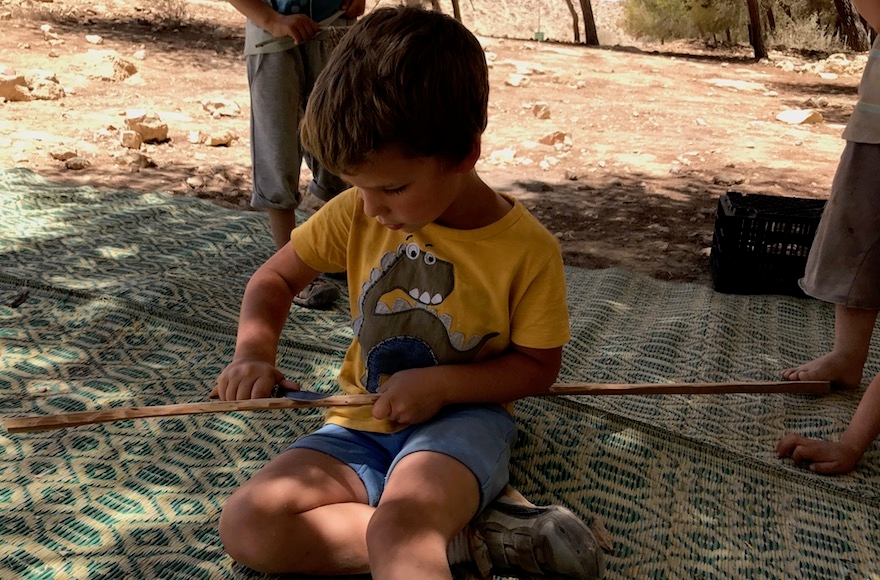 A boy carving a stick with a switchblade in Mitzpe Ramon, Israel, June 13, 2017. (Andrew Tobin)

Yoav Donyets, Mitzpe Ramon’s education director and a committed advocate for Gan Keshet, said a half-dozen families had moved to the city to enroll their children in the school. For the first time this term, Donyets said, he could not accommodate all the requests for new students. And he expected the demand to be higher next year.

“It’s crazy a kindergarten in Mitzpe Ramon is so interesting for people,” Donyets said in an interview at his office. “It’s something where people say if they can do it down there, of course we can also.”

The visiting instructors agreed that parents at their schools wanted Gan Keshet-like programming. A few educators from rural schools said they had started taking their children outside once or twice a week to learn to live in nature for at least a few hours.

But Mitzpe Ramon is a fairly remote town hugging the lip of the vast, crater-like Makhtesh Ramon, 50 miles from the major southern city of Beersheba. Most of the visiting educators come from Beersheba, and they described challenges adapting the model to an urban environment.

Idit Harel, a teacher and instructor for 18 preschools in the city, said she doubted she would find support to do more than visit a nearby park.

“Our parents are stressed that the kids will come home with sand in their shoes or in their clothes or in their hair. I get telephone calls saying they want their children clean,” she said. “There are also lots of concerns about security.” 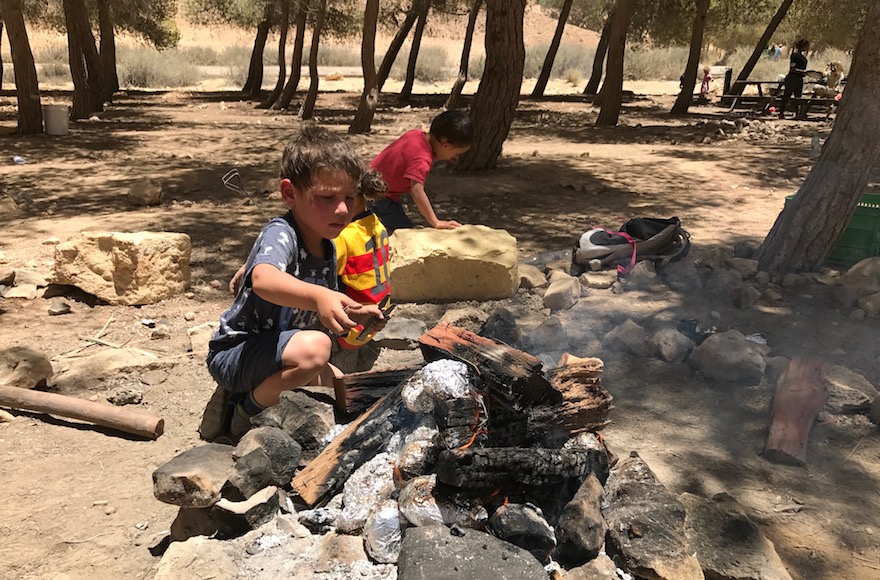 Meanwhile, the children largely ignored the visiting instructors. A group of boys took a break from wrestling under the tent to show off their technique for checking under rocks for scorpions or centipedes.

Carmi, a 6-year-old girl covered head to toe in dirt, offered a tour of the restroom, a clearing at the edge of the kindergarten’s designated area, and explained how to dig a hole to “do a kaki” and then mark it with a stick.

“You put it here, so no one else goes in the same spot,” she said, giggling.

Meirav Perry, a teacher at a local elementary school, brought her first-grade class to visit Gan Keshet on Tuesday afternoon, as she does every week. She has seen the results of its approach: Two of her daughters have gone through the kindergarten, and her youngest daughter will start in a couple years.

“The kids don’t always love it at first. Like their parents, they think they would prefer to be inside in the air conditioning,” she said. “But look, they are very happy and independent. They know how to play alone. They don’t need people all the time to tell them what to do. They are creative, and they are strong.”

Meltzer, 33, moved to Mitzpe Ramon in 2011. Having previously lived with cave dwellers in southern Spain and in a yurt in a village in northern Israel, he and his wife were looking for a simple way of life close to nature. They and their year-and-a-half-old daughter still sleep in a yurt attached to their house. 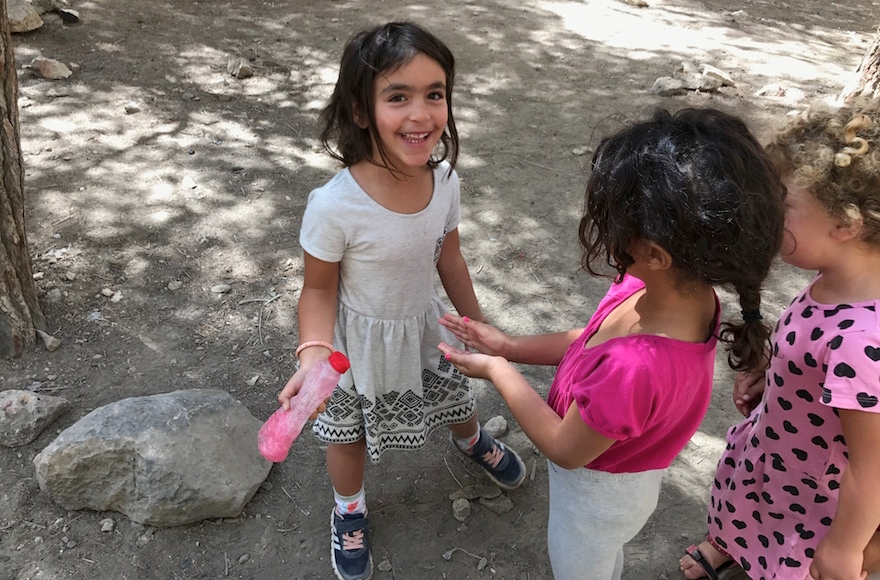 Despite having no formal training as an educator, Meltzer was soon hired as a teacher at Gan Keshet. The next school year he took over as the principal and began moving classes outdoors. There was some pushback from parents and local officials, especially during the winter months, but he quickly won allies like Donyets and Perry.

By the end of the 2012-13 school year, Meltzer and his allies convinced Israel’s Education Ministry to designate Gan Keshet an “experimental school” and let him move class entirely outdoors. In 2015, the ministry upgraded Gan Keshet to a “model school,” meaning it would support other schools in adopting its approach.

A ministry spokeswoman said “a lot of local municipalities” were expressing interest in forest kindergartens and that a new experimental school was approved this term in northern Israel. Donyets and Meltzer said several private forest kindergartens opened this school year, and more public pilots were planned for next year.

Meltzer has twice visited forest kindergartens in Germany to get inspiration and guidance. Germany has more than 1,500 such schools, one of which was profiled recently in The New York Times. Forest kindergartens were first developed in Scandinavia and now exist in the United States, Britain, Australia, Japan and South Korea.

As the Times noted, a study by a German doctoral student found that graduates of that country’s forest kindergartens had a “clear advantage” over their peers who complete regular kindergartens, outperforming them in cognitive and physical ability and in creativity and social development.

Forest kindergartens may have an emotional appeal for some Israelis. Living close to the land is a central tenet of Zionism, the country’s founding ideology. But Meltzer said he takes a wider view.

“I never meant to be a teacher. I just knew that I wanted to take people from Western society and connect them to nature,” said Meltzer, who is studying education part-time at a local college. “Now I see potential to have a big influence on Israel and the world by helping children build a strong foundation, physically and emotionally.”

At 1:30 p.m, with the instructors on the bus back to Beersheba, Meltzer gathered the children for “afternoon circle,” where they ate roasted potatoes and freshly sliced fruit. About a third went home with their parents, and the rest made the 30-minute walk to their schoolhouse in central Mitzpe Ramon, where they stayed until 4. Almost everyone spent the final hours in the backyard, playing in the dirt.