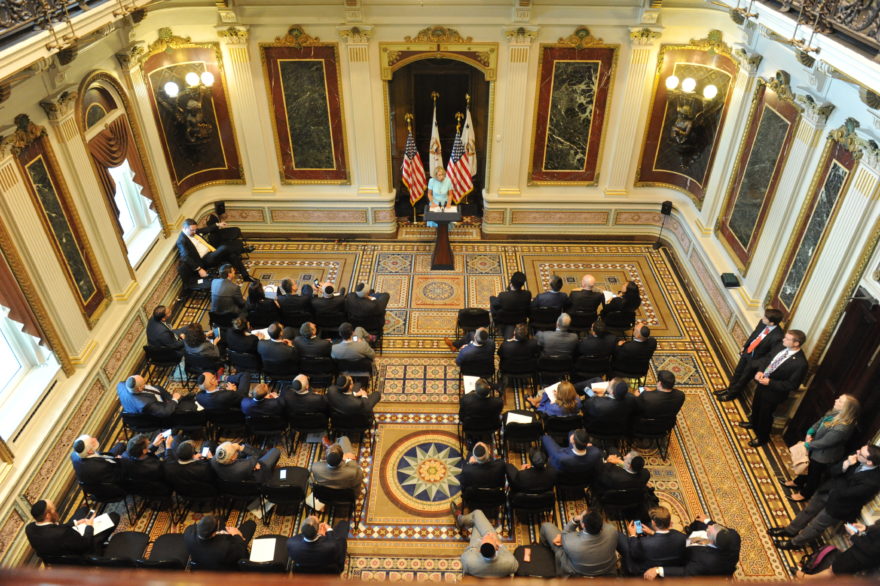 WASHINGTON (JTA) — Top Senate Democrats said they were closer to signing on to a Republican-backed bill that would slash aid to the Palestinian Authority if it did not stop subsidizing Palestinians jailed for attacks on Israel.

Sen. Charles Schumer, D-N.Y., the minority leader in the Senate, told attendants at the Orthodox Union’s annual Washington action day on Thursday that he would support the Taylor Force Act or legislation similar to it if the Trump administration is unable to get the Palestinian Authority to stop the payments.

“Abbas has to stop making payments to terrorists and their families, and all elected officials should call them out,” Schumer said.

“We’re going to find a way to pass the Taylor Force Act,” Cardin said, suggesting that he wanted changes to the bill before he could fully endorse it. The measure was named for the American killed in a 2016 stabbing attack in Tel Aviv.

Support by Senate Democrats, who mostly balked at the bill when it was introduced earlier this year, would be critical to preventing a filibuster from killing it. Any version passed by the Senate would likely succeed in the U.S. House of Representatives, which also has a Republican majority.

The United States now gives the Palestinian Authority about $500,000 million in annual aid. The bill, which was introduced by Sens. Ted Cruz, R-Texas, and Lindsey Graham, R-S.C., would only leave the portion for security assistance — about $60 million in 2013. Cruz also attended the Orthodox Union event.

Democrats have been reluctant to cut aid to the Palestinians in part because they have heeded Israeli governments who have argued quietly that support for the Palestinian Authority is critical to keeping the West Bank quiet.

The Trump administration, however, has pushed the issue to the forefront, with President Donald Trump demanding an end to the payments as he attempts to revive Israeli-Palestinian peace talks. Secretary of State Rex Tillerson earlier this week said that the Palestinian Authority was ready to cut the payments, only to be contradicted within a day by Israeli and Palestinian officials.

Notably, the American Israel Public Affairs Committee, which previously did not have a position on the bill, was also edging closer to embracing it.

“We are encouraged by the efforts in Congress to reach a bipartisan agreement that will ensure passage of the Taylor Force legislation,” its spokesman, Marshall Wittmann, said in an email to JTA. “AIPAC has pressed to end payments to terrorists and their families for many years. Congress and the Administration must increase the pressure on the Palestinian authority to end these abhorrent payments.”

Lobbying for the Taylor Force Act was one of three legislative agendas for the Orthodox Union leaders and activists. The other items were expanding “school choice,” a term conservatives use for diverting some federal funds to private and religious schools, and backing for security funds for nonprofits.

In addition to their congressional meetings, the delegations also met with Education Secretary Betsy DeVos; Jason Greenblatt, who is leading Trump’s efforts to create the conditions to restart peace talks; and Sebastian Gorka, a member of Trump’s national security team.

“Coming to Washington is a very visible reminder of our commitment to those we represent and our appreciation for this country’s leaders who work tirelessly on behalf of the Jewish people and Israel,” O.U. President Mark Bane said in a statement.