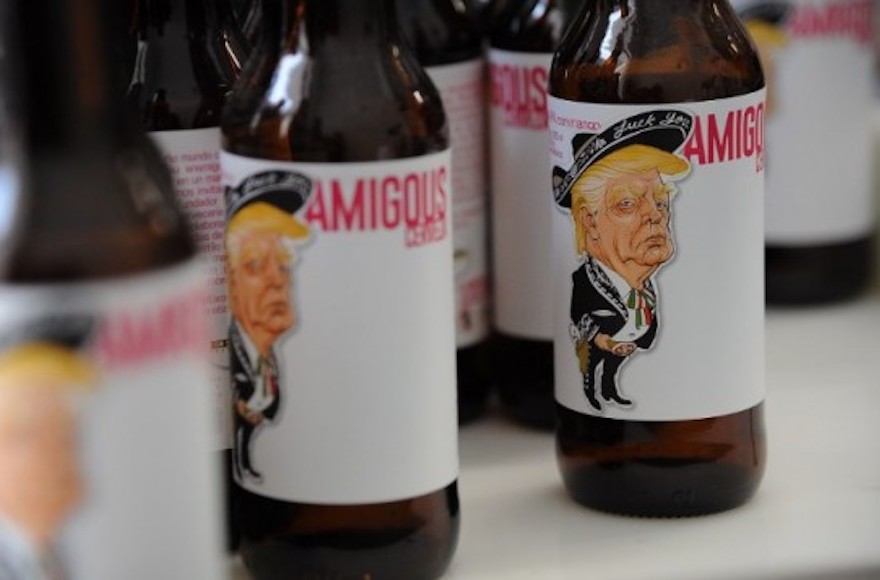 The label of the new Amigous Cerveza craft beer shows Trump dressed in traditional mariachi band attire, wearing a sombrero hat and a swastika belt buckle, Reuters first reported. The beer is brewed in Mexico and the United States.

Launched in May, the beer — which misspells “amigo” to poke fun at a bad American pronunciation of the Spanish word for friend — surprised its creators. The original batch of 1,200 bottles and 400 liters on tap sold out in the very first week.

Trump has sparked outrage in Mexico with his campaign vow to build a wall along the southern U.S. border to keep out illegal immigrants and drugs, and to make Mexico pay for the construction. He also called Mexican migrants”rapists” and “criminals.” In response, Mexican President Enrique Pena Nieto compared Trump’s rhetoric to that of Adolf Hitler and Benito Mussolini.

Earlier this month, the mayor of Mexico City praised his country’s Sephardic heritage during the opening of the global biennial Erensya summit, a three-day conference that gathered Sephardi Jews from more than 20 countries in Latin America to discuss their culture and tradition.

In May, the Anti-Defamation League announced it will train the staff of Mexico’s 50 consulates in the United States on how to assist nationals who are victims of attacks and harassment.