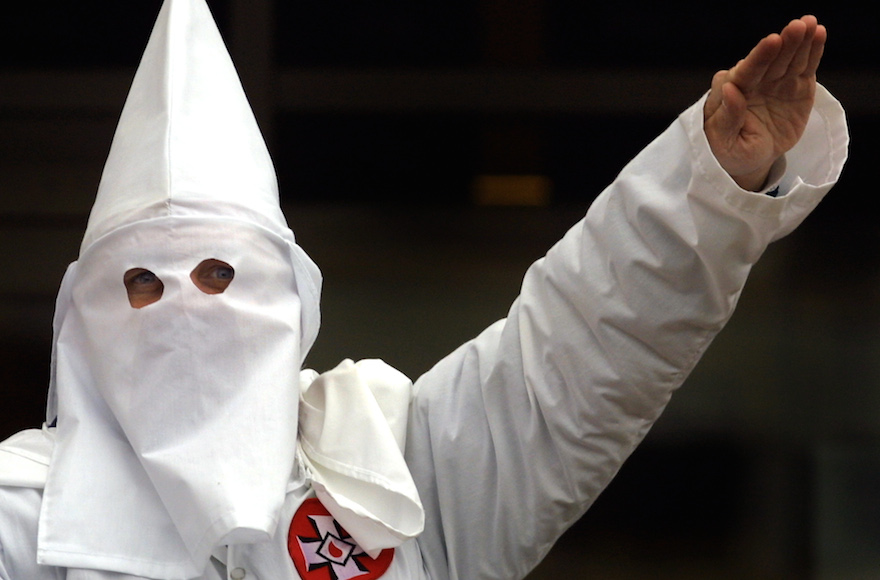 A KKK member at a rally in Skokie, Il., in 2000. (Tim Boyle/Newsmakers/Getty Images)
Advertisement

WASHINGTON (JTA) — The Ku Klux Klan still “poses a threat to society,” though it is relatively unstable and unorganized, according to the Anti-Defamation League.

The findings of an ADL report released this week found that 42 KKK groups are active in 33 states, with an estimate of some 3,000 members. More than half the groups were either formed or restarted in the past three years.

Most of the groups are concentrated in the South and the East, with a slight increase since early 2016.

The report showed that some groups not only are still involved in criminal activity and violence, but have formed alliances with other white supremacist groups in hopes of restoring their continuity.

But their main activity is the “distribution of racist, anti-Semitic, homophobic and Islamophobic fliers,” the report said.

“These hardened racists and bigots are looking to spread fear,” Jonathan Greenblatt, the ADL’s CEO said, “and if they grow dissatisfied with the Klan, they move on to other groups on the extreme far-right.”

Oren Segal, the director of ADL’s Center on Extremism, said that despite the hate group’s decline from its heyday, “we are still seeing the same extremist ideology manifesting itself into violence from some of its purported membership.”

“The somewhat new collaboration with some of the most vehement white supremacists out there is a concerning trend we will continue to monitor and expose.”