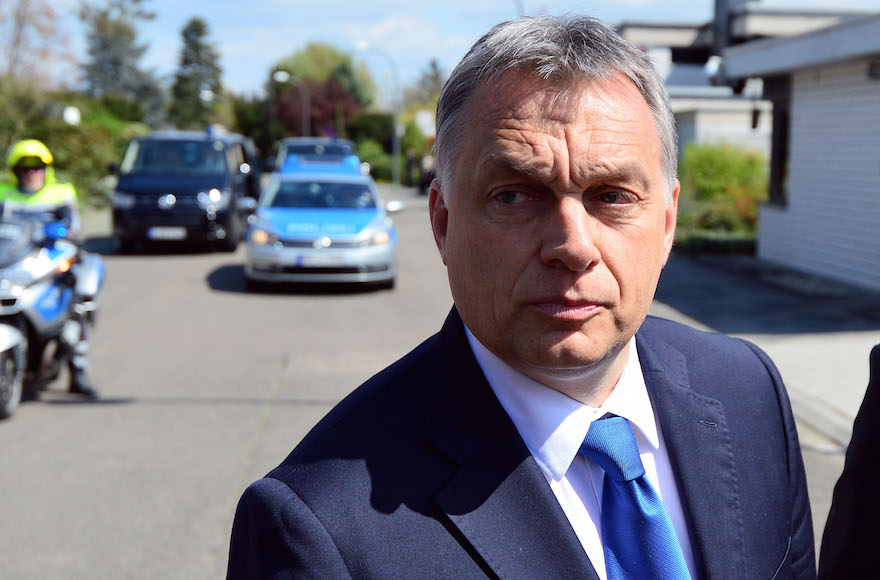 (JTA) — Hungarian Jews condemned their prime minister’s praises for a former leader who was an ally of Adolf Hitler and oversaw the murder of more than 500,000 Holocaust victims.

In a speech Wednesday, Viktor Orban included Miklos Horthy among those he called “exceptional statesmen” in Hungary for leading the country following the disintegration of the Austro-Hungarian Empire after World War I. Horthy signed anti-Jewish laws in 1938 and 1939, as well as in 1920.

András Heisler, the president of the Mazsihisz umbrella group of Hungarian Jewish organizations and communities, said in a statement Friday that “the serious historical experience of our community proves that our country had been buried by the history of the 20th century – largely by Miklós Horthy’s actions.”

The anti-Semitism of the Horthy era, “which he also espoused, cannot be put as an example for the future generations,” Heisler added. He also wrote that Horthy was responsible for the murder of the majority of Hungarian Jews.

“We think it would be more advanced if the contesting political parties would focus on the questions of present and future instead of evaluating Horthy,” the statement concluded.

Mazsihisz and other Jewish groups have clashed repeatedly with Orban’s right-wing government over the veneration of individuals from Hungary’s past whose legacy is divisive because of their anti-Semitic views or actions.

Wary of losing support to the far-right Jobbik party, Orban’s ruling Fidesz has cracked down in recent years on liberal activist groups and increased efforts to celebrate figures like Horthy, Gyorgy Donath and Balint Homan – politicians who are considered patriotic by the right but whom many Hungarians view as dishonorable.