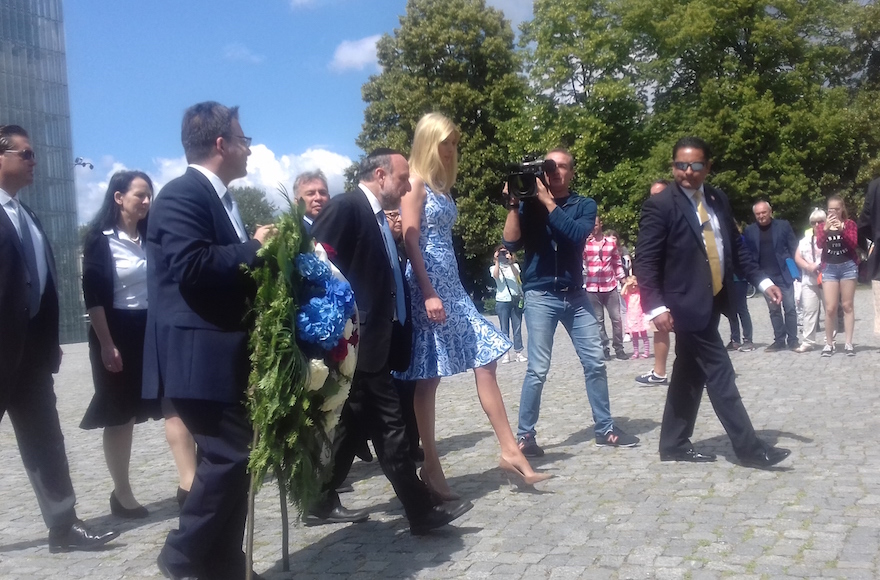 Ivanka Trump at the
Advertisement

(JTA) — Ivanka Trump, the Jewish daughter of President Donald Trump, laid a wreath at the memorial for the Warsaw Ghetto Uprising in Poland a day after her father was rebuked by Jewish leaders in that country for not visiting the same site.

Ivanka Trump, a convert to Judaism, was at the Monument for the Ghetto Heroes in Warsaw early Thursday afternoon, shortly before her father laid a wreath and began a speech at the nearby Warsaw Uprising Memorial, which celebrates the acts of resistance fighters from the general population of Poland who launched a bloody rebellion against the Germans in 1944.

The Monument to the Ghetto Heroes, located approximately a mile east of the uprising memorial at Krasinski Square, commemorates specifically Jewish partisans who rose up against the Germans in a doomed uprising in 1943.

The president’s daughter was accompanied by Rabbi Michael Schudrich, the chief rabbi of Poland. After laying a wreath at the ghetto memorial, she visited the POLIN Museum of the History of Polish Jews. Ivanka Trump’s visit to the memorial was a late addition to her schedule in Poland, the French news agency AFP reported.

In a statement issued by the White House, she called her visit to the monument and the POLIN Museum “a deeply moving experience.”

“It was a privilege to pay my respects and remember, with gratitude, those who tenaciously fought against all odds,” she said. “The monument, erected on the rubble of the Warsaw Ghetto, symbolizes the fight for freedom. I am profoundly grateful for those who fought and all those who continue to fight today.”

It was deeply moving to be able to visit The Monument to the Ghetto Heroes and the POLIN Museum of the History of the Polish Jews. pic.twitter.com/hmAGvnj4Ey

Barbara Kirshenblatt-Gimblett, chief curator of the core exhibition of the Museum of the History of Polish Jews, told JTA: “I think what is important is that she came. She was very respectful, very interested and I think she was really genuinely moved. My hope is that she will come back and she will bring her family with her.
“The cup may be half empty or half full. I would say the cup is half full and she [Ivanka] is half and we are missing the other half, but I want to appreciate the half that we got.”
Ivanka Trump at the museum saw a replica of the synagogue in Gwoździec and parts of two galleries. She also heard the story of the grandfather of Piotr Wiślicki, the president of the Jewish Historical Institute Association, Waclaw Wiślicki, who was a member of the Polish parliament in the 1920s and ’30s.
Schudrich told AFP that Ivanka Trump’s visit to the memorial was “very, very important … not only because she’s a Jew, because her grandparents-in-law are survivors of the Holocaust, but also as a human being it’s important.”

“But it’s sad because her father, President Trump, is the first U.S. president in 25 years not to visit the Warsaw Ghetto Heroes Monument,” he said.

According to the statement, “ever since the fall of Communism in 1989, all U.S. presidents and vice presidents visiting Warsaw had made a point of visiting” the site, representing Americans “who had played such a central role in bringing down Fascism.” The monument, they said, was a “universal commemoration of the victims of the Shoah, and condemnation of its perpetrators.”

During his speech at the Warsaw uprising memorial, the president acknowledged the decimation of Poland’s Jewish population by the Nazis while recalling Poland’s turbulent history.

“Under a double occupation, the Polish people endured evils beyond description: the Katyn forest massacre, the occupations, the Holocaust, the Warsaw Ghetto and the Warsaw Ghetto Uprising, the destruction of this beautiful capital city, and the deaths of nearly one in five Polish people,” Trump said. “A vibrant Jewish population — the largest in Europe — was reduced to almost nothing after the Nazis systematically murdered millions of Poland’s Jewish citizens, along with countless others, during that brutal occupation.”

He referred to the Warsaw uprising memorial, saying “This monument reminds us that more than 150,000 Poles died during that desperate struggle to overthrow oppression. From the other side of the river, the Soviet armed forces stopped and waited.  They watched as the Nazis ruthlessly destroyed the city, viciously murdering men, women and children. They tried to destroy this nation forever by shattering its will to survive.”