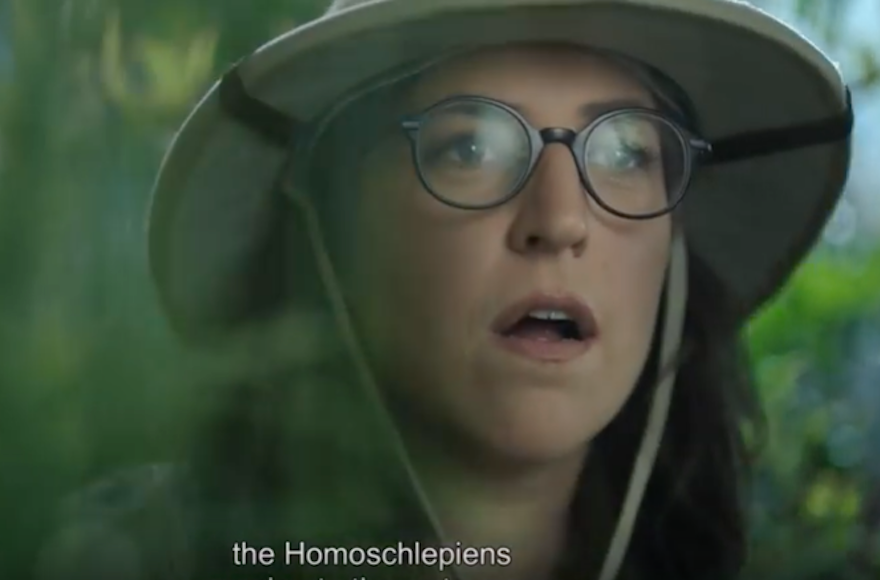 Mayim Bialik stars as an anthropologist in a new commercial for SodaStream. (Screenshot from YouTube)
Advertisement

In a humorous commercial for Israeli seltzer company SodaStream, the Jewish actress (“The Big Bang Theory”) and neuroscientist stars as an anthropologist in the year 2136 recalling an encounter with a near-extinct species: “The Homoschlepiens.”

The Homoschlepiens — among them actor Kristian Nairn (Hodor from “Game of Thrones,” in a very Hodor-like role) — are defined by the fact that they cannot drink water that doesn’t come from a plastic bottle. Bialik talks about the species to a group of school kids who are gathered at “The Museum of UnNatural History;” the children, who live in a world without plastic bottles, are shocked.

Bialik then touts the benefits of the SodaStream machine to make sparkling water at home — no plastic bottles needed.

The commercial, which was shot in Ukraine, was a good fit for the Jewish actress, who is passionate about the environment.

“As a species, we have evolved so much, but much as we know plastic bottles pollute our environment and kill marine life, we continue to use them,” Bialik, 41, told JTA in an email. “Single-use plastic bottles should be a thing of the past and belong in a museum!”

“My love affair with the environment started as a teenager: I was fascinated with all animals and with marine animals in particular,” she added. “Even in high school, I used canvas bags instead of paper or plastic and was ridiculed for it; it wasn’t part of our collective consciousness yet as a society to reduce and reuse yet!”

Even small changes can make a difference, she said, noting that “recycling is better than nothing.”

Still, “recycling itself is a ‘dirty’ business that involves robust industrial system of transportation and facilities which ironically are highly contaminating on their own,” she wrote. “This is why I think that the future lies in reduction at the source — and this is what SodaStream stands for and it’s why I am so happy to be a part of this campaign.”

SodaStream isn’t without controversy. The Israeli company — and its spokesperson at the time, Scarlett Johansson — was the target of boycotts due to having its main factory in a West Bank settlement. In 2015, SodaStream closed its West Bank location and moved its operations to southern Israel.