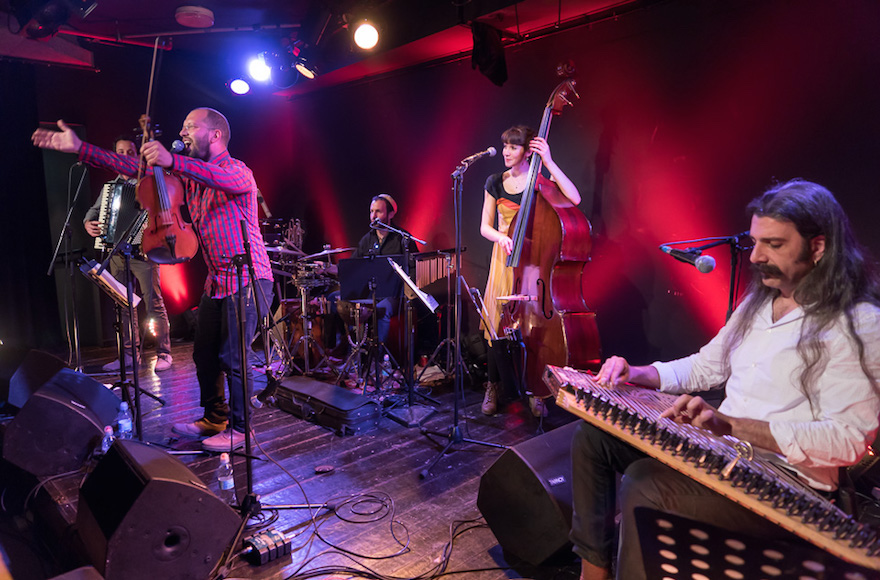 Tickets can be purchased for individual concerts.

A highlight of the festival is Saturday night’s performance of the folk oratorio “A Night in the Old Marketplace” (Bay nakht afn altn mark), a musical retelling of a 1907 I.L. Peretz play.

For the 17th year, the Festival of Yiddish Culture, known as Yiddish Summer Weimar, will bring Jewish culture to a region marked both by historic Jewish cultural ferment and tragedy.

This year’s festival features 14 workshops (including some on Yiddish language), story-telling, lecture series and ensemble concerts with artists such as Gulaza, Lenka Lichtenberg and Yair Dalal, the Hasidic band The Heart and Gershon Leizerson and The Yiddish Blues Drifters.

A focus of this year’s Yiddish Summer Weimar is the ethnic diversity of Israel. As part of a youth exchange program, Voices of Peace, an Arab-Jewish choir from Jaffa, will collaborate with Weimar‘s Schola Cantorum in a musical setting of children’s poems by the Polish-Yiddish author Kadya Molodowsky.

Held each summer since 1990, the North American Jewish Choral Festival — sponsored by the Zamir Choral Foundation — draws hundreds of participants for five days of intensive workshops, study and concerts at a resort in Kerhonkson, New York. Special workshops are being held this year for singers and leaders of synagogue congregational choirs, with performances by select synagogue choruses.

Presented by the Jewish Film Institute for the past 37 years, San Francisco’s is the longest-running festival of its kind, attracting more than 40,000 film-goers and industry professionals for almost three weeks of films, events, panels and parties. Screenings take place at the historic Castro Theatre in San Francisco and venues throughout the Bay Area.

This year’s highlights include an opening night screening of “Keep the Change,” a documentary about a community of adults living on the autism spectrum; “The Boys Downstairs,” starring Zosia Mamet of “Girls”; and a series of films that examine the experience of refugees. Over 40 percent of the official selections are by women directors, and the opening and closing nights feature films by women making their directorial debuts.

Former Vice President Al Gore will attend a screening of “An Inconvenient Sequel: Truth to Power,” the follow-up to Gore’s 2006 documentary “An Inconvenient Truth,” about the dangers of climate change. The screening will take place Monday, July 24 at the Castro Theatre at 7:30 p.m.

Held every summer since 1997, the former Jewish Summer Festival focuses on the important part Jews played in Hungary’s history. Action centers around Budapest’s Great Synagogue, the Rumbach Street Synagogue and Goldmark Hall. In addition to klezmer and cantorial concerts, the festival will include a book fair, film screenings, photo and fine arts exhibitions and culinary programs.