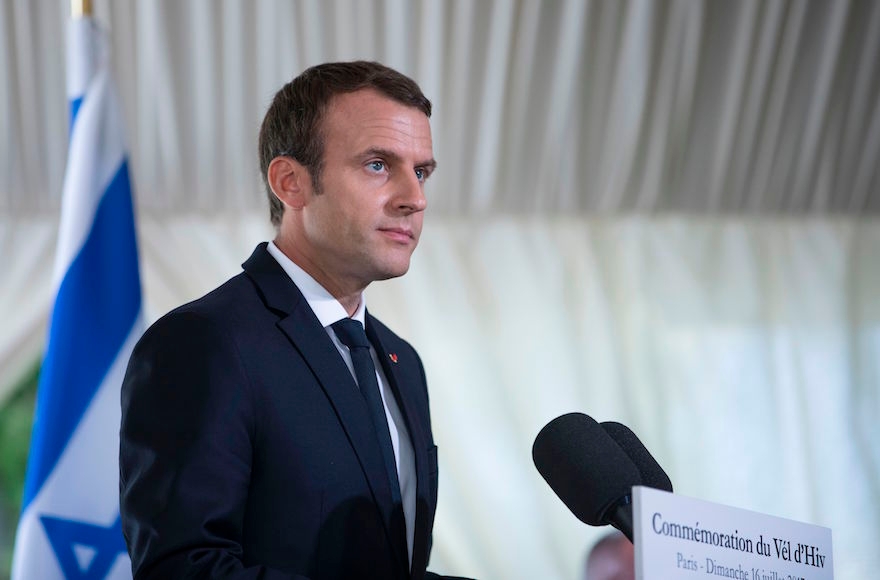 PARIS (JTA) — It wasn’t the first time that a French president acknowledged his nation’s Holocaust-era guilt, but Emmanuel Macron’s speech Sunday was nonetheless groundbreaking in format, content and style.

Delivered during a ceremony at the Vel d’Hiv Holocaust memorial monument exactly 75 years after French police officers rounded up 13,152 Jews there for deportation to Nazi death camps, the 35-minute address was Macron’s first about the Holocaust since the centrist won the presidency in May.

Evocative and more forthright than any of the speeches on the subject delivered by Macron’s predecessors, his address “relieved the feeling of isolation” experienced by many Jews due to anti-Semitism today, according to Rabbi Delphine Horvilleur of the Liberal Jewish movement in France.

Macron’s speech “made me proud to be French and Jewish,” she said.

Here are seven significant ways that the address differed from those of previous French presidents, including in scope; the unusual role played at the event by Israeli Prime Minister Benjamin Netanyahu; its references to present realities, and Macron’s emotional delivery.

It was the first time that an Israeli head of state attended the annual commemoration for the Vel d’Hiv deportations of July 16-17, 1942, named after the Velodrome d’Hiver stadium that used to stand near the monument.

Netanyahu was invited despite objections on Muslim websites, by the Communist Party  and the party of the far-left leader Jean-Luc Melenchon — although the invitation came from the CRIF federation of French Jewish communities and not by the Elysee Presidential Palace, as reported by some French media. The Elysee, which organized the event, did not object publicly to Netanyahu’s attendance and facilitated it.

The arrival of Netanyahu and his wife, Sara, in a motorcade whose limousines sported gold-fringed Israeli flags electrified the predominantly Jewish audience of 1,200 people. Holocaust survivors in their 80s and 90s approached the monument railing to catch a glimpse of the Israelis as others reacted with thunderous applause.

They oohed and applauded as Netanyahu delivered the first part of his speech in French, which he speaks with a thick accent and some errors, but understands without requiring translation. And they nodded as he urged Macron to stand with Israel and fight “the cancerous spread of militant Islam” and “hate that starts with the Jews but never ends there,” as Netanyahu defined it.

But their enthusiasm for Netanyahu was dwarfed by the deafening applause they gave Macron when he responded to Netanyahu.

Anti-Zionism and the reinvention of anti-Semitism

Addressing Netanyahu, Macron assured the Israeli leader and listeners that “we will continue our fight against terrorism and the worst kinds of fanaticism,” adding: “So yes, we will never surrender to the expressions of hatred; we will not surrender to anti-Zionism because it is a reinvention of anti-Semitism.”

Articulated in recent years by Manuel Valls, a former prime minister of France, Macron’s statement was the first time an incumbent president in France equated anti-Zionism – a fairly popular sentiment in France – with anti-Semitism. It triggered several emotional yelps from the audience and applause so vigorous, it caused the tarp strung up over the monument plaza for security reasons to vibrate.

There was another wave of applause when, unusually, Macron and Netanyahu hugged publicly after Netanyahu’s speech.

Much of Macron’s speech was devoted to establishing France’s complicity in the murder of 25 percent of its Jewish population during the Holocaust and deconstructing apologist views on the subject.

Speaking plainly and avoiding metaphors, Macron sounded less like a politician than a historian or a prosecutor who is committed to factual accuracy.

In the first admission of Holocaust culpability by a French president, Jacques Chirac in 1995 said that “Frenchmen, the French state assisted the criminal folly of the occupier,” resulting in a failure to uphold the nation’s values and an “irreparable crime.”

And Francois Hollande in 2012 said the roundups were a “crime committed in France, by France.”

But the Macron address delivered Sunday “was a precedent-setting speech that went deeper, on a pedagogic level, than addresses that preceded it by French presidents,” said Serge Klarsfeld, a historian and one of France’s leading researchers on the Holocaust. 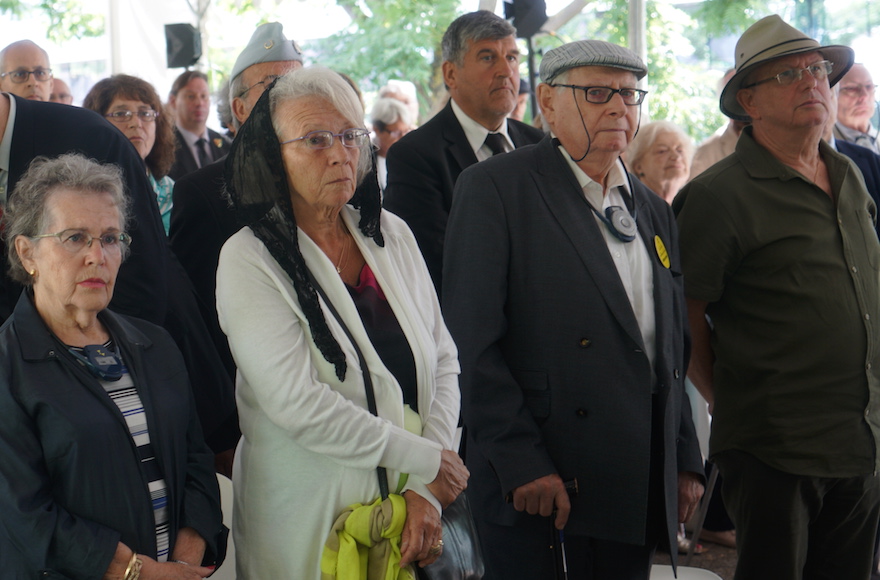 Members of the audience listening to French President Emmanuel Macron near the Vel d’Hiv memorial in Paris, July 16, 2017. (Cnaan Liphshiz)

Macron’s speech was the first presidential address that named individual collaborators who helped the Nazis kill Jews, including René Bousquet, a police chief who was indicted for planning the Vel d’Hiv roundups, but died in 1993 before his trial.

“France organized the roundups,” Macron said. “Not a single German participated.” And so France “in almost every aspect organized the death” of the victims.

More jarringly to many French ears, he said the collaborationist Vichy government “was not replaced overnight” by the free French government that succeeded it after the country’s liberation in World War II.

“Ministers, civil servants, police officers, economy officials, unions, teachers” from the Vichy government were all incorporated into the Third Republic that replaced it, Macron said.

By touching on France’s perceived failure to purge itself of collaborators and their legacy, Macron differentiated himself from all of France’s presidents after Francois Mitterrand. Klarsfeld praised Macron for pointing out how Mitterrand and postwar leader Charles de Gaulle “remained silent on the historical truth” about collaboration “in favor of appeasement and reconciliation.”

Macron said he “does not judge” his predecessors who remained silent on the issue.

During his speech, Macron said “It is very convenient to view Vichy as a monstrosity, born of nothing and returned to nothing.” But it is “false. We cannot base any pride on a lie.” Rather than weaken the French nation, as argued by National Front politicians, admitting its guilt “opened the path to correcting” its faults, Macron said.

Speaking about the Vichy puppet government, Macron deconstructed the main revisionist talking points put forward by the French far right led by the National Front party under Marine Le Pen. In April, Le Pen argued that the government’s actions in World War II do not represent France as a nation.

“I reject the attempts to absolve one’s conscious by those who claim Vichy wasn’t France,” Macron said. No other French president had said this in these terms.

Responding to repeated pleas by French Jews – including at the Vel d’Hiv event during a speech by CRIF President Francis Kalifat – Macron for the first time commented on the death of Sarah Halimi.

Halimi, a 66-year-old physician, was killed by a Muslim neighbor, Kobili Traore, who shouted about Allah before he killed her. Halimi’s daughter said that Traore had called her a “dirty Jew.” Yet in what CRIF considers a “cover-up,” the indictment filed against Traore last week does not categorize the killing as a hate crime.

In his address, Netanyahu counted Halimi among other French Jews murdered in recent years by Islamists.

Macron replied: “Despite the denials of the murderer, the judiciary must as soon as possible provide maximum clarity on the death of Sarah Halimi.” Klarsfeld said it was a strong message that will “probably induce change” in how Traore is tried.

A rational and analytical thinker with a background in banking and economics, Macron surprised many of his listeners with the apparent intensity of his intonation and body language during the speech.

“Above all, the speech was special for his palpable emotion,” Horvilleur said.

Like many others Horvilleur, the Liberal rabbi, was “deeply moved” by Macron’s remarks at the end of his speech about how the children deported from Vel d’Hiv informs how he views his role as president.

Children “who wanted to go to school, graduate, find work, start a family, read, watch a show, learn and travel,” he said. “I want to tell those children that France has not forgotten them. That she loves them. That their tragic fate demands of us never to give up to hate, rancor or despair.”