Forget BDS. It’s anti-normalization you should be talking about. 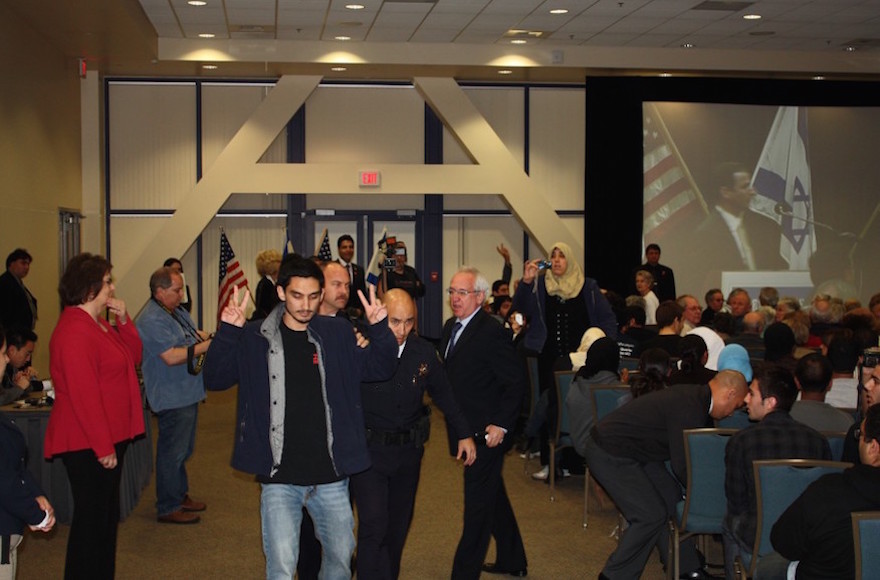 A protester being removed by campus police at the University of California, Irvine, after he disrupted a speech by Michael Oren, who was then Israel's ambassador to the United States, Feb. 8, 2010. (JTA)
Advertisement

So you wanna understand Israel-Palestine debates on campus?

The first thing you have to do is stop talking about BDS.

But really, the Boycott, Sanctions and Divestment campaign against Israel isn’t what Israel conversations on campus are all about these days. Campaigns to pass BDS measures on major campuses are actually in decline, yet somehow they still make up the bulk of Jewish news about students.

The truth is, divestment proposals happen perennially, people freak out for two to three weeks, and then students on all sides return to lives of calculus, life pondering, activism and 3 a.m. pizza.

Anti-normalization. Because it creates a fascinatingly complex new landscape for Jewish students, who are both on its receiving end and active participants.

If you know what I’m talking about, skip this paragraph, wise one. If you don’t, anti-normalization is an idea, popular on the left, that some beliefs are so untenable you cannot allow them to be left unprotested and accepted as normal. That means calling attention to their proponents at the very least and having a zero-tolerance policy at most.

That means pro-Palestinian activism on campus looks different these days – because all activism looks different. Instead of boycotts, a more frequent form of campus organizing is protesting at and disrupting Israel-related events.

A brief history: One of the earliest instances of interrupting Zionist speakers on campus happened at the University of California, Irvine, in 2010, when students disrupted a speech by former Israel ambassador to the U.S. Michael Oren. In 2015, the same thing happened to former Israeli Supreme Court Chief Justice Aharon Barak at the same school and Israeli philosophy professor Moshe Halbertal at the University of Minnesota. In 2016, it was Jerusalem Mayor Nir Barkat at San Francisco State University.

What recently happened at the Chicago Dyke March is also a prime example. Women marching with what march organizers saw as Zionist flags could not be allowed to stay because that would be letting Zionism go unchallenged.

What does this mean?

For what it’s worth, speaker shutdowns and event protests don’t make us special. If you follow campus news, these are happening everywhere to all kinds of speakers, from controversial scholar Charles Murray at Middlebury College in Vermont to conservative commentator Anne Coulter and “alt-right” provocateur (read: troll) Milo Yiannopoulis at the University of California, Berkeley.

What does it mean to Jewish students that Zionist speakers are considered indefensible alongside alt-right speakers? Are Zionist students and pro-Palestinian activists defining Zionism the same way?

Pro-Israel activists, meanwhile, are arguably already engaging in their own form of anti-normalization rhetoric and have been for a long time. One could even argue that Jews were anti-normalization pioneers. When anti-Semitic or anti-Zionist remarks on campus are labeled “hate speech,” that’s our community declaring ideas too unconscionable to be expressed without protest. Jewish outcry over Linda Sarsour speaking at CUNY is only one recent example. Right-wing Jewish organizations, like the AMCHA Initiative or Canary Mission, marked speakers, professors and student leaders as too reprehensible for campus before it was cool.

Whatever term you want to use, this isn’t just a leftist movement, and Jewish students across the political spectrum are experiencing it and are a part of it.

We can argue endlessly about whether anti-normalization is good or bad – and we are. Questions about this concept are at the core of today’s most fraught campus debates. Does declaring ideas unredeemable limit free speech? Or does it marginalize systemic societal ills? Who decides the parameters, and when are they too broad?

I cannot answer any of these questions. (That’s a different, much longer article.)

But I can call on our community to recognize them. It’s time we see the anti-normalization forest through the BDS trees. Because until we do, we’re missing out on the juicy stuff – the larger debates happening on campus and the real questions Jewish students are asking themselves.

(Sara Weissman, editor@newvoices.org, is the editor in chief of New Voices, where a version of this article originally appeared.)